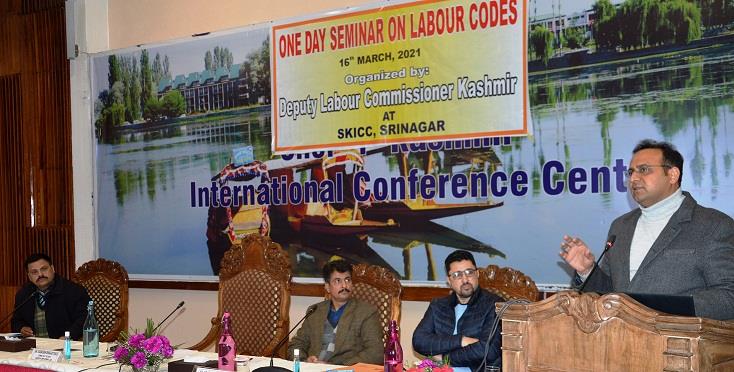 Labour codes changed, previous books of no use: Saurav Baghat

Srinagar: The Commissioner/ Sectretary Labour and Employment, Saurabh Bhagat today stated that the Labour legislations have changed and the old books of Labour codes are of no use now.

The Commissioner/ Sectretary Labour and Employment, said this during a seminar organized by the Labour Department of Kashmir on Labour Codes for Assistant Labour Commissioners, (ALCs), Labour Officers and Labour Inspectors at Sher e Kashmir International Conference Center, Srinagar.

Speaking on the occasion, Bhagat said that J&K is the first among all the states and union territories in the country to prepare rules for Labour Laws which are awaiting approval. He said legislations regarding Labour have changed and previous books based on Labour laws are of no use now.

He said synthesis of new Labour codes at the central government level is in progress to be implemented for Pan-India.

He impressed upon the officers to educate themselves with new rules and update their knowledge. He said ALCs shall be included in committees which would perform as master trainers to educate concerned organizations and departments including industrial associations, labour associations, BAR Councils of District Courts and High Court, universities etc.

He suggested inter-district movement and specialization of trainers.

Further, he said all the outside Labours working in the UT shall be registered with the department.

Besides, he said the Labour department shall be the single source of the dissemination of information regarding the beneficiary schemes.

Moreover, he stressed on the officers present to discourage the simultaneous functioning of the offline and online registration of Labours. He directed them that no offline registration shall happen after the Ist April besides he told them to digitize all the procedures and documents. He informed that the target of three lakh registrations shall be achieved within the fixed time.

Also, he directed ALCs to visit Block Divas programmes to make online registrations so that the pendency is zero.

Speaking on the occasion, Labour Commissioner, Abdul Rashid War, asked the Officers present to be responsive and display responsibility for performing on the ground. He admonished them for any diligence of work and told them that keen watch is being put on the efficiency of officers. He asked the officers that files shall not be held for more than three days.