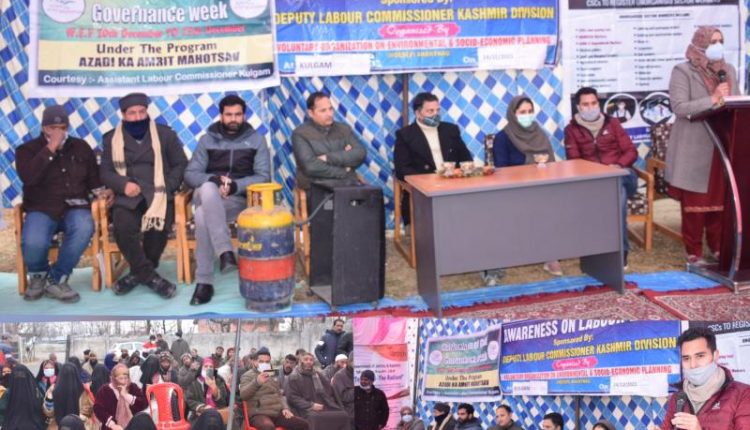 KULGAM : To generate awareness among unorganised workers about the e-SHRAM portal and various schemes of the department, the Labour Department today organized a daylong programme for unorganized workers, here.

The programme was organized under Good Governance week.

The awareness programme was attended by scores of unorganised workers from across various departments like Health, Rural Development, Social welfare, Agriculture etc, who were made aware about the e-SHRAM portal and its subsequent benefits.

The unorganised workers were also given awareness regarding various welfare schemes, operated by the Department of Labour.

On the occasion Deputy Labour Commissioner Kashmir, Ahmad Hussain detailed the participants about the schemes operated by Department like e-shram, Atal Pension Yojana, Prime Minister’s Shram Yogi Maandhan Yojna and pressed upon all the workers to get themselves registered within the ambit of these schemes, so that the benefits of Social security schemes reach to them timely.

During the programme awareness regarding various labour laws was also shared with participants.

Meanwhile an on-spot registration camp was set-up by the Labour Department Kulgam during which scores of unorganized workers belonging to various sectors were registered on the e-SHRAM portal.

UCL: More than a third of care home residents caught Covid-19 in early waves of…

iednewsdesk Jan 22, 2022
The study, published in The Lancet Healthy Longevity, looked at blood samples from nearly 5,000 residents (with a…