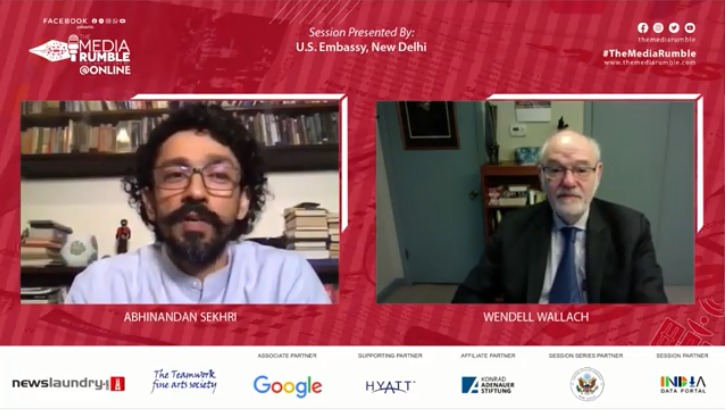 Lack of internet ethics, media-police nexus, and the need for minority voices in mainstream reportage at TMR@Online 2020

New Delhi: The second day at TMR@Online, the digital edition of the annual news media forum, The Media Rumble (TMR), featured a slew of thought-provoking conversations on caste and community representation, ethics and morality in the digital world, the perils of propaganda and hate media and a discussion on police reforms and the media-police relationship in reference to the Batla House Encounter.

Ahead of the anniversary of the Batla House Encounter on Sep 19th, the second day at the ongoing online edition of The Media Rumble started with the session Batla House Encounter, Police Reform and the Media-Police Relation. Sanjoy K. Roy, MD Teamwork Arts, spoke to Karnal Singh, a 1984-batch IPS officer and author of BATLA HOUSE: An Encounter That Shook the Nation and Meenal Baghel – Editor of Mumbai Mirror, and author of Death in Mumbai, a non-fiction account of a high-profile murder case of a TV executive in Mumbai in 2008. Karnal Singh gave a detailed account of the Batla House Encounter and brought to light the finer points of the police investigation including the use of media and technology. He emphasised on the need for better training, innovation and police reforms, highlighting the shortage of manpower, lack of sensitivity training and professionalism amongst the police force. On the question of how media trials influence investigations, Meenal Baghel said, “In Mumbai, police, and media have a symbiotic relationship; cops always want to plant something juicy, some red herrings to titillate, what goes behind the media trial and the real story is often something else.” Speaking about the role of journalists, Baghel highlighted the need for healthy scepticism and the importance of source veracity and fact-checking. The session also touched upon the importance of selecting the right people and the right training in both the police and the media, the sense of déjà vu in the Sushant Singh Rajput case which is a scathing reflection of how high-profile cases are often sensationalised, and the responsibilities and the need for sensitivity in both the media and the police in their handling of investigations including the urgent need for administrative reforms.

The subsequent session on Hate Media: When propaganda masquerades as the news and its impact on a nation’s social fabric was moderated by Maya Mirchandani, a Senior Fellow at the Observer Research Foundation and Assistant Professor of Broadcast Journalism and Media Studies at Ashoka University. The panel comprised John Ralston Saul, an award-winning essayist and novelist and General Roméo Dallaire, the founder of the Dallaire Institute for Children, Peace, and Security.

The discussion started with Maya Mirchandani pointing out the concerns raised with the state of the media, particularly the broadcast media, all over the world and the Indian media landscape; comparing it to Radio Rwanda, which was used extensively for propaganda and instigating violence. General Roméo Dallaire highlighted the sheer volume of today’s advanced media technology which allows for a much more powerful and real-time engagement than radio, including visual amplification of messaging and how one can easily lose control of things in such a reality. John Ralston Saul spoke about the history of hate speech, including the use of cartoons by the Nazis. He also spoke of how very simple pieces of speech in hate propaganda are normalised and used to dehumanise those that are being targeted.

The discussion then veered towards freedom of expression in the context of news media and the responsibility of writers, including journalists. Saul talked about the charter of PEN International which believes in unlimited freedom of expression but also highlights the responsibility that, at no time, must journalists and writers engage in provoking hatred, marking a critical difference between a writer and a propagandist. Commenting on the role that the internet plays, he said that while the internet allows the whole world to be thrown open to users in a very idealistic, albeit a naïve way, the owners of it never had any interest in free speech and continue to refuse to take responsibility as publishers or editors of information.

Speaking about social media in particular and the responsibilities of social media companies, General Roméo Dallaire said that “there are no more borders in the world when it comes to influencing the world” and that social media technologies are “not necessarily neutral”, given that they can be influenced by monetary and/or regulatory power. The panel then spoke about possible restrictions and regulations, who decides what these regulations can or should be and how to implement them. Comparing it to any other technological advancement which can and has been used for both the development and destruction of humanity, Saul concluded that social media and the internet too needed to be regulated and an agreement on its usage be reached at both regional and international levels.

Wendell Wallach, an ethicist and scholar at Yale University’s Interdisciplinary Center for Bioethics, has been at the forefront of contemporary emerging technology issues for several decades. Long before what we now recognise as Artificial Intelligence, his work has explored the intersections of ethics, governance, philosophy and AI. What began as a wide-ranging interest in the role that ethics would play in emerging technology, he now focuses on machine ethics and AI governance. In a session with Newslaundry’s Abhinandan Sekhri, Wallach discussed the need to balance innovation with transparency, and ultimately who is responsible when it comes to the issue of machines vs morality. When it comes to journalism, a recent Guardian article beginning with the words “A robot wrote this entire article. Are you scared yet, human?” has raised questions over whether machines will make a mark in media. In the conversation, Wallach said he was sceptical, believing if we can approach an AI world with thoughtful foresight and develop it as an extension of human capabilities, it could enhance the way in which we engage with one another.

He further said that he did not think that media jobs have to be in jeopardy; but, if you have unscrupulous employers who just want to get information out and are not truly involved in educating the public, then some jobs would be lost.

Results of preliminary round of first ever Fit India Quiz…

Wendell also remarked that the people who created social media had no idea that social media can be used by unscrupulous actors to destroy democracy. He spoke about the big concern in the USA or UK, whether the Brexit was manipulated and how effectively manipulation has been pervading America (which we will find out in 60 days!); and how this should also concern India. He talked about ethics washing and public corporations who are more concerned with the optics of seeming ethical and not being ethical. Unfortunately, they take their responsibility towards their stockholders more seriously than their responsibility of being good citizens.

Abhinandan asked about the basic structure of the algorithms of AI and if it had been based on a flawed structure and whether we can go back and change it. Wendell’s reply was a warning – the internet, he said, had been designed in a way that decentralised it and it facilitated its growth; but, the very nature of its design makes privacy and security a nightmare! “So, we will have to redesign the internet. There are moves to create unbiassed training data to flag the actual biases that exist,” he conveyed.

The final session of the day, Caste and Community Representation in Newsroom, moderated by Afrida Hussain, Founder & Editor-in-Chief, INSIDENE, featured Atul Chaurasia, Executive Editor of Newslaundry; Mridula Devi S. Editorial Board member of Patabhedam magazine, and Dr. Suraj Yengde, India’s first Dalit Ph.D.-holder, leading public intellectual and a scholar of caste studies. The session touched upon a range of issues related to media and the divide between the dominant and marginalised castes.

Mridula Devi S. pointed out that the Dalit and Adivasi viewpoint is missing from mainstream media. She gave an example of a Dalit COVID patient who was raped in an ambulance – the girl subsequently attempted suicide and there was hardly any media attention to this case. Mridula opined that caste in India is social and cultural capital and has given the privilege to the dominant class, limiting the share of the voice of the minorities.

Atul Chaurasia highlighted that diversity in the newsroom is seen as a critical issue and a matter of pride within the Western media. However, in India, there is no transparency regarding this and there is an extreme lack of minority representation at the senior and more public-facing positions, especially in television. He also pointed that Dalit, Adivasi and other minority journalists are unable to break into mainstream media as many positions are often not posted publicly but rather hired via references or personal contacts.

In response to Afrida Hussain’s question about Dalit stories being written by upper-caste journalists, Dr. Suraj Yengde said, “Whenever a Dalit protest happens for their civic or constitutional rights, read the headline, blurb and the news report. There are several biases: the person who is writing might not be malicious, but by the virtue of their status in the caste system, they were not sensitised to write the news in a way that would present the Dalit democratic practice as something to be proud of.” He further stressed that Dalits and Adivasis are now 26% of India’s population; they amount to more than 380 million people. “Let’s digest that staggering number and we don’t have even a daily newspaper that will report our activity,” he concluded.

The evening also featured exclusive stand-up comedy acts by Aditi Mittal and Abhijit Ganguly taking pot-shots at the state of the media in India. Sparing no one, Mittal’s act began and ended with parodies on the news media as a whole but was peppered with commentary on nearly every major news outlet and media personalities. Ganguly’s act hinted more at the relationship between media and politics while taking jabs at screen-hungry faces across politics, news media and Bollywood.

Saturday at TMR@Online will feature discussions on media coverage of the Covid-19 pandemic, a look into the world of cinema including the representation of law and order and the shift towards more pragmatic storylines. There will also be two key discussions on the relationships EU has with Asia and its focus on India. The updated schedule is available on the website https://themediarumble.com/schedule and the sessions are accessible through free online registration at https://themediarumble.com/registration

Results of preliminary round of first ever Fit India Quiz declared, UP students top…