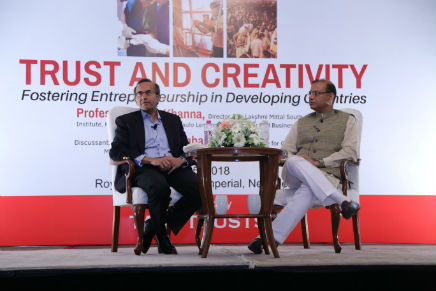 For more than two decades at Harvard Business School, Prof Khanna has sought to study the drivers of entrepreneurship in emerging markets as a means of economic and social development. He spoke about the Lakshmi Mittal South Asia Institute’s commitment to studying and researching all aspects of South Asia, alongside its partnership with major Indian institutions in arts, social entrepreneurship and life sciences. Mr. Sinha spoke about how entrepreneurship can improve economic growth of developing nations like India.

The Lakshmi Mittal South Asia Institute, Harvard University, is a university-wide research institute at Harvard that engages faculty and students through interdisciplinary programs to advance and deepen the teaching and research on global issues relevant to South Asia. Currently, Lakshmi Mittal South Asia Institute in India is running programs/research projects in India related to the arts, social science and the pure science. LM SAI also serves as a nexus for Harvard’s engagement with Afghanistan, Bangladesh, Bhutan, India, Maldives, Myanmar, Nepal, Pakistan and Sri Lanka, as well as diaspora populations from these countries.

University of Amsterdam: SusPhos is Frisian Startup of the Year 2021

iednewsdesk Sep 18, 2021
The EUTOPIA European University has announced its enlargement with three leading universities joining the…

University of Amsterdam: SusPhos is Frisian Startup of the Year 2021

University of Amsterdam: When the village gets bombed