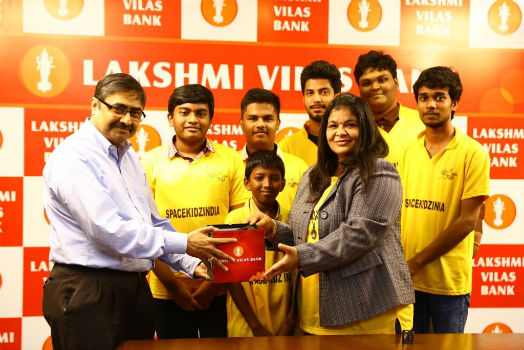 New Delhi: Lakshmi Vilas Bank, one of India’s fastest growing Banks, announced its support to Space Kidz India’s new project titled ‘NSLV Kalam-2’ selected by NASA. This is a 48 hour mission in which a payload, twice the size of Empire State building will be created. This payload will be flown in NASA’s scientific balloon that will be sent into the stratosphere. This project is aimed at understanding the feasibility of space tourism in India by equipping it with sensors to collect data and human DNA samples. It is also intended at devising a functional space printer in the honor of Dr. APJ Abdul Kalam. Eight students including six from Chennai have designed and developed this payload. The said balloon is set to be launched from NASA’s Langley Research Centre on August 24 or 31, depending on the presence of eclipse.

Applauding the efforts put in by children, Mr. P Mukherjee, MD & CEO, Lakshmi Vilas Bank, said “Our support to NSLV Kalam project is one of the many ways of LVB to reinforce its commitment to encourage the spirit of innovation among children. We decided to join hands with Space Kidz India with an objective to fuel young minds’ aspiration to reach the skies. Feats such as these ought to be recognized and motivated so that youth across the country take interest in science. Nurturing such talents will go a long way in creating a pool of innovators and scientists who would guide the nation to the forefront of the technological revolution that the world is witnessing”.

Dr. Srimathy Kesan, CEO, Space Kidz India, said, “We thank Lakshmi Vilas Bank for their support. Commitment by premier organizations such as LVB will not only boost morale, but will also provide buoyance to children’s wings who can reach the sky”.

LVB runs various initiatives such as education, development of girl child, rural sports, homes for elderly focus and supporting Government’s Swachh Bharat mission. The Bank is highly supportive of the involvement of its employees in its CSR initiatives and community activities of their choice and therefore proactively encourages their support to bank’s CSR activity.

Space Kidz India, is an organization creating international experimental leaning for students in the field of science, technology, art and culture. Space Kidz India, headquartered in Chennai, has conducted various contests for identifying young scientist to lead its projects. Its recent endeavor “Kalam Sat”, world’s lightest and first 3D printed satellite, has received large support world over, which stands testimony to its dedication and excellence. Space Kidz India team has won a spot in The NASA’s Balloon Challenge, 2017 conducted by “idoodleedu inc”.