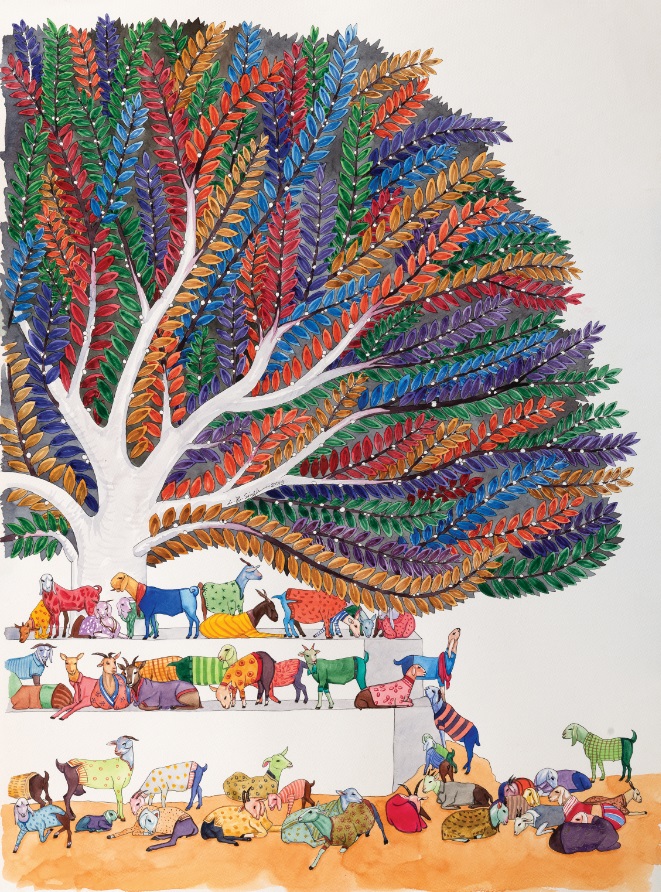 New Delhi: Lal Bahadur Singh, a young Indian contemporary artist, who brushes intensive storytelling, detailing, distinctive lines with the use of bright colours in his art. His selection of colours from the European colour palette gives his work an excellent and lively feeling. Singh’s paintings rejoice the journey of societal evolution from agrarian culture to a modernized state.

His paintings in bright and lyrical multi-coloured hues, with an amalgam of delicately rendered complex patterns. The paintings are aesthetically pleasing and displaying the essence of nature and rural life pictured as symbolic motifs. They celebrate the joy, festivals and cultural practices. They share close ties with the sustenance and livelihood of rural people. Those depictions share the changing rural –urban dynamics and capture the conflicts raised from the growing urban Cosmopolitanism.

Singh’s paintings are rhetorical, subtly drawing the viewer’s attention on disagreement and struggle between the two spheres of identity, existence and development. His paintings on combining the humanistic and material-based perspectives, his themes efficiently emphasize the necessity of maintaining harmony and coherence among the two domains. The diverse depictions convey the social message of preservation of environment and its judicious consumption without causing any violation or extinction of either its pristine forms or socio-cultural beliefs to the natives. It clearly depicts Singh’s rural upbringing in rural areas. His images are mostly quirky combinations that we least expect but identify almost instantly, and therein lies the beauty of his work. The depiction of the parrot, one of the most easily recognizable and symbolic birds in rural India, is extraordinary as they have been compared to an ever-changing urban background devoid of any human form. The cow and the bull are also very identifiable and well-known presence of rural India. His series of paintings tell the story of the changing face of life in rural and urban areas.

His Gond and Madhubani paintings have become the focus of the global art scene with its lively imageries and earthbound nature. Singh displays absolute command over his visual language irrespective of the mediums such as water colour and oil paint that he chooses to paint with. The closeness of the artist is not only seen in the mediums but also in the display of images based on nature which also gives the feel of the seasonal changes in the traditional miniatures including the Mughal and Rajasthani varieties. Singh’s paintings become an interface between the spring festival and the attendant figures of avian and beastly kind stand in ecstatic attention with the music of Orpheus (a Greek Poet).

His cow depiction has got conversational purchase among the social, political and cultural intellectuals of the country (universally bovine images are seen as stand in metaphors for divinity, motherhood and peace), at times dropping the debates over the top and turning emotional excess in the streets causing narrative disruptions, Singh does not address them

as a social reality, instead utilises the mythological side of the dense imagery enhancing it with various contextual stuff that create a silicon-screen separation between the visual narrative and the possible socio-political readings of it and makes it amply established that his meanderings through the bovine imageries are nothing but aesthetical and associative in terms of larger cultural ethos.

Singh wants to emphasize in all of his works irrespective of the avian or beastly images that he employs to bring it about. Some of his paintings show the image of an umbrella in its open and tilted forms sheltering a variety of animals and birds. This traditional visual as well as textual narrative of Krishna lifting Mount Govardhan in order to shelter the cowherds and their cattle packs from nature’s fury. It also reminds one of the Noah’s arch which is also a similar catastrophic situation chooses to shelter the beastly world for the future. The removal of human beings from his narratives makes Singh’s works more attractive.

Thus, Lal Bahadur Singh’s paintings could be called the work on coexistence where the human life and animals could live side by side without affecting each other. Singh’s unique take on another change with that of blatant urbanism at a macro level; forces us to look hard and deep within ourselves and has led him to be a desirable art collector. His themed collections are great as paintings for homes, corporate houses and museums. They have the capability to make any space instantly vibrant, colourful, contemplative and chic. They are also significant investments.

Born 1985. Lal Bahadur has carved a niche for his unique style, at a very young age. His artworks are reflections of collective memories drawn from the ruminations of rural life. They present a fresh approach to the very idea and practice of painting, the art in which he embellishes the images with associative references from the collective cultural makeup of his country where folklores are treated at par with legends and epics. Universal in vision, global in conception and deeply anchored in the traditional style of painting, Singh displays absolute command over his visual language irrespective of his varied mediums such as drawing, watercolour, oil painting, sculpture or murals. The dexterity of the artist is seen, not only in the originality of subjects, but also in his scale, aesthetics and handling of colour. His body of work is inhabited with real and mythical characters who often exchange roles making their existence more magical and imaginative. Lal Bahadur attributes a subliminal value to the sights and sounds that he experiences in his daily life and gives them a metaphorical garb to appear as transformed visions from another world, but seen from a contemporary aesthetic point of view, this practice should be seen as the artist’s innate need for standing close to Indian heritage and tradition while dealing with contemporary social issues. The artworks are playful and sunny; cheerful and enlivening. It seems that the artist extracts the sunny essence of the past pictorial traditions of India and fills in his palette with pleasant and warm colours.