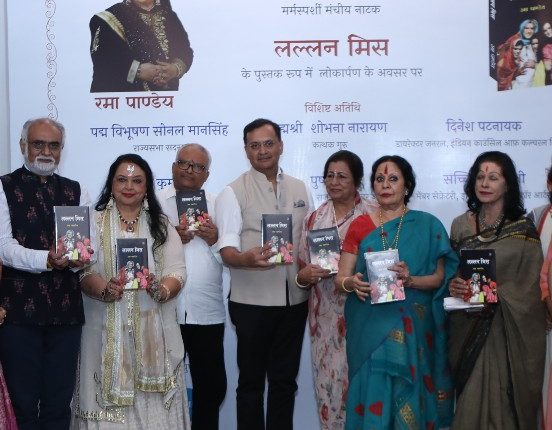 • I would like to give maximum amount for Lallan's school from 2.5 crores of MP funds: Sonal Mansingh • Rajkumari is a transgender who fought for education of children • Lallan Miss challenges society's discrimination and stereotypes

New Delhi: Directed by producer, director and writer Rama Pandey, the drama ‘Lallan Miss’ is a true story based on the story of the struggle of a transgender. The play was staged in many cities of the country and has received a lot of love and appreciation from the theatre lovers. This play is now published in book form by Vani Prakashan which was launched at Hotel Ambassador, Delhi. Renowned dancer, Rajya Sabha MP, Padma Vibhushan Sonal Mansingh; famous Kathak dancer Padma Shri Shovana Narayan; writer and senior journalist Shri Vikas Kumar Jha; Shri Dinesh Patnaik, Director General Indian Council of Cultural Relations; and Shri Sachidanand Joshi, Member Secretary Indira Gandhi National Center for Arts, were present at the book launch.

Lallan Miss is based on the real-life story of a transgender who breaks down the walls of social prejudice and builds a school for slum children so that they can have a better future. 44 year old Rajkumari, also known as Lallan Hijra built this school in Patna. Despite threats from the land mafia, Rajkumari still wanted to run the school. After 15 years of running the school, Lallan started receiving threats from the land mafia to get the school vacated and later the school was burnt down by the land mafia. Despite this, Lallan tries to rebuild the school with other active partners in the area.

Rajya Sabha MP, Padma Vibhushan Sonal Mansingh, who was present as the chief guest at the book launch, said, “Every human being is equal, and transgenders have been given respect and importance in our ancient Puranas also. We have to give the same respect and rights to them in this era as well which they are entitled to. She further said that she will try to give maximum amount out of the 2.5 crore grant under the MP fund which she is entitled to for infrastructure etc for the construction of Lallan’s school.

Rama Pandey, the author of the book said, “This is the touching story based on the tangled layers of a transgender’s life. It’s a story about the pain and problems Rajkumari, a transgender goes through due to threats from politicians and land mafia.

Writer and senior journalist Vikas Kumar Jha, who came from Patna, said, “Literature which serves everyone’s interest – one of my two-page literature published 20 years ago has been immortalized by Rama Pandey in the form of a play, and now it is also Published in form of a book, which is a matter of great pleasure for me.”

Famous Kathak dancer Padmashri Shovana Narayan said, “The way Rama Pandey portrayed the pain and sorrow that is in the lives of transgenders is very commendable”.

Dinesh Patnaik ,Director General Indian Council of Cultural Relations said, “The humour presented in the play is excellent. It is very sad to see transgenders being discriminated and it was even more sad that our judiciary took so much time to get them justice”.

Sachidanand Joshi, Member Secretary Indira Gandhi National Center for Arts said, “The transgenders also have their own society. There is shortcoming in everyone, we also have our shortcomings, we should look at the transgenders with respect. Rama Pandey has done an extraordinary work, which is an act of great courage”.

Aditi Maheshwari of Vani Prakashan said “It was a pleasant experience to have the play in the form of a book. Through it our future generations will be able to know about this story”.

University of Helsinki: New avenues opening up in the educational sciences for…

iednewsdesk May 16, 2022
University Researcher and Docent Hanna Posti-Ahokas works in the Global Innovation Network for Teaching and…