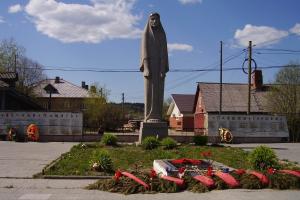 Landscaping project in the village of Khelyulya

Petrozavodsk State University contributes to the perpetuation of the memory of citizens who died in the line of military duty during the Great Patriotic War, fostering patriotism in the younger generation, combining the efforts of the executive and legislative bodies of state power of the Republic of Karelia, representatives of business, public, veteran and military-patriotic organizations with the purpose of preserving objects of historical and cultural heritage,

Resolution of the Council of Ministers of the Karelian Autonomous Soviet Socialist Republic (p. 34) No. 199 dated 04/21/1971 “A mass grave in the settlement of Khelyulya is considered an object put under state protection.”

By the decree of the Council of Ministers of the KASSR of April 20, 1987 No. 149, the memorial “Grieving Mother” to the fallen soldiers of 1941−1945 in the village. Khelyulya becomes the cultural heritage of the Republic of Karelia.

The mass grave contains 366 Soviet soldiers who died during the Great Patriotic War. Basically, the burial is associated with 45-day defensive battles for Sortavala of the 168th division, the 367th rifle and 453rd artillery regiments of the 71st division and the 3rd border detachment against superior enemy forces in July-August 1941.

A group of Soviet prisoners of war who died in 1942−1943 are also buried in the grave. in the Sortavala concentration camp number 14, and servicemen of the 7th army, corporal P.P. Kozlov (310th division) and private V.A. Shutnikov (150th fortified area), who died at the end of 1944

Results of the virtual quiz “Do you know the history of France?”