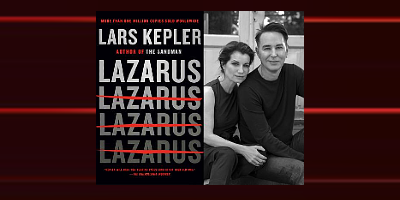 Lars Kepler, the pseudonym of the critically acclaimed, bestselling husband-and-wife team of Alexandra Coelho Ahndoril and Alexander Ahndoril, have released a new novel, just out from Knopf. “LAZARUS is the climax of our story about the worst serial killer in northern Europe,” the authors share. “From our debut The Hypnotist, Jurek Walter is the only person who scares Joona Linna. But since he’s dead now, maybe Joona should fear fear itself instead. That´s what everyone tells him, but the sudden feeling of Jurek’s presence won’t let go. We know the feeling … Jurek Walter actually got into our nightmares when we wrote LAZARUS.”

A preview of the book’s plot: Highly skilled crime investigator Joona Linna is unmatched when it comes to tracking down some of Sweden’s most dangerous killers. He understands the people who commit crimes, sees their fear and suffering, and perceives their desperate choices. He’s solved more complicated murder cases than any other police officer in Scandinavia. Saga Bauer, operational superintendent at the Swedish Security Service, has overcome personal tragedy, sexism, low expectations, and high standards alike to become a successful and respected member of the Swedish police force. She’s worked numerous cases with Joona and, despite the horrors they’ve faced, she’s rarely deterred from finding the culprit.

Only one man has ever shaken them both to their core—a killer so cold, cunning, and cruel that his shadow still haunts them from beyond the grave. That is—if he truly is dead