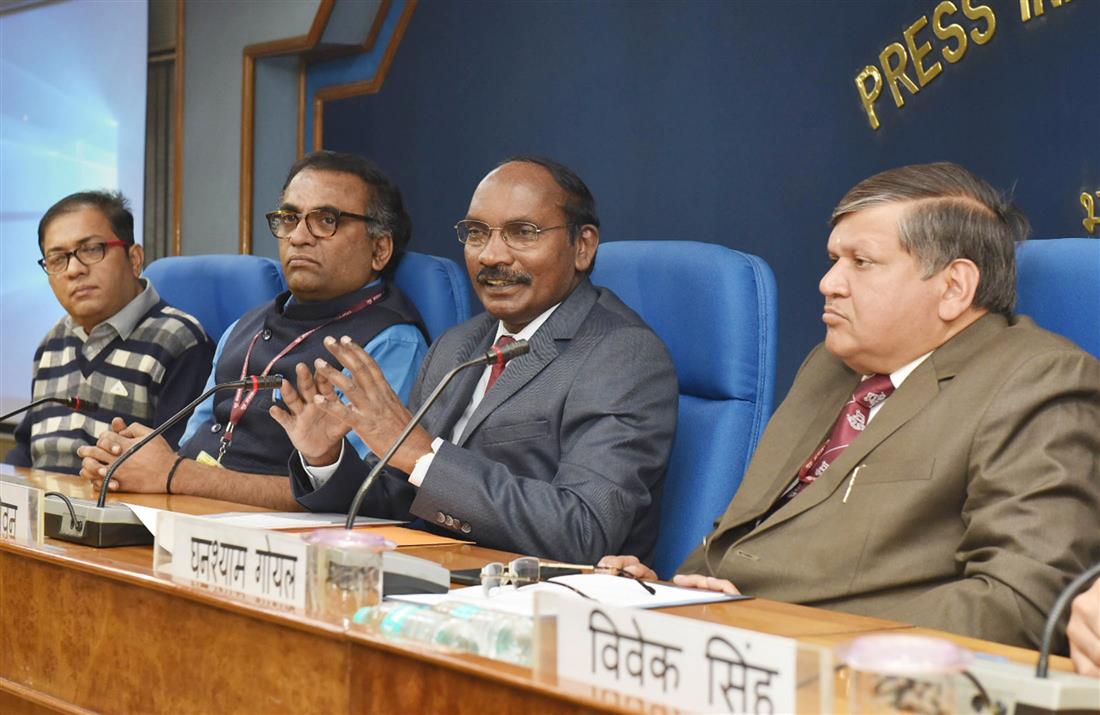 New Delhi: The launch window for Chandravaan-2 is March 25 – April 30 this year, said Chairman, Indian Space Research Organisation (ISRO), Dr K Sivan, while addressing a press conference here today. He said that ISRO has planned 32 missions this year. Elaborating on the priority areas of ISRO, the Chairman said that these include Gaganyaan project, reaching out to students, outreach programmes, planned missions of this year and Vikram Sarabhai Centenary celebrations.

Elaborating on the outreach programmes, Dr Sivan said that this year ISRO has initiated ‘Samvad with students’ programme where ISRO chairman meets the students during his outstation visits and address their queries and quench the scientific thrust. The youth have boundless energy and endless curiosity, he added.

For the first time, ISRO has announced the ‘Young Scientists Programme’ to encourage the scientific talent and increase scientific pool in the country. Under this programme, Dr Sivan said, 3 students from each state and UT will be selected for ISRO programme for one month during which they will visit ISRO centres, interact with senior scientists and will have access to Research and Development facilities. All the expenses of travelling and boarding will be borne by ISRO. Dr Sivan appealed to the state governments and the state education departments for their active cooperation in making the programme a success.

Pfizer: Pfizer and OPKO Provide Update on the Biologics…

ISRO Chairman said that six incubation centres will be established in various parts of the country – North, South, East, West, Centre and North-East. First such Centre has been established in Agartala. Dr Sivan also announced the establishment of six R&D centres. The students will be able to conduct R&D at these centres as well as incubation centres. He added that ISRO has inaugurated UNNATI programme yesterday the purpose of which is to train participants on nano satellite assembly.

Speaking on the Gaganyaan, Dr Sivan said that first unmanned space flight will be launched by December 2020, second unmanned mission by July 2021 and first manned mission by December 2021. He said that Human Space Flight Centre (HSFC) has been set up for Gaganyaan project. Elaborating on the upcoming Missions in 2019, he mentioned about Reusable Launch Vehicle Technology which will be demonstrated this year where the helicopter will take shuttle to a height and then will be dropped and will land automatically on runaway. This will help in saving the costs involved in launch vehicles, he added. He said that Small Satellite Launch Vehicle’s First flight will be in July 2019, which can carry payload upto 500 kg.

ISRO Chairman said that 9 student satellites have been launched by ISRO till date and KALAMSAT will be launched by PSLV-C44 on 24th January this year. He also spoke on other future projects including GSAT-20, RISAT and GMAT series of satellite.

The year-long Centenary Celebrations of Dr Vikram Sarabhai will commence from 12th August 2019. Various national & international events will be organised to honour the father of Indian Space prgoramme. Satish Dhawan Centre for Space Sciences was inaugurated in Jammu, he added.

For further details of press conference, kindly click on the video link http://pib.nic.in/WebcastMore.aspx?webcast_tempID=253

Pfizer: Pfizer and OPKO Provide Update on the Biologics License Application for…