In the images Lauren von Berg created, the ebb and flow of life in one of Earth’s most inhospitable places undulates across the screen. As a Princeton Environmental Institute (PEI) intern at the Scripps Institute of Oceanography, von Berg worked in sunny San Diego transforming data from autonomous robots floating in the freezing darkness of the Southern Ocean into visual stories of the tiny algae known as phytoplankton that bloom each year when the thick scarred sea ice encasing Antarctica’s Weddell Sea recedes.

Now, von Berg — who received her bachelor’s degree in computer science June 2 — is the first author of a paper in the journal Geophysical Research Letters that examines the role of Antarctic sea ice in regulating phytoplankton growth. Phytoplankton form the base of the ocean’s food chain and absorb carbon dioxide from the atmosphere through photosynthesis. 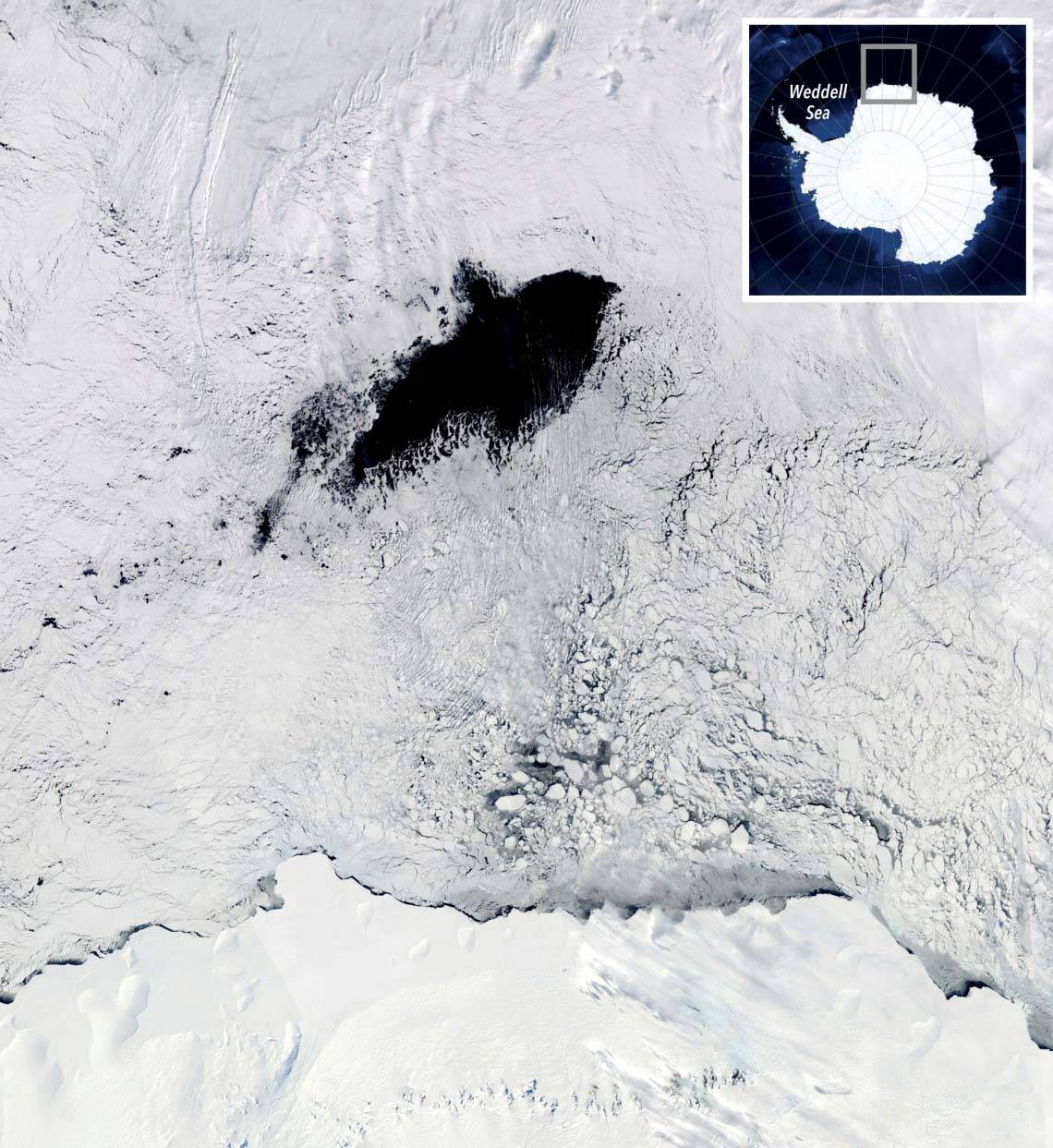 The paper was the first to use biogeochemical observations collected from massive offshore holes — known as polynyas — that form in Antarctic sea ice. A 2017 polynya (pictured) that opened over an underwater plateau known as the Maud Rise near Antarctica’s Weddell Sea resulted in an early and prolonged phytoplankton bloom that absorbed large amounts of carbon dioxide.

Von Berg and the mostly Scripps-based team found that the retreat of sea ice can significantly influence phytoplankton growth and activity, and, thus, the amount of carbon dioxide the organisms can remove from the atmosphere. Study data was collected and made available by the PEI-administered Southern Ocean Carbon and Climate Observations Modeling project (SOCCOM) based at Princeton, which is funded by the National Science Foundation and involves researchers from multiple institutions including Scripps.

The paper was the first to use biogeochemical observations collected from massive, rarely occurring offshore holes — known as polynyas — that form in Antarctic sea ice. Data from the SOCCOM floats showed that a polynya that opened over an underwater plateau known as the Maud Rise in 2017 resulted in an early and prolonged phytoplankton bloom that absorbed large amounts of carbon dioxide.

“Because there were two biogeochemical floats taking measurements at Maud Rise when the polynya occurred, there had already been research about the polynyas, but there hadn’t been research on how the polynyas affected biology,” said von Berg, who also presented the research at the Ocean Sciences Meeting in February.

“Since the research I did for this project was all coding related, my computer science knowledge helped me jump right in,” she said. “My main role was analyzing the chlorophyll signals measured by these biogeochemical floats and comparing those signals with other datasets — such as ice cover, wind and temperature — to tell a story about how phytoplankton bloom structure and timing differed between polynya years and normal years.”

While the 2017 polynya likely initiated the timing of the phytoplankton bloom, the researchers also found that circulation over the Maud Rise generally leads to higher biological productivity than surrounding areas, even without polynyas. They found that another early phytoplankton bloom far to the north of Maud Rise in 2017 was triggered by widespread early ice retreat, not a polynya.

The findings provide important insight into how the Southern Ocean contributes to the global circulation of ocean nutrients. While considered crucial for regulating the Earth’s climate, the Southern Ocean is nonetheless difficult for scientists to study, said the paper’s second author, Channing Prend, a Ph.D. candidate at Scripps and one of von Berg’s internship mentors. 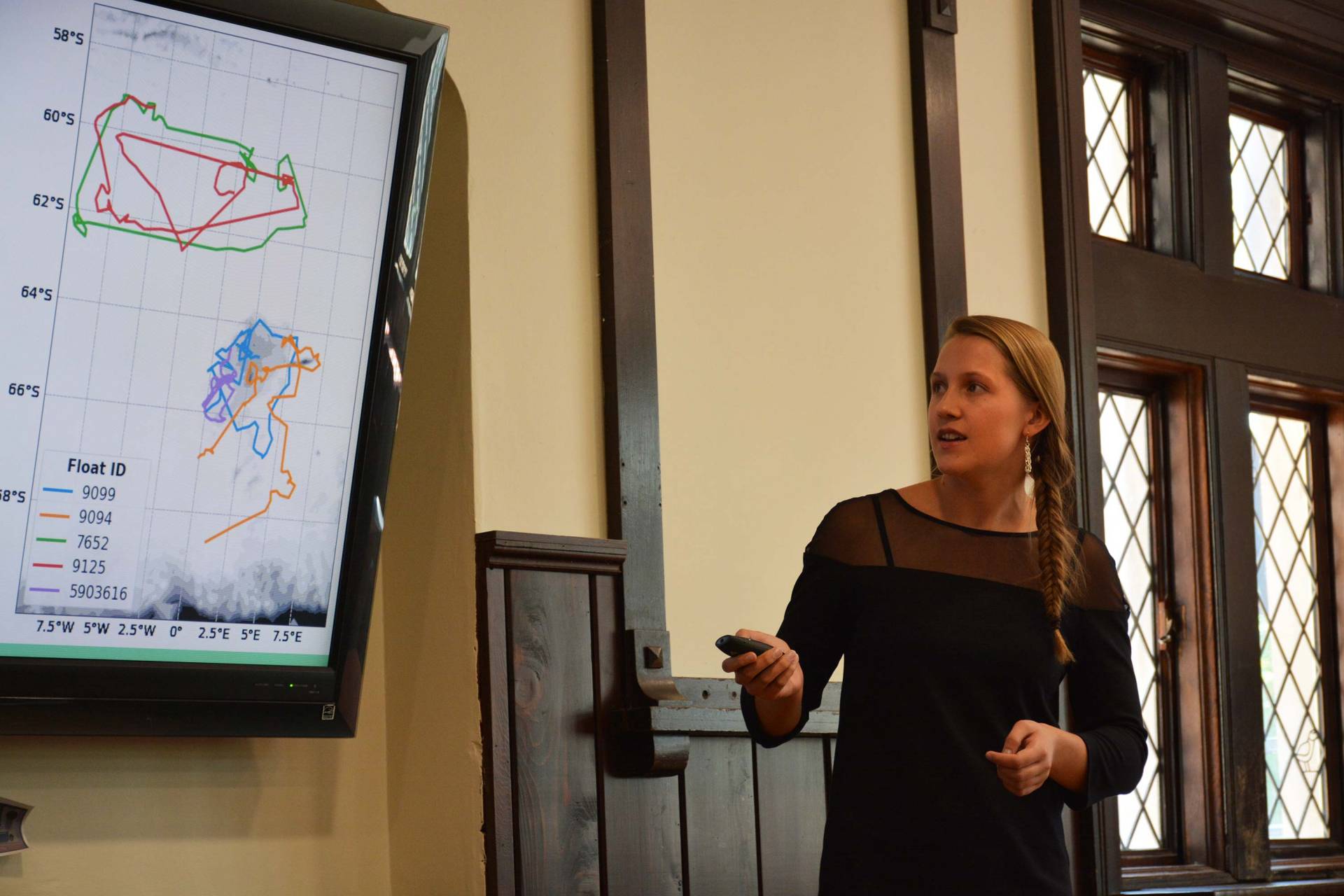 Von Berg — who received her bachelor’s degree in computer science — used her coding skills to create visualizations of data from autonomous floats deployed by the Southern Ocean Carbon and Climate Observations Modeling project (SOCCOM) administered by PEI. The findings, which von Berg presented at the PEI Summer of Learning Symposium in October, provide insight into how the Southern Ocean contributes to the global circulation of ocean nutrients.

“The Antarctic sea ice zone is a remote and inaccessible environment, so measuring the biological activity there is challenging,” he said.

“Lauren used her programming background to analyze data from the floats as well as satellites,” he said. “She wrote code to make calculations and create beautiful data visualizations, which helped us investigate the relationship between sea ice and phytoplankton blooms.”

Co-authors on the paper included Sarah Gille, professor of climate, atmospheric science and physical oceanography; associate researcher Matthew Mazloff; and Lynne Talley, Distinguished Professor of Oceanography, all from Scripps, as well as Ethan Campbell from Princeton’s Class of 2016, a Ph.D. candidate at the University of Washington and a past PEI intern.

“I was excited about this project because the actual work was largely centered around coding, but I would also get to learn about and participate in another field that I’m interested in, oceanography,” von Berg said.

“Working at Scripps was an amazing experience. All of the people I interacted with had so much passion for their work and were willing to give great advice for my own project,” she said. “My mentors especially were always there to help guide my research. It was very exciting to see my work result in a peer-reviewed paper.” 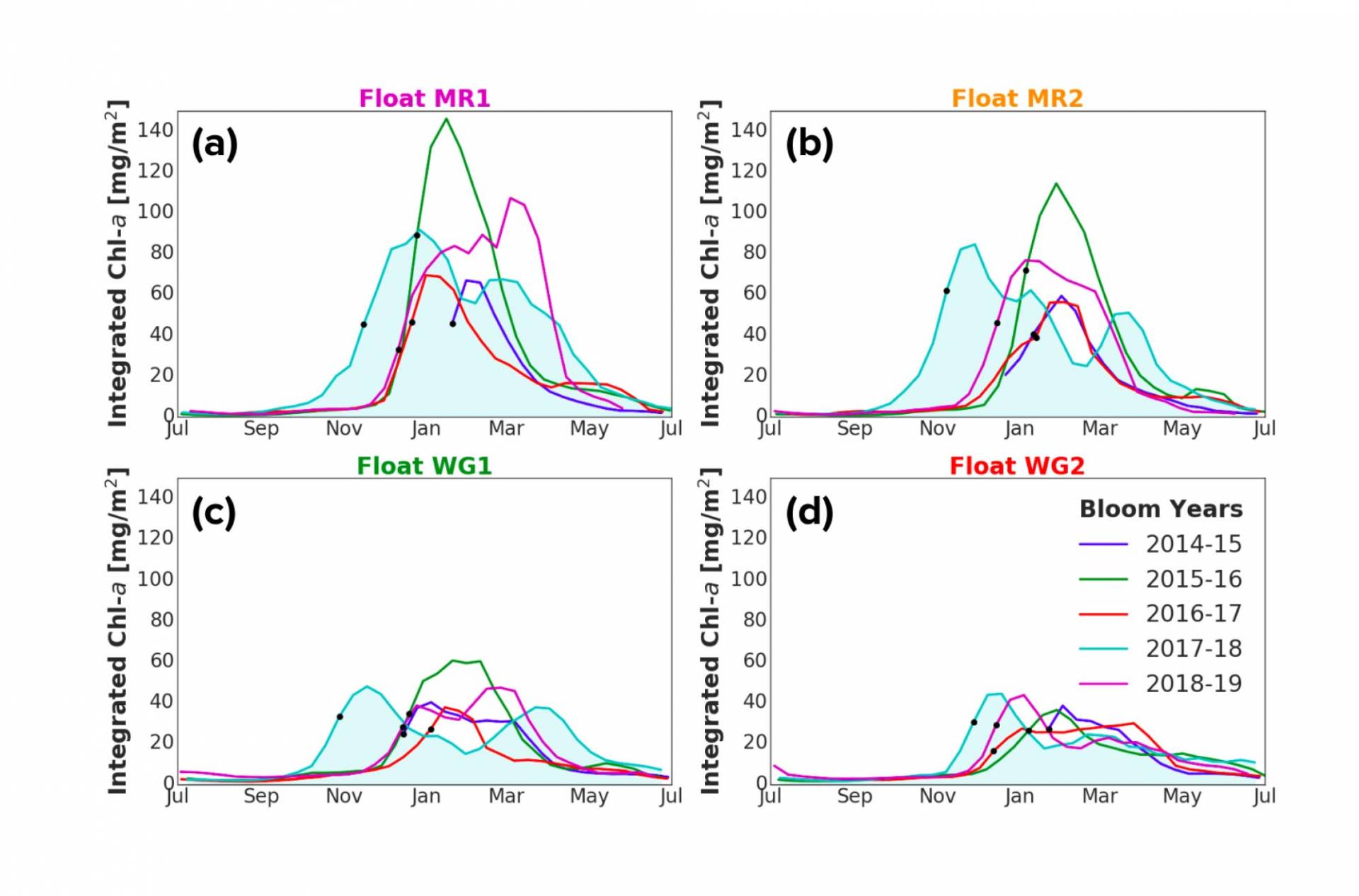 Phytoplankton form the base of the ocean’s food chain and absorb carbon dioxide from the atmosphere through photosynthesis. This image shows the extent of phytoplankton blooms during the 2014-18 Antarctic summer seasons as captured by SOCCOM floats over the Maud Rise (top panels) and just north of the rise (bottom panels). The black dots mark the peak bloom for each cycle and the cyan shading indicates the time period of the 2017 polynya. The researchers found that circulation over the Maud Rise generally leads to higher biological productivity.