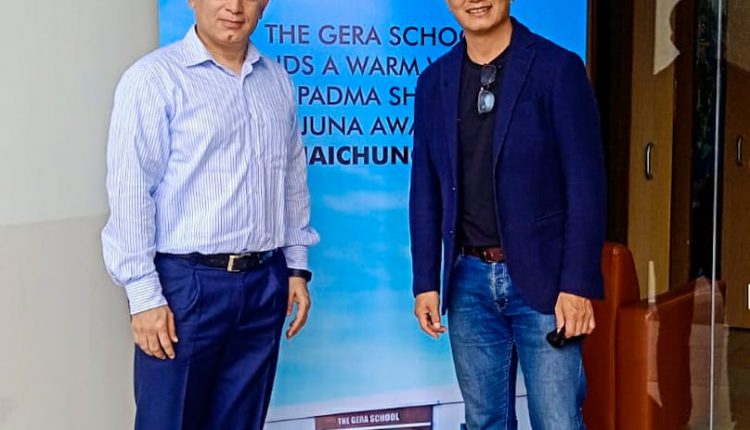 Panaji : The Gera School (TGS), one of the most prestigious schools in Goa, recognized by the nationally and internationally accepted Cambridge Board, welcomed former Indian Football Captain Baichung Bhutia on Sunday, 24th October to address the students of Goa’s best-known School with an International curriculum, The Gera School.

Speaking with the students of The Gera School, Baichung Bhutia said, “the youngsters should be honest with themselves, love their game, and not look for an easy way to achieve success. There were several occasions where I failed or lost, but sports taught me to get back on my feet again and remember that there is another day to fight, another match to win. There will be tough challenges along the way, but hold the heart and be passionate”. He explained that the key to success in anything was our passion for it and then put into it. Other factors, e.g., health, time management, etc., were important, but success could not achieve without passion as a driving force.

When asked about parents and children being in the dilemma of making a child focus on studies or the sport that the child likes very much, Mr. Baichung Bhutia’s sound advice was to take an honest reckoning of not just talent and interest but also progress. He advised students to dream big and try to be in the State or National team. However, as a wonderfully sobering bit of advice, he said that if, by the time a student in his teens had not played for the State / a good Club, it would be advisable to focus on studies.

With the various questions posed by students, Baichung Bhutia also walked down memory lane and remembered how, during his formative years, the one true love in his growing up years was football. There were no televisions, no mobiles, nothing for him to look forward to – except football!

Addressing the students of The Gera School, Baichung Bhutia highlighted the importance of physical exercise and proper, healthy food for students. He then initiated a quick Master Class for 30 students.

Commenting on the launch of this initiative, Baichung Bhutia said, “I am delighted to be partnering with Gera’s on this new venture. The objective is not only to produce good football players but also good global citizens of the future. Through this association, Gera and I are focused on providing the very best in football training & education, as much as possible, for our children.”

Baichung Bhutia is one of India’s finest footballers and a famous coach and person even after his retirement in 2011. The impressive list of awards he has been conferred with includes the Arjuna Award, Padma Shri, and Banga Bhushan Award.