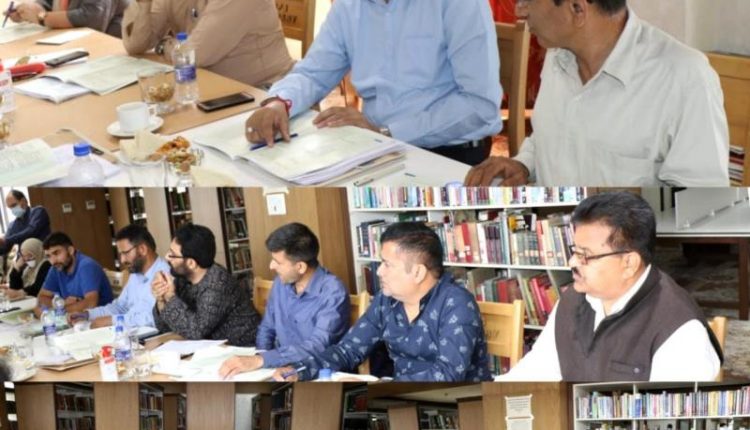 ‘Libraries-on-Wheels’ to hit the road in J&K soon

SRINAGAR : The Department of Libraries & Research and Raja Rammohun Roy Library Foundation (RRRLF), Kolkatta are jointly going to launch a novel initiative – “Library-on-Wheels” – in J&K to reach out to the readers in the remotest corners of the UT by offering free library services at their doorstep.

Making the announcement at the concluding session of the two-day meeting of the UT-Level Library Advisory-cum-Purchase Committee (UTLLACPC) here today, Director General, National Library of India (NLI) and RRRLF Kolkatta, Prof Ajay Pratap Singh said the initiative would be launched in all the Districts of J&K to make the quality reading material available in places or areas, where it is hard to find a public library.

Prof Singh said the resources for the purchase of vehicles for Mobile Libraries would be arranged from Corporate Houses and Philanthropic organizations under CSR while the recurring cost for these vehicles including fuel, maintenance and other charges would be borne by RRRLF. The books and other reading material, he said, would be provided by J&K’s Libraries Department with the District Libraries serving as the base libraries for the initiative.

He announced that on the recommendation of UTLLACPC, two public libraries from J&K including Gani Memorial Central Library, Rajouri Kadal, Srinagar and District Library Samba would be upgraded under the centrally sponsored scheme – National Mission on Libraries (NML).

The Committee approved setting up of IT Hubs at SRS Library Jammu and SPS Library Srinagar in convergence with Smart City Mission Jammu/Srinagar.

The Committee was informed that the Jammu Smart City Ltd has already formulated Rs 4.30 crore DPR for upgradation of SRS Library Jammu including setting up of IT Hub while a similar proposal is under consideration of Srinagar Smart City.

The Committee recommended that given its historic importance and rich repository of manuscripts and rare books, the Oriental Research Library, Srinagar be relocated to the upcoming Heritage Complex at Sherghari (Old Assembly Complex) where it can display the treasured collection of rare manuscripts and books. It was also recommended that the Libraries Department should approach the National Mission on Manuscripts (NMM) to get the Oriental Research Library enlisted as a Manuscript Resource Centre.

In other decisions, the Committee called for putting in place a regulatory mechanism through the Department of Libraries & Research to regulate the functioning of Private Libraries & Reading Rooms coming up in J&K.

In this regard, the Committee suggested that the Libraries Department should approach the Govt for laying down a framework for functioning of such Libraries & Reading Rooms so that the needy students and readers are not exploited.

Earlier today, Director General, NLI and RRRLF Kolkatta visited various libraries in and around Srinagar including Tehsil Library Ganderbal to take stock of the infrastructure requirement and availability of other facilities including books for the readers. He hailed the J&K’s Libraries Department for keeping its libraries open for readers, while all other public libraries across the country are closed due to COVID-19.