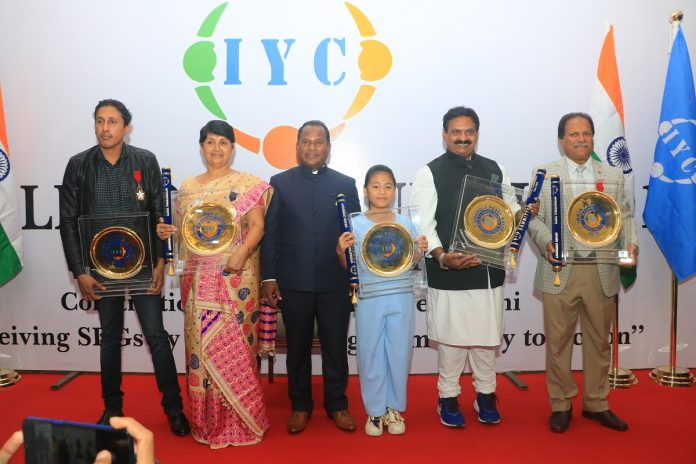 New Delhi: International Youth Committee (IYC) Conferred 7- years-old Ms. Licypriya Kangujam from Manipur, India with the prestigious “India Peace Prize 2019” on Friday in Constitution Club of India, New Delhi in recognition of her contributions to take immediate action to combat the climate change in the World amongst the 8 other Laureates. She is one of the strong young climate activist of the World recently featured by United Nations Headquarter in the UN General Assembly 2019 amongst 7 others including Greta Thunberg of Sweden in New York.

The India Peace Prize 2019 is for the exemplary leadership to promote world peace and inter-religious understanding by preventing regional conflicts or world war or environmental crisis or human rights; by settling the disputes of political, diplomatic and economic matters; or by developing new inventions to minimize threats and confusions within mankind.

The prize was handed over to Ms. Licypriya Kangujam by the President of International Youth Committee (IYC) Mr. Jayanta Patra. Event was witnessed by noted personalities including Mr. Patrick Fabre, Deputy Prime Minister of Belize, Nobel laureates, academician, MPs, senior journalists and other great personalities in an auspicious ceremony in the Constitution Club of India, New Delhi.

Licypriya said in her award speech, “Let’s redouble our efforts to put in place necessary policies and strategies to maximize the positive effects of climate action for peace. Climate Change is a global crisis.”

“I want to dedicate this award to the people of my birthplace Manipur and my country India as well as to all my fellow climate activist friends from across the globe.”, she added.

Nowadays, climate conflicts pose the greatest development challenges in the world. Children and education systems are often on the front line of these climate conflicts. The rise in violent due to water scarcity, loss of species, plants and ecosystem and natural disasters like flood, drought, etc. in many parts of the world and radicalization represent a significant threat to all of us.

“The oceans are in a state of emergency”, she warned. “Entire marine ecosystems are vanishing with the warming of the seas, and as the waste of our world empties into our waters, we face the devastating crisis of plastic pollution.”

“We are a disease that is infecting our planet.”

“The people will hold our governments and corporate powers accountable for the destruction you are allowing to our environment,” she said.

The IYC recognised annual prize is in honour of what it called ‘Mandela’s contribution to resolving conflicts and promoting race relations, human rights and reconciliation.’ A total of 3 individuals got the Mandela Peace Prize 2019, 9 got the India Peace Prize 2019 & 79 youth leaders got the National Youth Icon Award 2019.

National News January 20, 2020
0
Hyderabad: Cybersecurity Centre of Excellence- a joint initiative of DSCI and Government of Telangana is inviting applications from companies and start-ups in cybersecurity &...

CAPED becomes partner for a cause for a musical event curated by Atrangi Factory...

CAPED becomes partner for a cause for a musical event curated...