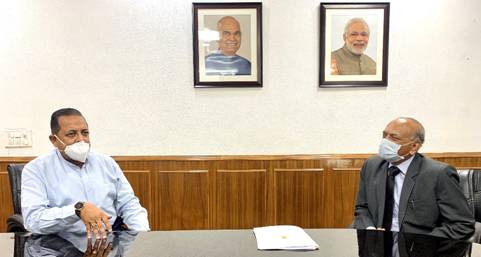 While discussing the various projects, Dr Jitendra Singh said, Prime Minister Sh Narendra Modi accorded highest priority to Ladakh and other peripheral regions. He said, it was for the first time under the Modi government that Ladakh had been granted a University, a Medical College and an Engineering College.

Dr Jitendra Singh also informed the Lieutenant Governor that the Director General of CSIR (Council of Scientific and Industrial Research) Dr.Shekhar Mande will soon meet Mathur and brief him about an exclusive plan to promote, process and do business in the famous Ladakh fruit product called “Ladakh berry”.

Shri Mathur gave Dr Jitendra Singh an update on the preparation of the policy and action plan for “Carbon Neutral” Ladakh as announced by Prime Minister Narendra Modi. He informed the Minister that the Union Territory government is earnestly working on a comprehensive plan which would be ready to be placed before the higher authorities. Mathur also gave an update about an inclusive action plan titled “Ladakh Vision 2050”.

The Lieutenant Governor also referred to 50 Crore special development package for Ladakh and said this was for the first time that any Central government had been so liberal in funding the various projects for the region. He said, this will be the first of its kind roadmap devoted exclusively to the Ladakh region. Shri Mathur thanked Dr Jitendra Singh for his continuous support and for his day to day coordination in taking up various Ladakh related matters with different Ministries at the Centre.

Wageningen University: The DNA of lettuce unravelled: in 6000 years…