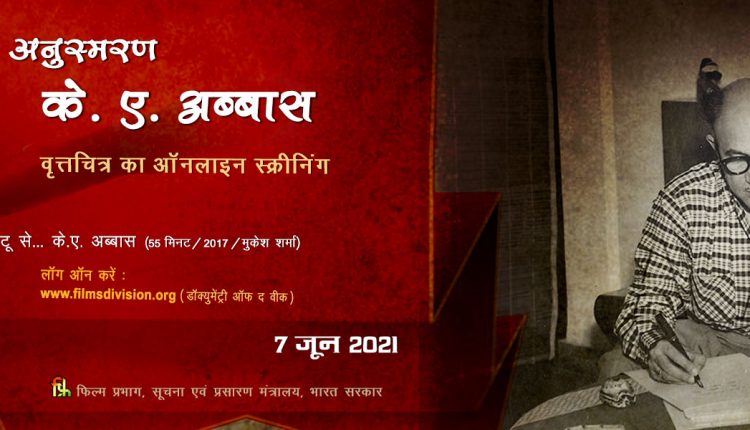 Mumbai: Films Division is remembering the acclaimed film maker-producer, screen writer, novelist, playwright, short story writer and journalist Khwaja Ahmad Abbas, popularly known as            K A Abbas, on his 107th birth anniversary by screening a biopic, I Have Something to Say…K A Abbas on 7th June 2021. The film will be streamed on Films Division Website.

Known for directing award winning social-realist films like Dharti Ke Lal, Saat Hindustani, Pardesi, Shehr aur Sapna and Do Boond Paani and also for screen-writing Jaagte Raho, Awara, Neecha Nagar, Shree 420, Mera Naam Joker and many other popular films, his films were deeply rooted in interest of common man and their concerns.  K A Abbas is also remembered for his literary works in Urdu, English and Hindi, including the best known fictional work, Inquilab. The Films Division documentary directed by Mukesh Sharma attempts to explore life and times of the veteran through creative use of archival filmic material.

I Have Something to Say…K A Abbas is being streamed on  https://filmsdivision.org/ Documentary of the Week on 7th June, 2021.

BBA vs BCom – Which one is Better?