A team of physicists from Tsinghua University and the Chinese Academy of Sciences recently used liquid metal droplets to learn more about how matters move in the quantum world. The first-of-its-kind experiment builds on a theory that claims there are “pilot waves” which guide the motion of particles.

The findings of the study have been published in a recent issue of Physical Review Fluids, a peer-reviewed scientific journal in the field of fluid dynamics.

The Chinese scientists tested the French physicist Louis de Broglie’s “pilot-wave” theory, which envisions a world of single and concrete reality. In this world, particles such as electrons move along the tracks created by physical waves. De Broglie, in the 1920s, argued that if we managed to figure out the mathematical function of the pilot wave, we would be able to calculate the particle’s trajectory and predict its future destinations.

“The droplets’ behavior in the pilot-wave system enabled us to spot particle-wave duality in plain sight,” said Dr Tang Jianbo, the lead researcher. “Our experiment has given us a better way to delve deeper into the movement of particles in the quantum world and de Broglie’s theory.” 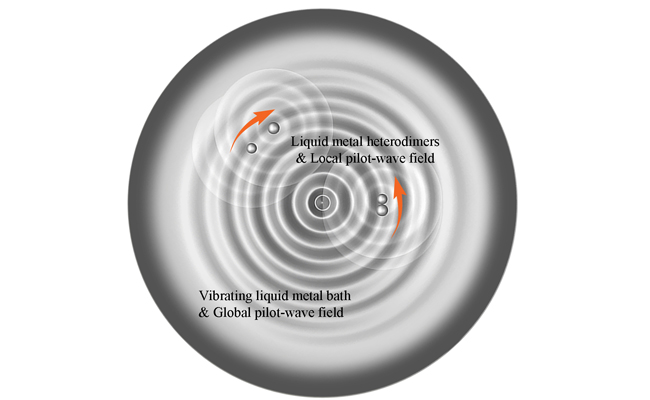 Jianbo and his team, for the experiment, put small liquid metal droplets inside a shaking bath of the same liquid metal to observe the moving behavior of droplets and found that the hydrodynamic system exhibits several quantum-like features.

Back in 2005, researchers from France were the first to use silicone oil to build a single pilot-wave system, in which the bouncing droplets were guided by their self-generated waves. A few years later, scientists from MIT carried out a similar experiment using silicone oil as well. The Chinese team chose a eutectic alloy of gallium and indium, a room-temperature liquid metal, instead. This was an upgrade from the previous experiments as the new material allowed the liquid metal system to form a dual pilot-wave field.

The team built a macroscopic hydrodynamic “quantum” system with two pilot-wave fields. One pilot-wave field, which consisted of level-split global orbits, was formed by a shaking bath, while the other was created locally by bouncing liquid metal droplets. The researchers found that two dissimilar droplets immediately started chasing each other once they met in the orbits, and the distance between the two droplets remained interlocked. Moreover, the orbit level and the interlock distance between the two droplets only took quantized values.

The experiment with liquid metal droplets can help us better understand quantum mechanics and the nature of reality. In addition, it can offer us some fresh insights into the movements of insects on a water surface, as well as the orbiting motion of electrons in atoms and of planets in the universe.