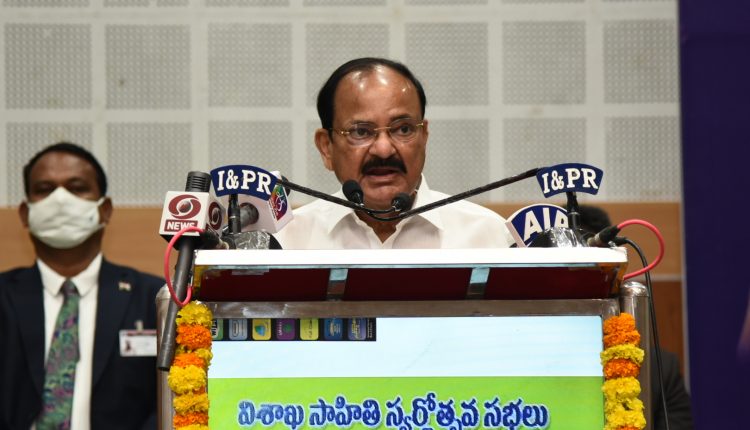 Literature and poetry that focus on societal good will remain timeless: Vice President

New Delhi: Literature and poetry that focus on societal good remain timeless and that is the reason why epics like Ramayana and Mahabharath continue to inspire even today, said Vice President, Shri M Venkaiah Naidu here today.

Speaking at the Golden Jubilee Celebrations of Visakha Sahiti, a literary organization, he observed that literature is the vehicle through which a nation’s greatness and glory are mirrored and wanted writers, poets, intellectuals and journalists to accord priority to societal good in all their writings and works.

He observed that a country’s culture and traditions play an important role in shaping literature. We will be able to protect our culture if we preserve our folk literature, he added.

Referring to the richness of Telugu language, he said that every aspect of our life, including our attire, food habits, festivals, customs and occupations are mirrored by literature.

He said that protecting and preserving Telugu and other Indian languages will enable the sustenance of our culture and provide guidance to future generations for charting the right path.

Shri Naidu expressed his happiness that primary education is being imparted in Koya language through Telugu script in 920 schools in eight districts of Andhra Pradesh. He lauded the government and officials of the education department for this initiative. He suggested that it was necessary to attain proficiency in one’s own mother tongue before learning other languages. He urged parents to take necessary initiative in this regard.

The Vice President urged writers to pay special attention to children’s literature and suggested them to find new ways to popularize such literature. He recalled the contribution of well-known writers, Mullapudi Venkataramana and Chintha Deekshithulu in this regard.