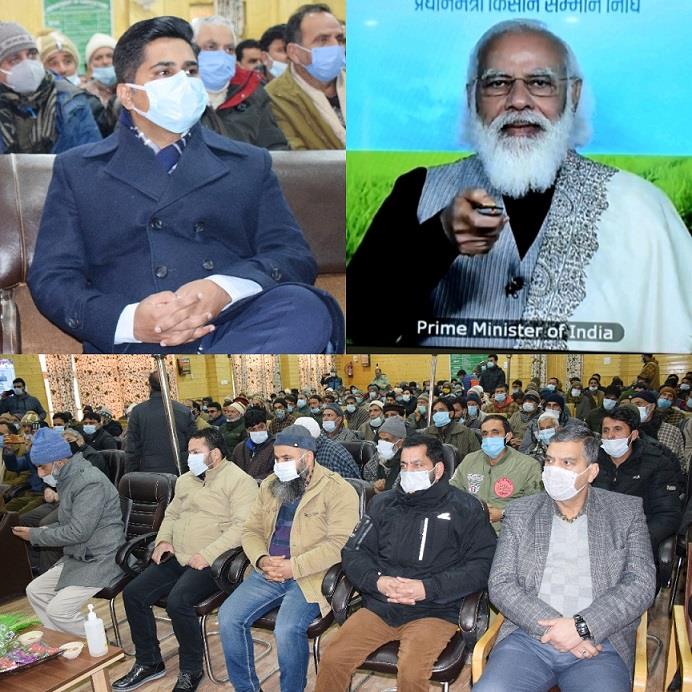 As a part of the government’s outreach program, the Prime Minister today released the installment of Rs. 18,000 crore to more than 9 crores beneficiary farmer families via video conferencing.

PM-KISAN is an initiative launched by the government in 2019 for the welfare of the farmers. Under this initiative, the government provides a financial benefit of Rs 6,000 per year and the amount is directly transferred to the bank accounts of the beneficiaries in three equal four-monthly installments of Rs 2,000 each.

AT GANDERBAL: To ensure maximum participation of the farmers in the program through virtual mode, District Administration Ganderbal today facilitated live streaming of the program at the Conference Hall Mini Secretariat.

The function was presided over by Deputy Commissioner Ganderbal, Shafqat Iqbal. During the program the DC briefed the audiences about the beneficiary oriented schemes of the central government for the welfare of farmers.

On the occasion, Chief Agriculture Officer also deliberated upon the PM-KISAN and initiatives taken by the department for revival of Agriculture sector in the district.

An amount of Rs 5.59 crore was credited into the bank accounts of 27,946 beneficiaries through DBT mode of district Ganderbal.

BDCs, Sarpanchs, beneficiaries besides several district officers and officials of the Agriculture Department were present during the program.

Meanwhile, live streaming of the event was also facilitated in other identified locations of the district.

AT BUDGAM: An impressive function was organised by District Administration and Department of Horticulture at district headquarters Budgam to facilitate live streaming of the e-release of seventh installment under PM Kissan Samman Nidhi scheme and was witnessed by a large gathering of farmers from across the district.

The function was held under the chairmanship of District Development Commissioner Budgam, Shahbaz Ahmed Mirza.

On the occasion, the DDC said that as per the statistics about 55731 farmers will be directly benefited with today’s release of installment. He said about 91000 farmers of district Budgam are eligible to receive the benefits, of these 89800 have already been registered on the PM Kissan portal.

He also said prior to today’s release farmers registered already have received Rs. 85,30,75007 and with the release of 7th instalment about Rs. 10 Crore will be credited into the accounts of the farmers through DBT mode.

Taking advantage of the farmers gathering in the function, CAO, CHO and district heads of animal husbandry and fisheries departments elaborated in detail about the benefits, programmes these departments are running in respective sections for farmers of the District.

AT PULWAMA: District Administration Pulwama today organised a programme regarding the deposition of seventh instalment by Prime Minister Narendra Modi to the farmers under PM Kissan Samman Nidhi Yojna.

The District Development Commissioner, Pulwama ,Dr Raghav Langer was the Chief Guest on the occasion.

While addressing the participants, the DDC said that agriculture is the backbone of rural economy, and it is the prerogative of the government to double farmers’ income and to make farmers self reliant and self-sufficient. He urged for safe and sustainable farm practices.

AT ANANTNAG: The Agriculture Department today organised a mega event at Dak-Bungalow Khanabal on release of the seventh installment to the beneficiary farmers under PM Kisan Samman Nidhi Yojna.

The DDC Anantnag K.K.Sidha was the Chief Guest on the occasion while CAO (Nodal officer) PM-Kisan Mohammad Iqbal Khan and other officers from agriculture and allied sectors, DDCs, BDCs, PRIs and a large number of farmers were present at the event.

On the occasion CAO informed that an amount of Rs.1,64,84,000 will be released under the PM-Kisan for 8442 beneficiaries of the district.

The officers of the department raised awareness among the farming community about various schemes of the department like Mushroom cultivation, beekeeping units, KCC & Micro Food Processing Units under implementation in the district.

AT KULGAM: The District Administration today organised a function to facilitate live streaming of e-release of seventh installment under PM-KISSAN to beneficiaries at DIET Complex Kulgam, KVK Pombay and SKUAST-K Khudwani.

The programme was presided over by the Deputy Commissioner (DC) Kulgam, Showkat Aijaz Bhat.

On the occasion, The district administration organized awareness programmes and apprised the participants about the beneficiary oriented schemes of the government for the welfare of farmers.

Meanwhile an amount of Rs,11.78 crore was credited into the bank accounts of 55391 beneficiaries through DBT mode of the district here.

AT BANDIPORA: The District Administration today organised several functions across the district on PM KISAN to facilitate the live address of Prime Minister Narendra Modi to farmers of the country.

Despite sub-zero temperature, farmers attended the functions at 12 Zones of the district covering all CD Blocks. Special arrangements were made by the District Administration to ensure people listen to the address of the Prime Minister.

On the occasion around Rs 10 crores as PM-KISAN installment was credited into the accounts of 51112 beneficiaries of different categories of farmers of the district.

The Deputy Commissioner (DC) Bandipora, Dr Owais Ahmad stressed on holding more Kisan workshops in near future for sustainable integrated farming. He urged the farmers to avail the benefit of various centrally sponsored schemes aimed at improving the socio-economic status of the farmers.