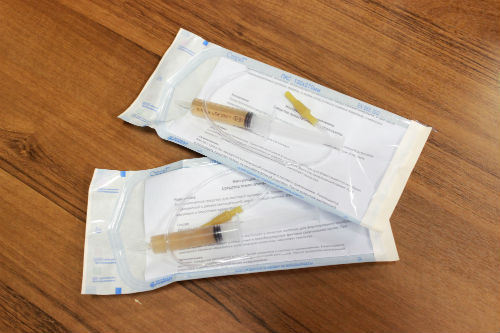 UCL: UCL startup acquired by biotechnology company in bid to…

The development of the unique agent called Tectum, which accelerates blood coagulation in a matter of seconds, is nearing completion: scientists of Lobachevsky University are planning to launch in Nizhny Novgorod the production of this unique means for stopping bleeding.
Tectum is a medical product rather than medical drug, since it has no systemic effect on the body and fulfills a local function. In other words, it is possible to stop the blood with both a clamp and with this newly developed gel. However, Tectum has a number of significant advantages over other hemostatic agents.
The substance, which was obtained by researchers almost by accident when they tested some new polymers, has proved to be a very important medication that is much in demand. Its ability to significantly accelerate the process of blood coagulation was appreciated very soon. Later, in the course of joint work with medical doctors, the chemical formula of the substance underwent major changes.
The work has resulted in a medical product that, unlike many of its competitors, does not swell to “seal” the wound, but speeds up the natural process of blood clotting. Thanks to this property of the new agent, the bleeding can be stopped very quickly, which is especially important in emergency situations.
According to Mikhail Gorshenin, one of the authors of the new drug who is the director of the Tectum Company, it took four years to develop the agent and to produce the first batch.
“Tectum can be useful to rescue workers, surgeons, ambulance medics,” Gorshenin notes. “Besides, the military also show their interest and our product has successfully passed the tests at the State Research Institute of Military Medicine.”
Now the development team is working to organize the production of Tectum. After all the permits from Roszdravnadzor and Rospotrebnadzor have been received, the drug will appear on the market. Currently, the product line includes a hemostatic gel and a nonwoven dressing impregnated with the gel.
In addition, a special hemostatic solution for the purposes of military medicine is being developed. It is also planned that Tectum will be sold in pharmacies and anyone will soon be able to buy it to have a means for stopping bleeding in emergencies. It is expected that the process of completing all necessary documentation and obtaining permits will take about a year, and after that the medical novelty will go on sale. So far, there is no exact price tag, but the developers note that it will be cheaper than other hemostatic agents.

iednewsdesk Jan 22, 2022
Estimates for 204 countries and territories confirm AMR as a global health threat, with worst impacts in low- and…