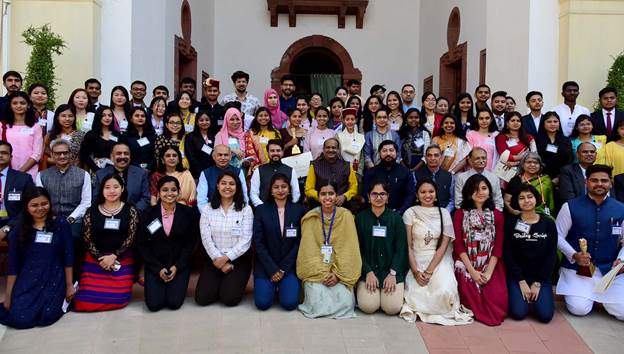 Addressing the participants, Shri Birla said that National Youth Parliament is an innovative programme to equip youth with the understanding of parliamentary procedures and democratic processes. It also encourages the youth to participate in the process of building New India, Shri Birla observed. Hailing the all-pervasive intellectual capacity and energy of the youth in India, Shri Birla hoped that India’s status as ‘Vishva Guru’ will get further impetus with their growing stature globally.

Mentioning about the rapid changes around the world, Shri Birla urged the youth to adapt to these changes so that they could prepare themselves accordingly and also take the nation forward. Shri Birla emphasized that as the country is moving forward, the youth with their talent and energy should contribute to development, democracy and strengthening of democratic institutions. The sentiment of ‘Nation First’ should guide them in their every effort, stressed Shri Birla. The Speaker also emphasized that the youth should realize their duties towards the nation and work individually as well as collectively in the direction of larger goal of making India self-reliant.

Expressing concern about the decline in dignity and decorum in legislatures, Shri Birla said that legislatures are forum for debates and discussions and not disruption. The Speaker suggested that there should be wider discussions on bills so that hopes and aspirations of all sections of society could be incorporated in the laws and the legislations effectively. Disruptions during Addresses of President and Governor are not conducive to the parliamentary tradition, said Shri Birla. Emphasizing that public representatives should work diligently to enhance dignity and decorum of the Houses, Shri Birla suggested that the youth should play an important role by way of dialogue with their representatives on this issue.

Speaking on the occasion, Minister for Youth Affairs & Sports, Shri Anurag Singh Thakur expressed the confidence that the future of Indian democracy is indeed bright since the youth are active participants in the affairs of the country, our democracy and its systems. The youth are coming forth with innovations for positive changes, which is an encouraging sign for the country’s democratic future.

Shri Anurag Thakur added that this experience is going to be the memorable moment for the participants which they will cherish throughout their life. Sharing few of his personal experiences, Shri Thakur advised the youth not to limit themselves and should bring their words into action. Shri Thakur further talked about sustainable development goals and mentioned that these topics are mostly discussed by intellectual personalities. However, he was impressed that the youth took up this topic for discussion.

Shri Thakur added that Prime Minister Shri Narendra Modi started the Clean India Campaign, because of which the face of India has changed globally. The most discussed topic by youth was Nation Building and patriotism, this is what shows, why this youth are chosen for the National Youth Parliament, Union Minister added. Shri Thakur urged the young participants to be good citizens.

Ms. Rageshwari Anjana from Bhopal won the first position, Shri Siddharth Joshi from Dungarpur, Rajasthan got the second position and Ms. Amarpreet Kaur from Bathinda received the third position in National Youth Parliament 2022 national round competition. Shri Om Birla presented awards to the winners of the third edition of National Youth Parliament Festival and conveyed his best wishes to all the participants.

The National Youth Parliament Festival (NYPF) is organised to hear the voice of the youth, who will join various careers in coming years, including public services. NYPF is based on the idea given by the Prime Minister in his Mann Ki Baat Address on 31st December, 2017. Taking inspiration from the idea, the 1st edition of NYPF was organised from 12th January to 27th February, 2019 with the theme “Be the Voice of New India and Find solutions and Contribute to Policy”. A total of 88,000 youth participated in the program.

2nd edition of NYPF was organized from 23rd December, 2020 to 12th January, 2022 with the theme “YUVAAH- Utsah Naye Bharat Ka” through virtual mode which was witnessed by more than 23 lakh youth and stakeholders across the country at District, State and National level.

3rd edition of NYPF was launched on 14th February 2022 at District level through virtual mode. More than 2.44 lakh youth across the country participated in the District Youth Parliaments followed by State Youth Parliaments through virtual mode from 23rd – 27th February, 2022. Eighty-Seven (87) winners (62 Female and 25 Male) from States/ UTs get an opportunity to be present in the Central Hall of Parliament before the Minister of Youth Affairs & Sports and Hon’ble Minister of State of Youth Affairs & Sports and other dignitaries. Twenty-Nine (29) winners of State Youth Parliament (SYP) got an opportunity to speak before the National Jury comprising of Sh. Bhartruhari Mahtab, Member of Parliament Lok Sabha, Dr. Satya Pal Singh, Member of Parliament Lok Sabha, Smt. Anu J Singh, IRS (Retd.) and Sh. Kanchan Gupta, Senior Adviser M/o Information & Broadcasting. The top three National Winners got an opportunity to speak before the Speaker, Lok Sabha during the valedictory function today. Certificates and Awards will be given to 3 final winners at the National level (Cash prizes of INR 2,00,000, INR 150,000, INR 100,000) and Rs. 50,000 for 2 consolation prizes may also be awarded, if any.