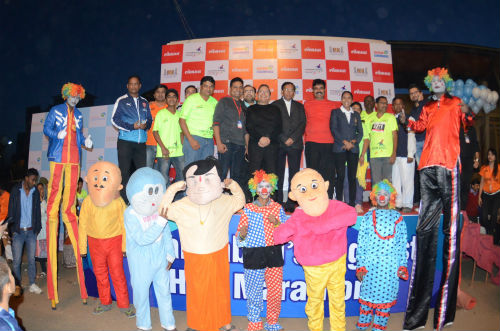 Mumbai: Lokmat, Maharashtra & Goa’s No.1 Daily, announces a Maharashtra Special Marathon – Lokmat #MahaMarathon targeting 21kms Half Marathons to be held in 4 mega cities of Maharashtra. The cities include Nashik, Kolhapur, Aurangabad and Nagpur. With latest technology and infrastructure, Lokmat #MahaMarathon will be planned, organised and executed by Taplight, Lokmat’s Experiential Marketing & Brand Solution Division who already have many 1sts to its credit. The Marathon expertise is provided by consultant YOUTOOCANRUN who have created over 15 successful Marathons in India. 1st MahaMarathon is in Nashik on October 8, 2017.
The dates include –
1. Nashik – October 8th 2017

Lokmat concluded a successful 1st edition of Lokmat Marathon at Aurangabad in 2016 with over 5000 people and a combined multimedia reach, thus making it one of the largest events involving over 3million people in the heritage city of Maharashtra. Special categories had been created for national and international runners in this Marathon.

This initiative is the brainchild of Ms Ruchira Darda, Founder Of Lokmat Marathon & Chief Learning Officer, The Yellow Door, “Marathon or running for your city is intrinsically connecting with a city’s wellbeing as not only does it invite everyone to come together and run but also integrates fitness in their daily calendar. More and more Marathoners are coming up from smaller towns with an aspiration to participate in National and International Marathons. Therefore at Lokmat, being Maharashtra’s No 1 newspaper, it was imperative to create platforms for runners from Tier 2 and 3 cities to come ahead, chase their dreams and fulfill their passion. With an overwhelming response last year in Aurangabad alone, this year we are geared up to launch a large scale Maha Marathon with a great reach.”

Organised by Taplight, Mr Aniruddha Hajare, Vice President & Business Head, says, “At Lokmat we have become the only significant bridge connecting brands with our readers in Maharashtra through unique engagement initiatives that yield response and give additional value to our partners. This Maha Marathon is an unique initiative targeted at bringing out the unfulfilled aspirations of people across Maharashtra who can participate, encourage others and create this as a practice ground for future growth. Along with great print led engagement, this Maha event will see host of on ground, online and pre event buzz created through series of partnerships thus aimed at providing immense value to all partners.”

“KSHITIJ” the flagship event of XIMAHR, the HR Association of Xavier University will be held on 18th August 2017