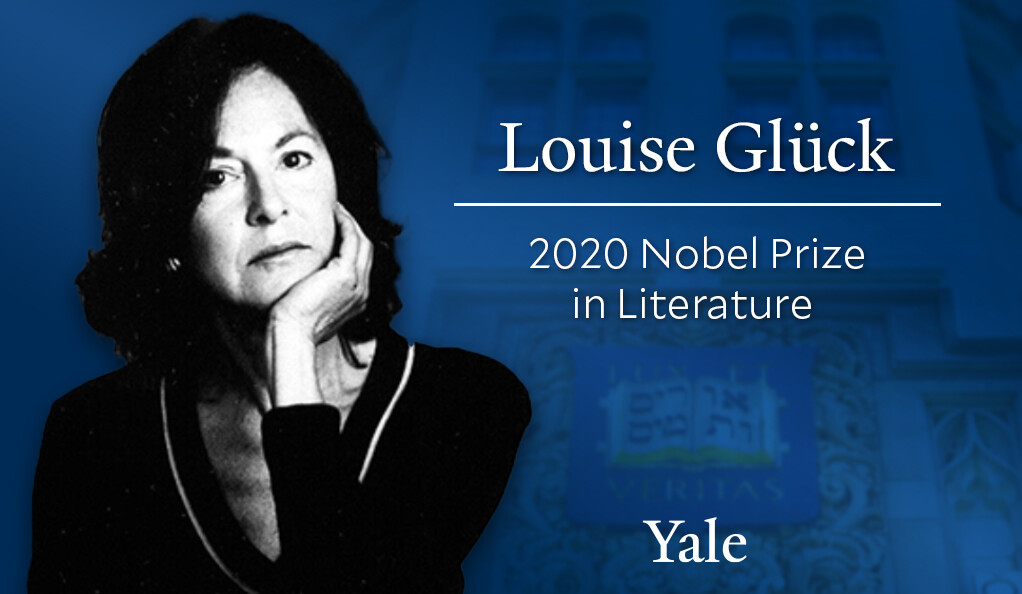 Louise Glück, an adjunct professor of English at Yale and renowned poet whose evocative voice has for decades shaped the literary landscape, on Oct. 8 received the 2020 Nobel Prize in Literature, the Royal Swedish National Academy announced.

Glück, who has taught at Yale since 2004, has published 12 collections of poetry. She won the Pulitzer Prize in 1993 for her collection “The Wild Iris” and the National Book Critics Circle Award in 1985 for “The Triumph of Achilles.”

She also received the 2001 Yale Bollingen Prize, the 2014 National Book Award for her poetry collection “Faithful and Virtuous Night,” the 2015 Gold Medal of Poetry from the American Academy of Arts and Letters, and the 2016 National Humanities Medal, one of the highest honors in American culture. She was the U.S. Poet Laureate 2003–2004.

At Yale, in addition to teaching, Glück has brought young poets to the attention of wider audiences as the judge from 2003 to 2010 of the Yale Series of Younger Poets Prize, the oldest annual literary award in the United States.

“Yale celebrates a poet of the interior life, whose unsparing explorations of the self and its place in the world in volume after volume have created poems of beauty and revelation,” said President Peter Salovey. “We also honor a galvanizing teacher, who has given herself unstintingly to students, who revere her.”

END_OF_DOCUMENT_TOKEN_TO_BE_REPLACED

Glück joins several other Nobel laureates on the Yale faculty, including William Nordhaus, who won in economics in 2018; Robert Shiller, who also won in economics, in 2013; James Rothman, who won the 2013 prize in physiology or medicine; and Sidney Altman, a professor emeritus who won in chemistry in 1989. The late Thomas Steitz won the 2009 Nobel Prize in Chemistry.

In 2004, Glück was named the Rosenkranz Writer-in-Residence at Yale College. The program brings to campus distinguished professional writers — fiction writers, playwrights, poets, critics, journalists, screenwriters, essayists, and social commentators — to enhance the university’s intellectual and artistic life with their teaching and the example of their literary accomplishments.

In the role, she has taught courses and workshops in poetry, and she meets with students formally and informally while participating in all facets of campus life. She’s also a fellow in Grace Hopper College.

Jessica Brantley, professor and chair of the Yale English Department, described Glück as an “extraordinary” poet whose powerful and precise voice has inspired and shaped the literary field. “Her work is guided by a subtle, incisive intellect that travels through loss and joy, sounding the whims and demands of the body, exploring the intensity of being alive and all that that astounding circumstance asks of us,” Brantley said. “She is also the most devoted of teachers, and the influence she has had on contemporary poetry both as mentor and as model is beyond measure.”

Lucy Silbaugh ’21, a writer and former Glück student, called the poet a remarkably skilled teacher whose devotion is evident in her workshops.

Her remarks are always discerning and exact… [they] almost feel like poems themselves because they are so striking and offhandedly brilliant.

“Her remarks are always discerning and exact,” Silbaugh said. “Sometimes her comments almost feel like poems themselves because they are so striking and offhandedly brilliant. Louise takes teaching very seriously and never, ever praises idly; if a poem is terrible, she will tell you it is terrible. But she also takes genuine delight in a good line; she seems to really want to be thrilled and surprised by her students’ work.”

Born in New York in 1943, Glück attended Sarah Lawrence College and Columbia University. She has taught poetry at numerous colleges and universities. She lives in Cambridge, Massachusetts.

The academy noted that her poems and volumes of essays on poetry “are characterized by a striving for clarity.” The themes of childhood and family life, including the relationship between parents and siblings, are common in her work.

“In her poems, the self listens for what is left of its dreams and delusions, and nobody can be harder than she in confronting the illusions of the self,” said Anders Olsson, chair of the Nobel Committee. “But even if Glück would never deny the significance of the autobiographical background, she is not to be regarded as a confessional poet.

“Glück seeks the universal, and in this she takes inspiration from myths and classical motifs, present in most of her works. The voices of Dido, Persephone, and Eurydice — the abandoned, the punished, the betrayed — are masks for a self in transformation, as personal as it is universally valid.”

A collection of Glück’s papers, including writings, notebooks, correspondence, ephemera, photographs, and artwork documenting the poet’s life, are housed in the Beinecke Rare Book & Manuscript Library. The Yale library is also home to the papers of such Nobel Prize-winning writers as Eugene O’Neill, Sinclair Lewis, Joseph Brodsky, and Czesław Miłosz.

The following is the third section of Glück’s six-part poem “October” (2002), which appeared in her 2006 collection “Averno.”

Snow had fallen. I remember
music from an open window.

Come to me, said the world.
This is not to say
it spoke in exact sentences
but that I perceived beauty in this manner.

Sunrise. A film of moisture
on each living thing. Pools of cold light
formed in the gutters.

I stood
at the doorway,
ridiculous as it now seems.

Winter was over. In the thawed dirt,
bits of green were showing.

Come to me, said the world. I was standing
in my wool coat at a kind of bright portal —
I can finally say
long ago; it gives me considerable pleasure. Beauty
the healer, the teacher —

death cannot harm me
more than you have harmed me,
my beloved life.