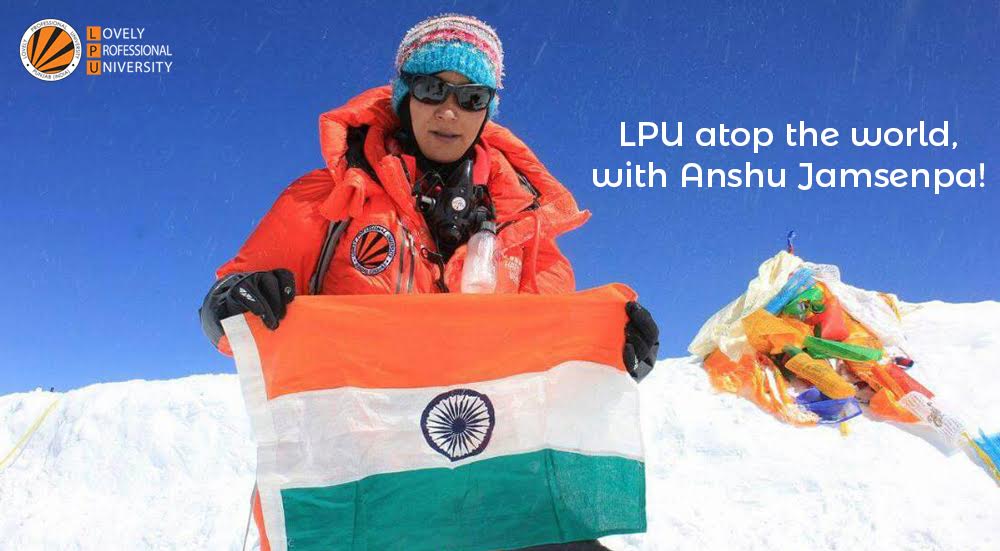 Jalandhar: Mrs Anshu Jamsenpa of Arunachal Pradesh has recently created a new history of climbing the world’s highest peak Mount Everest twice within five days. Not only India but the entire world is also celebrating this great feat of hers, and Lovely Professional University is doubly joyous as its ‘Logo’ was also atop along with on her front-wear. Rays of light on LPU ‘Logo’ symbolize dawn that dispels darkness of ignorance & ushers in knowledge through education. Entire LPU community is feeling very honoured and proud on being a great part of this historic moment, when Anshu waved ‘Tricolour’ of India for her rare achievement, while wearing LPU Logo in and on her heart. Illustrative, LPU logo reinforces LPU’s resolve to become the “Sun of Knowledge” to illuminate, energize and empower people across the globe.

In the year 2015, Mrs Anshu had visited LPU Campus to celebrate annual cultural fest ‘One India’. The theme of the fest was “Maa Tujhe Salaam” on women-empowerment to venerate women achievers of India. She was then honoured for her first ‘double ascent’ of Mt Everest in 10 days in the year 2011 and her third successful attempt two years later in 2013. Scores of other renowned women achievers of India were also invited along with her for honouring them and sharing their valour to further inspire all women-folk at LPU & around the world.

Feeling elated on the way LPU is transforming education and India, Mrs Anshu had then promised to wear LPU Logo during her next ascent on the 29,029 ft highest peak of the world. She has now fulfilled her promise, which is visibly evident to the world. She had also guided LPU women to “always follow self-discipline, self-motivation, positive attitude and social responsibility”. Mrs Anshu Jamsenpa’s husband and president of All Arunachal Pradesh Mountaineering and Adventure Sports Association, Tsering Wange had also accompanied her then.

Congratulating Mrs Anshu for a record feat and making LPU & India proud, LPU Chancellor Mr Ashok Mittal says: “This achievement of Mrs Anshu is a tribute to all the women of India who keep on contributing not only to their families but also work illustriously to write an exclusive story of their own for the world to read and follow. We are also extremely thankful to her for her generosity in favouring and preferring LPU to glow along with her on the top pinnacle of the world. I am also happy to underline through Mrs Anshu how an Indian woman performs the best, from being a simple homemaker to an eminent leader.