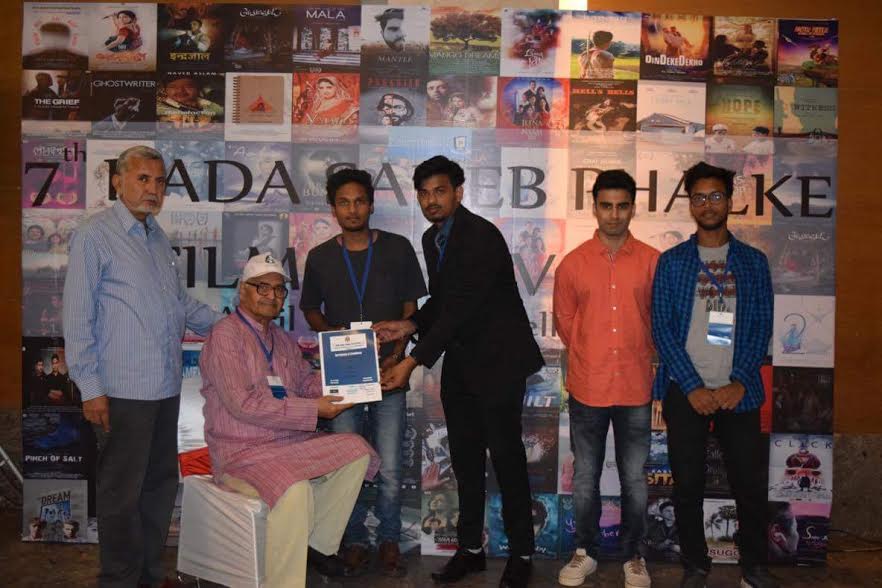 Jalandhar: Celebrating excellence in cinema, India’s most prestigious annual 7th Dada Saheb Phalke Film Festival-2017 recognized the enlightening, entertaining & progressive cinema-works of Lovely Professional University. LPU students have been honoured for their excellence in three categories -Creative Awards; Special Festival Mention; and, Special Jury Mention. LPU student’s short films ‘Mantle’, ‘Ittar’ and animation short film ‘Nostalgia’ are adjudged excellent over all other entries from across India and 50 other countries, in the students’ category. Fest’s Chief Advisor Dr DC Singh and Festival Director Mr Rambhul Singh awarded LPU students with trophies and certificates.
Award winning students are from diverse areas and departments including those of Journalism & Film Production, Mechanical Engineering, Bio Technology, ECE, Fine Arts and more. All of them belong to different and distant states of India including Andhra Pradesh, Assam, Chhattisgarh, West Bengal, Odisha, Kerala and other. Asinty Jagdish, a 7th semester student of Mechanical Engineering and who hails from Vishakhapatnam, is the director and screen play writer for award winning short film ‘ Mantle’ which preaches viewers to be great environmentalists under the slogan “ Save Tree & Save Earth”. Bio-Tech student Binoy Vergheese, from Kerala, acted as the central character as a bad-man and is shown cutting and selling wood. However, he realizes the importance of both land and trees and gets reformed. Sarthak Kumar Sahu, an ECE student at LPU from Odisha, helped Jagdish as Director of Photography; Film Production program student Anish Kashyap from Chhattisgarh helped for cinematography; and, Fine Arts & Photography student Sai Charan from Andhra Pradesh worked on camera.
Manish Vyas and Saif Baidya, who belong to film production department, are awarded for short film “ITTAR” which is about social reforms and cleanliness. Similarly, awarded under Jury Mention, Abdur Rehman and his teams’ animation film is about reminisces of earlier decades, when days used to be more jubilant and entertaining. LPU Chancellor Mr Ashok Mittal congratulated the creative teams and asked students to continue with their creative works for the brilliant career ahead. Mr Mittal also informed that many other LPU students have already been honoured for their creativity at 4th and 6th sessions of Dada Saheb Phalke Film Festival held.
Sharing excitement, one of the winner students, Asinty Jagdish shared: “I am glad that my university inspired me and other students to participate in this quality festival. It was really an honor to participate and win the prize for our creations. In fact, we all winners are overwhelmed to have such prestigious awards, which overlooked so many other creations in competition to us. No doubt, our team members hail from different parts of the country, but our creativity never knew any boundary. We worked united and hard, as per the culture of our multi-ethnic university ‘LPU’, and the fruitful result is before all.”
Illustrative, the festival celebrates the cinema & work of aspiring, young, independent & professional filmmakers. The festival is very important for Indian film industry. Film fraternity across India & globe organizes it on 30th April of each year to mark the birth anniversary of the father of Indian Cinema- Dada Saheb Phalke (Dhundiraj Govind Phalke). At present, the festival is attracting filmmakers from across India & 50 other nations across the world. The festival has sections for feature films, short films, documentaries, animations, music videos & ad films.