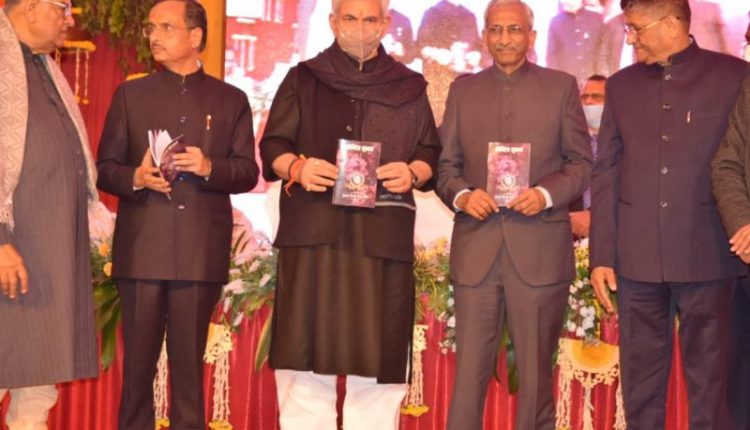 Says, language binds people together in perfect unity Ideal society is not found, it is created by the contribution of writers, thinkers, intellectuals, farmers, traders: Lt Governor

During his address, the Lt Governor paid tributes to Late Justice Prem Shankar Gupta and expressed his gratitude towards Etawah Hindi Seva Nidhi for organizing the programme in his memory.

Addressing the august gathering, the Lt Governor noted that on September 14 this year, Hindi completed 72 years as an official language. He observed that during the freedom struggle different languages played an important role and brought people together.

“As much as we are proud of Hindi, we are also proud of other regional languages because they manifest many forms of glory of Indian culture and civilization. It is this spirit of unity in diversity that made continuous efforts to empower regional languages as well as Hindi, which is spoken by around 43% of country’s population,” he said.

The Lt Governor also stressed upon the need to speed up the work of getting the literature of one language translated into another language. He said that translation can act as a bridge that will connect feelings and thoughts with two different languages.

Recalling the recent Literary Festival organized by UT government at Patnitop (J&K), the Lt Governor said that there he met many such scholars from Dogri, Punjabi, Pahari, Gojri, who have been serving regional as well as Rashtrabhasha Hindi with utmost dedication.

The Lt Governor highlighted the contributions of late Dr. Padma Sachdev, who was earlier honored by Etavah Hindi Seva Nidhi.

The Lt Governor also expressed his heartfelt gratitude to the Prime Minister Shri Narendra Modi for ensuring that school provides elementary education in the mother tongue under the new education policy.

The Lt Governor expressed his satisfaction that the literary Saraswat Samman is being organized for the last 29 years and so far 23 books have been published by the institute.