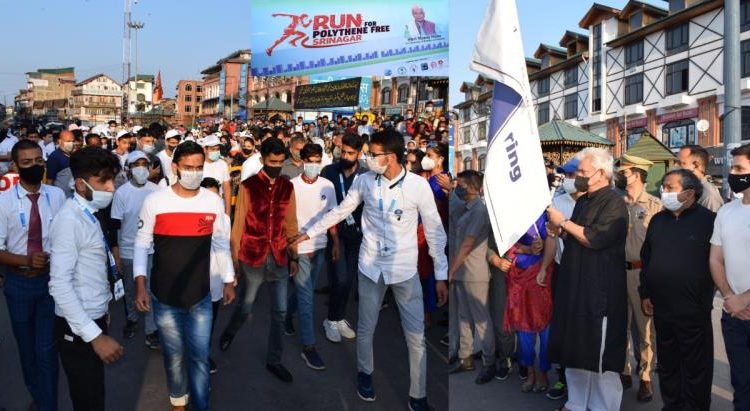 SRINAGAR : Lieutenant Governor, Manoj Sinha today flagged off Cyclothon event ‘Pedal for Dal’ from the shores of the Dal Lake in the run-up to the Independence Day celebrations.
The cyclothon witnessed the enthusiastic participation of more than 200 boys and girls from different age groups, along with professional cyclists.
Speaking on the occasion, the Lt Governor observed that the young generation has a huge responsibility to ensure peace, prosperity and unity of the nation.
A large number of youth participating in the events commemorating the historical occasion of the 75th Anniversary of Indian Independence will send a message across the world that J&K has ushered into the era of sustained peace and progress, he added.
Activities like ‘Pedal for Dal’ mark the celebrations of ‘Azadi ka Amrut Mahotsav’ and also gives hope to the entire humanity, a hope of a prosperous future while instilling the spirit of our cultural and patriotic ethos among the citizens, the Lt Governor said.
The Lt Governor called upon the youth to recognize the contributions of the great personalities who have played a major role in building a peaceful and prosperous Jammu & Kashmir and strengthen their resolve to build a New India.
On the occasion, the Lt Governor directed the officials to ensure strict adherence to Covid protocol and SoPs while organizing such events.
The event is a part of the series of programmes under Azadi Ka Amrut Mahotsav being organized by the Department of Youth, Services and Sports.
Earlier, the Lt Governor flagged off “Run for Polythene-Free Srinagar” from iconic Ghanta Ghar, Lal Chowk.
In his address, the Lt Governor observed that the path-breaking initiative is aimed at making cleaner streets, lakes, and communities to bring better environmental sustainability in the UT.
The Lt Governor laid special emphasis on encouraging the people for adopting eco-friendly practices, besides taking strict measures to curb the use of polythene.
Pertinently, the Lt Governor had already directed the JMC to conduct a 15-day long campaign ‘Plastic Free Jammu; Say No to Plastic’ to curb the use of single-use plastic.
The rally of 600 participants including students, sportspersons, and people from different walks of life passed through various areas of the city to generate awareness against the use of polythene with a prime objective to make Srinagar a polythene-free zone.
Sh. Dheeraj Gupta, Principal Secretary to the Government, H&UDD; Sh. Pandurang K. Pole, Divisional Commissioner Kashmir; Sh. Mohammad Aijaz, Deputy Commissioner, Srinagar; Sh. Athar Aamir Khan, Commissioner, Srinagar Municipal Corporation; besides Er Aijaz Hussain, DDC member; senior officers of Civil & Police Administration and large number of prominent citizens were present on the occasions.