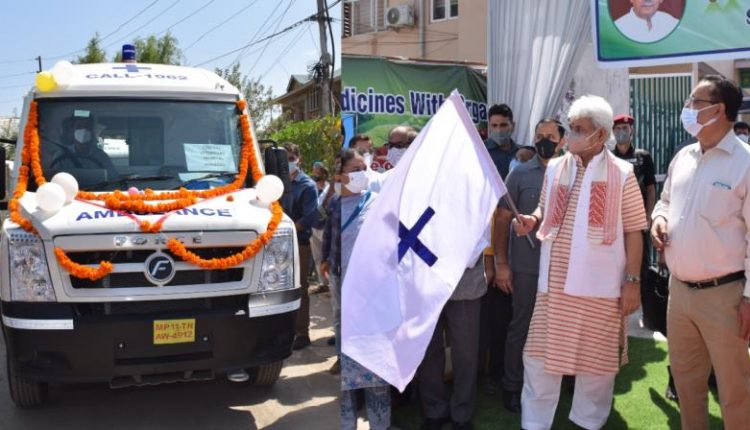 Lt Governor handed over sanction letters for 100 tractors to the farmers, 1035 threshers for Panchayats

SRINAGAR: As a part of agricultural mechanization support to the farmers for broader economic transformation, Lieutenant Governor, Manoj Sinha today handed over sanction letters for 100 tractors to the farmers and 1035 threshers for Panchayats at Agriculture Complex, Lal Mandi.

Speaking on the occasion, the Lt Governor congratulated the beneficiary farmers and Panchayat members who received sanction letters today.

Mechanization of farming is one of the important factors to transform the agriculture sector. It will further lead to sweeping changes and help farmers produce more, said the Lt Governor.

Listing the reforms introduced by the government to transform the agriculture sector, the Lt Governor observed that the agriculture department is providing facilities like cold storage, market linkages and food processing units, besides developing a strong framework for farmer-industry connect and generating employment opportunities for rural youth to bridge the urban-rural divide.

The Lt Governor advised the farmers to adopt new ways like cash crops, intercropping along with traditional agriculture for the steady increase in farm income.

Making strides in transforming the agricultural sector, the Government has set the target of providing 500 tractors to the farmers. Similarly, we had decided to provide threshers to panchayats for harvesting of paddy and maize. As many as 1147 threshers were given earlier and sanction letters for 1035 are being issued today, added the Lt Governor.

The Lt Governor underscored the interventions made by the government for the promotion of the local products. Now NAFED will sell Kashmir’s Saffron at all its outlets across the country, thereby providing another option to the farmers to sell their produce at attractive prices, he added.

Apart from Saffron, J&K is number one in the whole country in the production of Apple, Walnut and Almond, and I hope that the upcoming industries in food processing sector will help the farmer’s income to grow manifold in the coming days, said the Lt Governor.

The Lt Governor observed that the reforms brought in the agriculture and allied sector are yielding encouraging results. Online organic certification has also started in J&K to facilitate registration and ensure growth in organic farming, he said.

For the first time in history, 2000 trucks of vegetables have been exported from Jammu and Kashmir to other parts of the country. J&K has achieved top position in the entire country with a yield of 70 quintals per hectare of paddy. We are converting 60,000 hectares of Basmati agricultural land into high productivity land, the Lt Governor observed.

In the last one year, we have produced a record 5400 metric tonnes of mushroom and 22,182 quintals of honey. Kisan Credit Cards have been made available to more than 11 lakh 60 thousand farmer brothers. Today, Rs 8,000 cr worth market of apples is changing the lives of 30 lakh people connected with the sector, he added.

The Lt Governor also spoke on the remarkable progress being made in the dairy sector.

The Lt Governor asked the youth to take up agriculture and allied activities as career options. In agriculture and horticulture, there will be no shortage of finance and cooperation from the administration, he added.

He also pointed out the measures taken by the government in terms of pesticides, fertilizers, besides imparting training to the farmers. He further suggested promoting cooperative agriculture and horticulture by constituting clusters.

On the occasion, the Lt Governor launched the Website of Organic Certification Agency. With the launch of the website, the facility of registration will be available to the farmers of Jammu and Kashmir with linkage to national and international markets, he said.

Speaking on the occasion, Sh. Rajeev Rai Bhatnagar, Advisor to Lt Governor underscored the reforms brought by the Government for getting appropriate dividends for farmers and other stakeholders associated with the sector.

Sh. Navin Kumar Choudhary, Principal Secretary to the Government, Department of Agriculture Production & Farmer’s Welfare, in his address, highlighted various farm-centric initiatives that were taken by the government. He also spoke on the initiatives taken by the department to promote organic farming, besides encouraging seed production in J&K.

On extending mobile veterinary services, the Principal Secretary said that 48 such centres will be launched in the coming days.