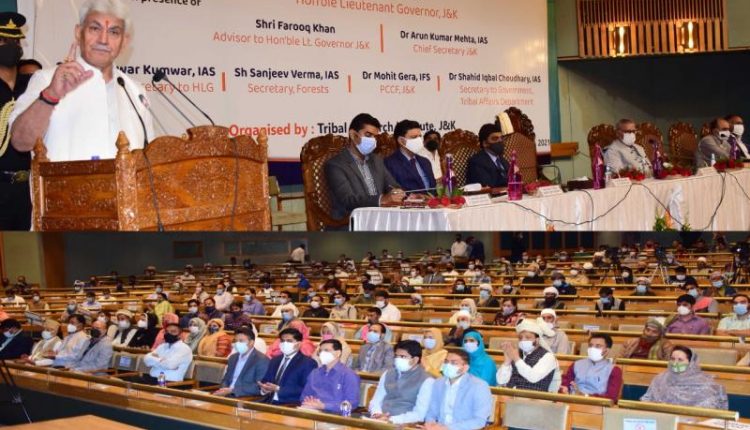 Says step will usher in a new era of empowerment & prosperity for UT’s deprived Tribal population J&K government has vigorously pursued the ideals of Hon'ble Prime Minister and with full sincerity, we are marching ahead to grant due rights to the Tribal community: LG Empowering the Tribal community through Forest Rights Act means giving them back the rights for a better life: LG Urges them to fulfill their responsibility to protect the wildlife & forests, and maintain the biodiversity · In areas where community rights are being given, Rs 10 crore will be provided immediately for infrastructure development · Work on Tribal sub-centers, Roads, Power Supply, Anganwadi Centers etc. to be started soon · Highest ever, Rs 73 crore allocated for Cluster Tribal Model Village

SRINAGAR : In a historic step that has the potential to transform the lives of members of the deprived Tribal Communities in the UT of J&K, Lieutenant Governor, Manoj Sinha today handed over individual and community rights certificates to the beneficiaries of Gujjar-Bakerwal, Gaddi-Sippi communities under the Forest Rights Act, 2006.

Speaking on the occasion, the Lt Governor termed it as a historic day for J&K and said that it was after a wait of more than 14 years, due rights have been conferred upon the Tribal community by implementing the Forest Rights Act of 2006, keeping in mind the basic spirit of social equality and harmony as guided by the Constitution of our country and the Parliament.

The Lt Governor said that under the guidance of the Hon’ble Prime Minister Shri Narendra Modi, the J&K administration has been vigorously pursuing the ideals of establishing an equitable and just social order and has been working sincerely to empower the Tribal community, which remained neglected and discriminated against for decades together.

“Empowering the tribal community through Forest Rights Act means giving them back the rights for a better life while fulfilling the primary needs of water, food, home, and livelihood. It will certainly change the condition of their lives. They will become self-reliant with access to resources for their development”, he added.

Besides implementing the constitutional rights of the tribal community, we are also working to connect J&K’s tribal population and their new generation with the mainstream of development, added the Lt Governor.

The Lt Governor, on the occasion, also recalled the formidable efforts of former PM and Bharat Ratna, Atal Bihari Vajpayee Ji for the welfare of Tribal and marginalized communities of India. He observed that Vajpayee Ji was at the forefront of this sincere initiative, besides launching campaigns calling for special recruitment drives to further empower the Tribal community.

The Lt Governor observed that a comprehensive exercise was undertaken by the officials of the UT administration immediately after the Hon’ble Prime Minister entrusted these rights to the Tribal community of Jammu and Kashmir. He noted that detailed discussions were held with all the stakeholders and special attention was given to have a firsthand assessment of the on-ground situation of Tribal population across J&K.

The Lt Governor lauded the role of the Department of Forests and Tribal Affairs for reaching out to the stakeholders in order to ensure the seamless transfer of rights to all the genuine beneficiaries.

“I want to assure that the UT administration is continuously working at different levels to protect the interests of Tribal people, including their land; full attention will be given to the maintenance of forests”, he added.

The Lt Governor noted that the members of the tribal community need to be sensitive towards their responsibility to nurture our forests and other natural resources. Rich biodiversity means a stable ecosystem, which plays a vital role in our cultural diversity and economic growth, he said.

“As we embark on this new journey, I urge my Tribal brothers and sisters in Jammu Kashmir to also fulfill their responsibility to protect the wildlife, protect the forests like a member of their family, and maintain the biodiversity”, the Lt Governor observed.

Informing that the work on Tribal Sub Centres, Roads, Power Supply, Anganwadi Centers etc. will be started soon, the Lt Governor said that in areas where community rights are being given, Rs 10 crore would be provided immediately for infrastructure development and more resources would be made available to them so that the tribal community can be empowered in true sense.

Referring to his interaction with the delegation of Gujjar-Bakerwal & Gaddi-Sippi Community, the Lt Governor said that development of Tribal communities of J&K is among the top priorities of the government for which the administration has taken various unprecedented initiatives. “This year, highest ever allocation of Rs 73 crore has been allocated for Cluster Tribal Model Village”, he added.

He mentioned about the government’s decision of developing transit accommodations at eight places at an estimated cost of Rs 28 crore, building Tribal Bhavans in Jammu, Srinagar and Rajouri, Rs 15 crore Tribal Health Plan, creation of health sub-centre for the static population, mobile medical care units for the migratory population and establishing a cluster of 15 tribal SHGs to empower the youth and women of the Tribal Community.

The Lt Governor further announced that 1500 mini sheep farms would be established for ensuring sustainable livelihood of tribal youth, 500 tribal youth will be selected for specialized skill development programmes including Commercial Pilots, Management, Robotics, etc. He said that ‘Mission Youth’ along with Tribal Department has started the process of setting up 16 Milk Villages to connect at least 2000 youth to the dairy sector at the cost of Rs 16 crore, besides providing training, branding, marketing and transport facilities to the youth.

The Lt Governor said that besides giving scholarships worth Rs 30 crore to the tribal children, 42000 additional children will be provided with the scholarship this year. “Provision of 1521 Seasonal Schools for Migratory Children, 2 Residential Schools on Migratory Route, 8,000 e-learning tablets for 7th & 8th-grade students and the salary of seasonal teachers has been increased from Rs 4,000 to Rs 10,000, he added.

The Lt Governor said that the tribal communities will be getting rights over minor forest produce. The UT government in coordination with the Tribal Cooperative Marketing Development Federation of India Limited (TRIFED) will establish infrastructure for collection, value addition, packaging, and distribution.

On the occasion, the Lt Governor also informed that the seven new hostels which were under construction for the youth of the tribal community are nearing completion and the administration has already proposed to the Union government to build 79 additional hostels. Noting that the funds for Eklavya Model Residential School at Gurez and Rajouri have been hiked to Rs 32 crore, he said a proposal has already been moved to build 5 more such model schools in the UT.

“We have also decided to build Tribal Tourist Villages and in the first phase, 15 such villages will be selected for which work will be started with an amount of Rs 3 crore. Apart from this, if any youth from the community wants to start their tourism business, the government will provide them training and easy financial assistance of up to Rs 10 lakh”, added the Lt Governor.

Sh Farooq Khan, Advisor to Lt Governor, in his address, said the government is committed to protecting and preserving the rights of the Tribal communities. He underscored the need for comprehensive measures for the development of the tribal population.

Speaking on the occasion, Dr Arun Kumar Mehta, Chief Secretary, termed the occasion as historic and called upon the members of the tribal communities to discharge their responsibilities to protect the forests.

Sh Sanjeev Verma, Commissioner/Secretary to the Government, Department of Forest, Ecology and Environment, and Dr Mohit Gera, Principal Chief Conservator of Forests & HoFF, J&K also spoke on the occasion and underlined the importance of implementing the Forest Rights Act.

They further highlighted the initiatives taken by the Forest Department for the welfare of the population depending on forests for livelihood.

Dr. Shahid Iqbal Choudhary, Administrative Secretary, Tribal Affairs Department, in his address, highlighted the positive impact the implementation of the Forest Rights Act is going to have in ensuring a dignified life to the tribal population.

Deputy Commissioners, Assistant Commissioners Panchayats and DFOs were also felicitated with Appreciation certificates on the occasion.