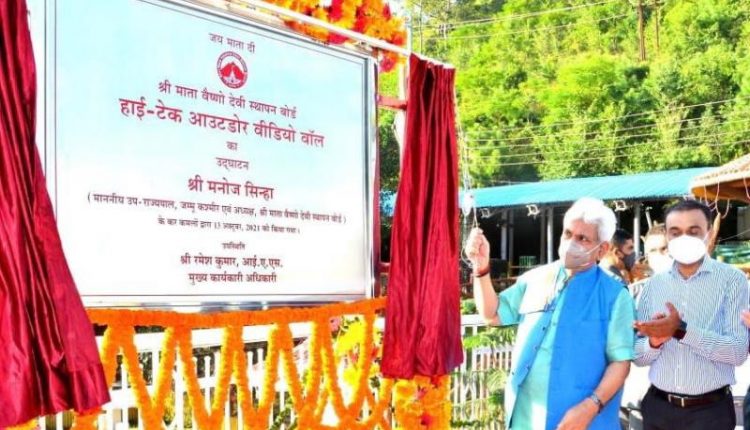 The Lt Governor also visited the holy shrine of Shri Mata Vaishno Devi Ji on the auspicious occasion of Durga Ashtami and paid obeisance at the sanctum sanctorum. He prayed for peace, harmony, and prosperity in the UT.

The Lt Governor observed that the installation of hi-tech multipurpose video walls at various locations on the track will enable dissemination of real-time information to the visiting pilgrims with regard to the yatra, and also add to the aesthetics of various locations on the track. The live telecast would be the main attraction to the pilgrims. It will also showcase the awareness about various initiatives commenced by the Shrine Board for the facilitation of the pilgrims.

The project, to be accomplished in two phases includes installation of six large outdoor video walls at prominent locations on the track in the first phase, which was inaugurated today, and 20 Indoor LED screens at major establishments of the Shrine Board during the second phase.

This project would primarily facilitate the pilgrims by way of Live Atka Arti, Mata Ki Kahani (Stage Play), and Live Darshans on their way to Bhawan. Moreover, it will also provide advisory/display features (24X7) regarding Disaster Prone Locations on the track during rainy season and otherwise, besides, providing information of missing persons or items, and early warnings of weather forecast.

The Lt Governor directed the concerned officers to devise a Standard Operating Procedure for hi-tech Multipurpose Video Walls so that the facility could be utilized efficiently.

The SMVDSB in its continuous endeavours has recently taken various initiatives for the facilitation of the pilgrims, such as Mobile Application, Home Delivery of Pooja Prasad, round-the-clock Call Centre, e-library, and construction of Durga Bhawan besides others.