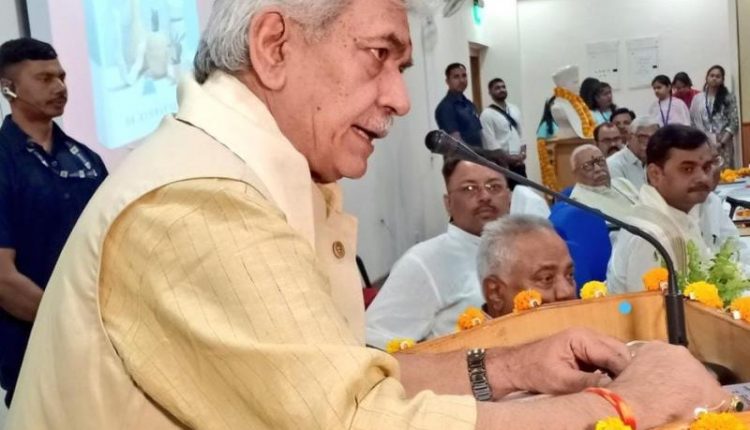 Urges scholars to further deepen the cultural, spiritual ties between Kashi & Jammu Kashmir Despite Covid Pandemic, We Have Approved Rs.52,088 Cr Investment Proposal : LG Security forces have succeeded in breaking the backbone of the eco-system of terrorism: LG LG invites saints and devotees of Kashi for Shri Amarnathji Yatra Highlights J&K’s immense transformation after August 2019 under the guidance of Hon’ble PM

Addressing the august gathering on the occasion, the Lt Governor observed that the book will act as a guide and the combined scientific research of astrology, vastu and flora will be immensely helpful in holistic living.

The Lt Governor congratulated Dr Sawhney and the Kashi Academy for the launch of the book, and said that the effort gives a vital message to the world on the significance of Vastu and plants in our lives.

While lauding the efforts of the Kashi Academy in blending traditional knowledge with modern science, the Lt Governor said, “I believe that the first condition for establishing an inclusive society is the assimilation of values and culture with technological advancement. When we are passing through the era of modernity and accelerated development, we should also keep intact the values of our ancient traditions and culture”.

The work that Kashi Academy is doing has the potential to leave a rich legacy for future generations, the Lt Governor observed.

On the occasion, the Lt Governor also highlighted the immense transformation that Jammu Kashmir is undergoing after August 2019.

He said that Hon’ble Prime Minister Shri Narendra Modi, in August 2019, unchained Jammu and Kashmir from the shackles of regressive laws that deliberately kept it away from the development. The speed with which J&K has progressed in the last one and a half years is unprecedented and unmatched, he added.

The Lt Governor underscored how for decades together, Valmiki, Gorkha, West Pakistani Refugees and tribal communities had been facing discrimination. However, today, under the guidance of Hon’ble Prime Minister, J&K is touching new heights of equitable development and growth.

He further said that under the leadership of Hon’ble Prime Minister and Hon’ble Home Minister, “we have approved investment proposals of Rs 52,088 crore in just one year – i.e from March 2021 to April 15, 2022, despite Covid pandemic, creating immense employment opportunities for our youths”.

The Lt Governor said that our security forces have succeeded in breaking the backbone of the eco-system of terrorism and a record number of tourists from across the country are coming to J&K. In the last six months, 80 lakh tourists and pilgrims visited the UT, which in itself is a testimony of changing Jammu Kashmir.

Exuding confidence in the ongoing system of proactive, development oriented governance, the Lt Governor asserted that Aatm Nirbhar Jammu Kashmir would contribute to the progress of the country. It will compete with the developed States/UTs and J&K’s development model would be replicated in other regions of the country, he added.

Along with economic development, we are also committed to the cultural development of Jammu and Kashmir. I would urge the learned people present here to work to further deepen the cultural, spiritual ties between Kashi and Jammu & Kashmir. I am sure that Kashi Academy will take this work forward with its study, research and fieldwork, the Lt Governor said.

“There is a deep connection between Kashi, the age-old city of spirituality and knowledge, the city of Baba Bholenath and the Sharda Peeth of Goddess Saraswati. Both, Kashi and Jammu Kashmir have also been the Land of spiritual salvation for Adi Shankaracharya, the great proponent of the philosophy of Advaita Vedanta, the Lt Governor added.

On the occasion, the Lt Governor also extended invitation to the Sant samaj, Seers and devotees for the upcoming Shri Amarnathji Yatra starting from June 30th. He also assured full cooperation of the UT administration to the scholars who want to contribute through research on Shri Amarnathji pilgrimage.