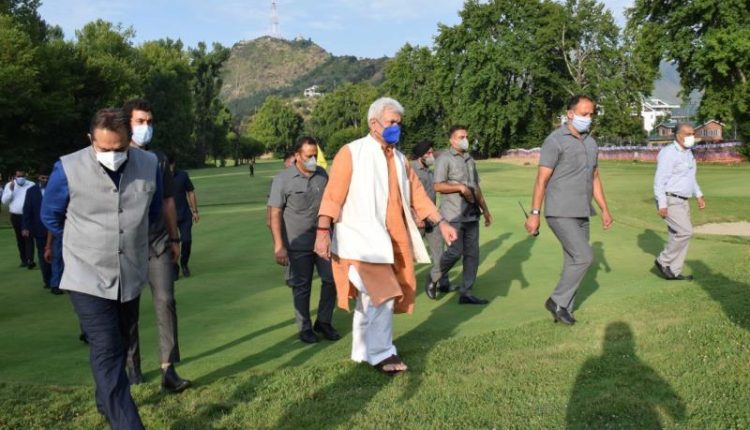 Golf academy opened to the Government school children and golf lovers; first batch to undergo 15 days training A multi-pronged strategy of developing sports infrastructure, organizing sports events across the UT, arranging the best coaches, continuously monitoring and fully utilizing the assets has been prepared: LG ; UT administration is working diligently in creating a flourishing sports culture and providing right platforms to budding sportspersons: LG At least 17 national level sports events will be held in J&K alone this year so that our youth get an opportunity to showcase their talent: LG · More than 17 lakh children will take part in different sports avenues this year · 750 talented youth are being given top-class training in Football, 1.5 lakh players are expected to participate in 3405 matches in 11 tournaments

Expressing joy on the occasion, the Lt Governor said that the restoration work of the historic Golf Course after the 2014 floods has been done in the best way while maintaining its originality.

The Lt Governor said that it is a matter of great pride that Kashmir Golf Club, one of the oldest golf clubs with rich history, is the second only in the country after the Royal Golf Club, Kolkata. With best-in-class Golf courses, J&K aspires to be the Golfing capital of the country. A similar Golf Academy with national-level training facilities will be launched in Jammu soon, he added.

Addressing the young sportspersons of the first batch of Golf Academy, the Lt Governor said that countless inspiring stories have originated from the Kashmir Golf Club and they will definitely experience them along with the nuances of the discipline during the coming 15 days of training. He informed that eminent coaches of the country will come to impart training and the first batch itself is starting with the world renowned player and coach of the Indian team Sh. Amandeep Johl.

“We have made golf accessible to the common man of the society. It is no longer the game of elite only. Dream of Inclusive society being realized”, added the Lt Governor.

The Lt Governor enunciated that the talent of the sports can’t be limited, it always comes out in one form or the other and just needs an opportunity. “With proper resources and right training, we can produce Golf champions like Jeev Milkha Singh, Arjun Atwal, Shiv Shankar Chaurasia, Aditi Ashok, Smriti Mehra, and Sharmila Nicollet in Jammu and Kashmir too”, he maintained.

The Lt Governor said that Golf is considered by people to be an elite game, but the J&K administration is trying to make it available to the common people, even to the children studying in government schools.

“Jammu and Kashmir is a powerhouse of sporting talent. The administration is working diligently in creating a flourishing sports culture and providing right platforms to budding sports talents and will provide all possible assistance and necessary infrastructure to develop the potential of young sports talents of the UT”, the Lt Governor observed.

Recalling the directions passed during the review meeting of Sports Department, the Lt Governor said that it was decided that this year more than 17 lakh children will be provided with opportunities to play in different sports disciplines. A multi-pronged strategy has been prepared, which includes developing sports infrastructure, organizing sports events in every nook and corner of the UT, arranging the best coaches, continuously monitoring and fully utilizing the assets we have. It was decided that at least 17 national level sports events would be held in J&K alone this year so that our youth get an opportunity to showcase their talent.

On the occasion, the Lt Governor underscored that the sports infrastructure in J&K is better and more modern than many other regions of the country. “All the 4290 panchayats have been linked with at least 2-3 sports activities, playfields have been made for them and alternative arrangements are being made where there is no panchayat land. During the time of Corona restrictions, virtual training was arranged for 26,000 youth in various sports by the Sports Council”, he added.

The Lt Governor said that for the all-round development of youth, the government has given Rs 513 crore in the budget this year, which is Rs 17 crore more than last year.

He informed that Suresh Raina’s academy for cricket coaching is honing the talents of youth in J&K and more than 2000 players took part in the cricket tournament organized in two districts following the Corona protocol. Whereas, to promote football, programs are being run in 10 districts of J&K and 750 talented youth are being given top-class training. In football alone, 11 tournaments are being organized in J&K this year and around 1.5 lakh players are expected to participate in 3405 matches.

The Lt Governor observed that large scale work is being done on promotion of sports in Jammu and Kashmir. The UT Administration is committed to lift the local talent to the national and international level, he added.

Emphasizing the importance of sports activities, the Lt Governor said that sports connects us, puts new energy and new life in the people.

The Lt Governor termed the Golf Academy as a symbol of spirit of unity. “Apart from the technical knowledge of that discipline, every sports discipline teaches us to always put the national interest first. The energy that sports give us is the power to connect, the power of creative action. Our youth have that talent, that energy which will be helpful in taking the country and Jammu and Kashmir forward on the path of progress”, the Lt Governor added.

The Lt Governor informed that last year more than 6 lakh youth participated in programs like Back to Village, My Town My Pride, National Youth Festival, Fit India Movement, Trekking and National Integration Day. “It is our endeavour that this year also, following the Corona protocol, maximum number of young boys and girls should participate in these programs. For this, instructions have been given for vaccination of sports persons on the priority basis”, he said.

Commending the J&K Bank for the renovation works, the Lt Governor said that it is a joyous day that Kashmir Golf Club has been reconstructed after the terrible floods of 2014 and has been opened to the Government school children and golf lovers.

Meanwhile, the Lt Governor launched the Golf Training Handbook, besides handing over the sports uniform kits to the players to mark the day.

The Lt Governor also interacted with the players and took a round of the newly laid course.

While speaking on the occasion, Sh. Baseer Ahmad Khan, Advisor to the Lt Governor termed the occasion as the land mark day for the sports sector in J&K.

Dr. Arun Kumar Mehta, Chief Secretary, in his address, has stressed upon the full utilization of sports infrastructure and resources in J&K for tapping the potential of the budding sports persons of the UT.

He informed that 50 budding Golfers (25 boys & Girls each), from the Government run schools, will be trained by the International and National level Golfers.

Amandeep Johl, one of the leading Golf coaches in India to hone the abilities of the local aspiring Golfers of J&K, besides mega Golf Tournaments to be organized in the UT, he added.

Sh. Bakshi Javid, Director, SKICC, delivered the Vote of Thanks.