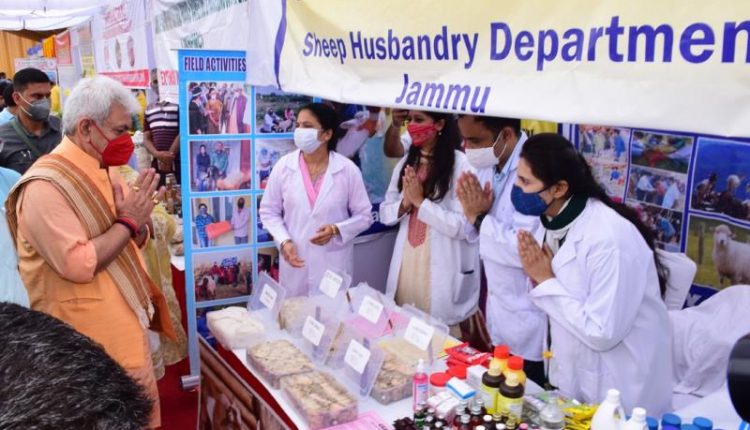 The Horticulture Week (14th – 20th July, 2021) in the UT shall focus on the broad contours of initiating massive Plantation Drives, taking objective steps in Nursery Development, promoting Mechanization among the farming community, Creation of Water Sources, Human Resource Development through training and strengthening the Post Harvest Management with the overall mission of doubling the farmers’ income in the Union Territory.

The Lt Governor observed that the government has set an unprecedented target of planting 25 lakh high-density plants this year as compared to 49,000 in the year 2019, which is a new record in the history of horticulture of Jammu division.

In addition t, another 1.20 crore plants of Aloe Vera and 42 lakh plants of strawberry shall also be planted, besides 67,500 plants of Olive will be planted in Ramban and Doda districts covering around 270 Ha, this year.

He also laid the e-foundation stone for a 100-acre Mega High Density Plantation Nursery coming up at Chakroi, RS Pura, besides launching the ‘Jammu Horticulture Mobile App’ and ‘Parvaz’, a market linkage scheme for the benefit of farmers.

Speaking on the occasion, the Lt Governor outlined various initiatives taken by the government to facilitate the farming community and extending handholding to the farmers through different government schemes with a prime objective of increasing their income so that they can lead a prosperous life.

Horticulture has now become the backbone of the economy of Jammu and Kashmir. From the state-of-the-art machinery to new plants, water supply resources for farming, training, expansion of the area of high-density plantation, many innovative measures have been taken in the past one year and many more are in the pipeline for the future deliverables aiming at growth of the farming sector, added the Lt Governor.

Laying special emphasis on promoting best practices in the horticulture sector, the Lt Governor observed that significant improvement has been registered in farm productivity and production quality in the last eleven months due to exchange of knowledge and ideas in the said sector.

The Lt Governor expressed satisfaction over the strides made in Agriculture and Horticulture to fulfill Hon’ble Prime Minister’s goal of doubling the income of farmers by 2022. In many areas of Jammu division, the farmers have already accomplished this goal ahead of time with their hard work, he added.

Speaking on J&K being amongst one of the top 5 performers in the country in the ‘One District One Product’ campaign, the Lt Governor credited the farmers of the UT and officials of the concerned departments for this achievement.

Despite the challenges of Covid pandemic, our farmers have done a wonderful job and many youths who were hesitant to foray into the sector are now doing different types of organic farming and have set an example for others by their hard work. Even in these difficult times, there was no shortage of vegetables, fruits, and milk and the gap between cities and villages has also reduced, the Lt Governor observed.

Stressing on the need to acquaint farmers with all the relevant information and latest farming techniques, the Lt Governor observed that the Central government through its 64 schemes in the field of horticulture is providing subsidies up to 50 to 100% to the farmers in different components. Department’s officials have been constantly reaching out to the farmers and making them aware of the benefits of these schemes, he added.

Underlining the importance of putting more focus on branding and marketing, the Lt Governor called for making modern farming practices an integral part of the farming sector to bring stability in the horticulture sector and work according to the latest market trends.

This will also benefit the farmers and the local population by generating employment in the food products manufactured by the rural entrepreneurs. Through branding and marketing, we will also be able to contribute to self-reliant India campaign, he added.

The Lt Governor advised the farmers and all those associated with the farming sector to do new experiments in agriculture and pay attention to diversification. He also assured the support of the administration in their endeavours. “There will be no shortage of resources or guidance for the farming community”, he added.

We have to take experiments from labs to the fields. This year for Agriculture and Horticulture sector, a budget of Rs. 2008 crore has been allocated, which is Rs. 695 crore more than last year. Now is the right time that our agricultural scientists and people involve themselves in research to explore new possibilities, in consultation with farmers, to increase the production of fruits and vegetables in the ever-changing climatic and environmental conditions, the Lt Governor asserted.

I call upon all the officers, farmers, agricultural scientists to contribute to the progress of horticulture sector. I am hopeful that in a well-planned manner, in which we have worked towards making reformative changes and introducing new innovations, J&K can become the leading region in agricultural and horticulture production in the country in coming times, said the Lt Governor.

The Lt Governor also suggested measures for the post-Covid times. “Focus on creating more than one supply chain and encourage horticulture even in semi-urban areas. The availability of workers will have to be ensured in the future and for this, a buffer will have to be prepared by the farmers and the people associated with the market, he said.

He advised the farmers to pay attention to online marketing trends to strengthen distribution chain.

The Lt Governor observed that the department has set a target of providing Pre and Post-Harvest facilities to the farmers and efforts are afoot to achieve the same.

Speaking on the suggestions received by the farmers during ‘Awaam ki Awaaz’ radio program, the Lt Governor stated that the Government is taking policy decisions keeping in mind the needs of the farming sector.

India is the second-largest producer of horticulture crops in the world and we produce about 12 percent of the total fruits and vegetables of the world. We are a leader in production but we need to increase our share in trade. I had requested the Hon’ble Prime Minister that the central government can consider specific product-based funding programs. I am sure that under his able guidance, we will definitely be able to change the agro-horticulture scenario of Jammu and Kashmir, said the Lt Governor.

The Lt Governor gave examples of farmer Vijay Kumar Verma from Udhampur, besides progressive farmers from Chatrairi Panchayat of Majalta block in Udhampur district and Nari Shakti Women Self Help Group from Kathua who have increased their income manifold through innovative ways.

He also made special mention of Insha Rasool, a resident of Budgam who is growing exotic vegetables through organic farming and also connecting other people to it.

Highlighting the major activities to be undertaken during the Horticulture Week, it was informed that specific focus is being laid on Nursery Development. High Density Plantation Nurseries are being developed in private sector for mass production and developing crop specific nurseries in public sector in Jammu Division.

700 power tillers, 180 tractors, 34 Farm Machinery Banks, 100 Tractor Driven Equipments will be provided as a part of mechanization support to the farmers this year.

Further, 9000 farmers will be trained in budding, grafting, layering etc. 1500 women will be trained regarding value addition and fruit preservation as a step to create skillful human resource.

To further facilitate farmers, 650 bore well/ponds; 08 community ponds will be created, besides 3050 units of drip Irrigation, 230 rain guns will be provided.

Under Post Harvest Management, 30 units of fruit preservation are going to be established and as many as 500 solar driers will be provided, besides special focus will be laid on Branding and GI tagging of fruits like Mango, Litchi and Walnut etc to provide better marketing opportunities to the growers.

Sh. Navin Kumar Choudhary, Principal Secretary to the Government, Department of Agriculture Production & Farmers’ welfare and Horticulture Department highlighted the initiatives taken by the Department of Agriculture Production during the last one year. He elaborated on how the farmers from Jammu division have started exporting various fruits like litchi, pear etc for the first time, after going for diversification. He also informed about the tremendous outreach of Agriculture and Horticulture departments whereunder the officials of the departments not only interact with the farmers through apps and softwares, but also visit at their doorsteps, facilitating them with requisite guidance.