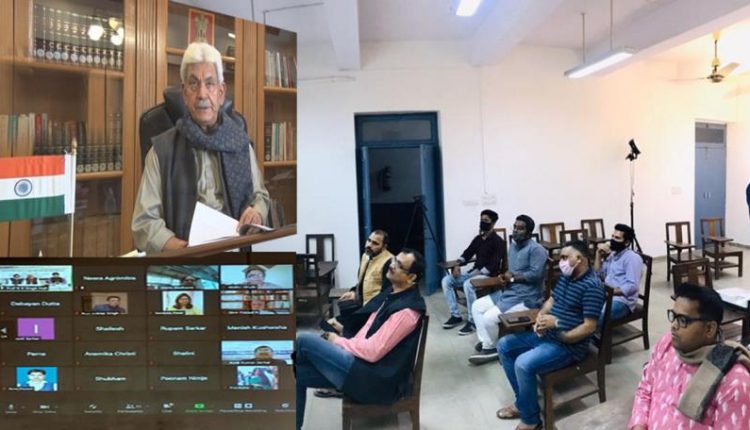 Speaking on the occasion, the Lt Governor observed that deliberations held during 8th India Social Work Congress on the theme “Social Cohesion, Collective Responsibility and Social Work Profession” will prove to be important for society and administration.

The global health crisis that we are going through today has brought families, people, groups and countries together to fight this pandemic and created a new chapter of social cohesion and collective responsibility, he added.

The concept of social cohesion and collective responsibility is the soul of our country; it is this creative movement that sowed the seeds of reformism in our country. Social work and the spirit of selfless service have been in our traditions and culture since ancient times, the Lt Governor maintained.

Terming social service as a part of life, the Lt Governor observed that through service to others, we can transform the life and society around us. Be it cleaning in Swatch Bharat Abhiyaan, becoming voice of the weak, caring for patients or supporting the marginalized groups, it all happens with the sense of service and social responsibility towards others”, the Lt Governor maintained.

Congratulating the Vice Chancellor of Visva Bharati University, and President NAPSWI, for organizing the three day-long event, the Lt Governor said that Vishwa Bharati’s motto, ‘The whole world is a house’, inspires us to understand and live the philosophy of life expounded by venerable Gurudev Rabindranath Tagore for which he performed rigorous penance and hardwork throughout his life. The tapobhoomi on which this program is being held is known for the works done for Village improvement, rural development, and the rise of our villages.

The Lt Governor called upon the professionals of all social works, to work together on literacy, health, sanitation, poverty, malnutrition, population, child labour, t women empowerment, corruption, and drug abuse and wherever policy intervention is needed.

Social service is the real prayer and worship. The more you get absorbed in serving others, the closer you come to yourself. Strive with a goal-oriented approach for balanced, inclusive and sustainable development in every corner of the country along with socio-economic progress of all individuals, said the Lt Governor while addressing the young students.

Speaking on the contribution of great social reformers, the Lt Governor said that there have been many great social reformers in our country who influenced the philosophy of welfare and development in this country. Who can forget Raja Ram Mohan Roy’s reforms, including women’s education and widow marriage. Even today, there are problems in our society, which can be faced with social cohesion and collective responsibility, added the Lt Governor.

Throwing light on the great works of Shri Rabindranath Tagore, Lt Governor said that the way Gurudev has taught for consciousness of the new generation and their deeds. Gurudev had shown the way for moral and spiritual philosophy, social problems, and necessary reforms in the society. His contribution to the rich cultural wealth of the country and with it enlightened consciousness and community development work can never be forgotten. He also did unprecedented work to solve the problems of farmers, the Lt Governor continued.

Mahatma Gandhi termed social work as a creative program, based on compassion and service. During his stay in South Africa, his work for leprosy and hygiene is being taught in many courses. He firmly believed that social change, systematic development, and establishment of complete Swaraj can be achieved through creative works only, said the Lt Governor.

Giving illustrations from Indian Mythology, the Lt Governor said that our ancient value system teaches us to work selflessly for the welfare of others. We have taught the whole world the philosophy of Vasudhaiva Kutumbakam, living together and considering that the whole of humanity is one, and service to others is the ultimate religion, added the Lt Governor.

The Lt Governor observed that in 2018, Honorable Prime Minister Shri Narendra Modi launched a portal and app named “Main Nahin, Hum” with an aim to serve the weaker sections with collective responsibility by bringing professionals from different fields on one platform.

There is a need to work with harmony and public participation on how to use our strengths, how to bring positive changes in the lives of others. In the Union Territory of Jammu and Kashmir, we have taken this public participation as a mass movement, taking education, health, and cleanliness campaigns to every panchayat and its positive results are visible, said the Lt Governor.

Many constructive programs are being undertaken by the government, be it nutrition campaign; Beti Bachao, Beti Padhao campaign; Fit India Movement, Water Conservation Campaign, or Drug-Free India Campaign. You can contribute with selfless and constructive public service by taking active participation in it, the Lt Governor said.

The Lt Governor said that our country has played a major role in countering the Corona Pandemic, and has led the entire world to fight it. “We are one of the leading countries in the management of Covid-19, we have created two vaccines not only for our own population, but we are sharing it with the whole humanity. In this way, we have discharged both individual social responsibility and global social responsibility”, the Lt Governor remarked.

The Lt Governor praised the work done by Vishwa Bharati for social service. He said that following in the footsteps of Gurudev Rabindra Nath Tagore, in 1963, Visva Bharati started the first Bachelor’s Degree in Social Work across the country, and in 1977 the Master’s degree program began. Presently, under the leadership of Prof. Ashok Kumar Sarkar, Vishwa Bharati’s Social Department is doing commendable work.

Regarding Visva-Bharati, Gurudev had rightly said that this Gurukul represents India, and that it has a wealth of ideas for everyone. Visva Bharati is a glimpse of the best culture of our country, and I am very happy that you are working for the spiritual transformation of students and awakening of the service, he added.

Concluding his valedictory address, the Lt Governor congratulated the organizing team and all participants of this conference. He hoped that the ideas emanating from this program will be shared with various stakeholders and reach the last person of the society.

Smile Foundation has been certified as a Great Place to Work®!