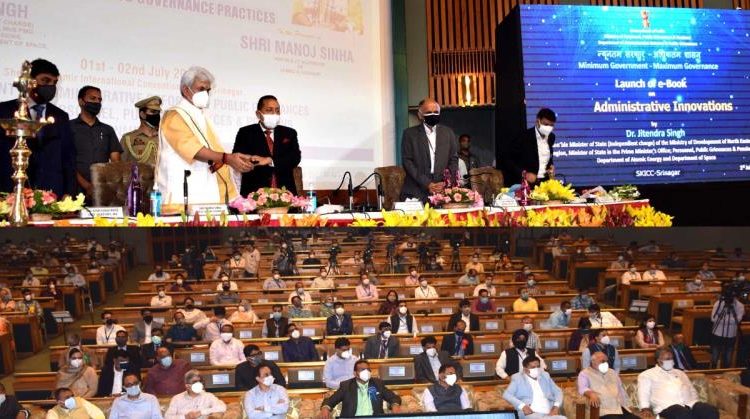 “I firmly believe that speed of decision making is critical, our efforts should be to reduce delays in implementation process”: LG Difference will be made only with Responsive, Morally Correct & Action-oriented policies, says the LG We all need to remember that behind every file, every single note, there are people. Put human touch in your working: LG to Senior officials Move away from process-based administration to performance-based administration bringing in more efficiency in the system: LG Union Government committed to Transparency & Justice for All; taking people-friendly reforms benefitting the entire country including people of J&K: Dr. Jitendra Singh · 750 officers/officials from 10 States/UTs through semi-virtual mode participating in one of the biggest ever conferences in the country · e-Book ‘Minimum Government, Maximum Governance', comprising of write-ups on select Administrative Innovations released · JK-IMPARD, NCGG exchange MoU for capacity building programme of 2,000 officers of J&K Administration · DARPG, J&K Government collaboration for developing District Governance Index patterned on National Good Governance Index

About 750 officers/officials from 10 States/UTs through semi-virtual mode are participating in one of the biggest ever conferences in the country.

“I firmly believe that speed of decision making is critical and therefore, our efforts should be to reduce delays in the implementation process, moving effectively towards building an egalitarian society. Difference will be made only with responsive, morally correct and action-oriented policies”, observed the Lt Governor.

Emphasizing on having elements of human touch in the working of the officials, the Lt Governor said that we all need to remember that behind every file, every single note, there are people. Your process cannot be mechanical; whatever you do or decide not to do in that particular moment impacts a large section of the public, the Lt Governor advised the senior officials.

The Lt Governor congratulated JK-IMPARD and National Centre for Good Governance (NCGG) for signing an MoU on the capacity building programme, giving an opportunity to 2,000 officers of J&K Administration through mid-career training program on various aspects of good governance, on the training pattern of IAS officers.

Team of J&K Administration is working in a participatory, responsive and transparent manner with moral values which is the foundation of good governance. Government institutions, schemes, various programmes, activities of social welfare, all these efforts can have their rightful impact only when the last person standing in the queue is being reached to with the benefits according to his need, the Lt Governor maintained.

Laying special emphasis on taking accountable good governance to the people, the Lt Governor said that everything has been put in public domain under JK BEAMS, EMPOWERMENT initiative, thus making J&K one of the leading States/UTs to bring such transparency in the governance process.

Good governance powered by digital intervention should aim at making government services available online, digital literacy mission reaching every village, enabling disbursement of all subsidies directly into beneficiaries’ accounts. Today, we can proudly say that a person sitting in any Panchayat of the UT can see how much the money is allocated and utilized under the plan finalized with the participation of public representatives for the development of his village, he added.

e-Office is one of the reformative steps taken by the Government to put an end to the Darbar Move practice in J&K, thus saving crores of rupees spent on transporting files in hundreds of trucks from Jammu to Srinagar and from vice-versa, observed the Lt Governor.

The Lt Governor congratulated the Chief Secretary of J&K and his team for implementing the rule of transparent accountability in Jammu and Kashmir. He also stressed on the need to lay a solid mechanism for reward for good work and punishment for laxity by the government officials.

The Lt Governor remarked that the Hon’ble Prime Minister has brought a new era in governance process through his mantra of – “Minimum Government, Maximum Governance”. On the basis of broad framework he laid for all of us and by working in different areas, we have moved forward in the direction of ‘Ek Bharat- Shreshtha Bharat’.

From the ramparts of Red Fort in 2016, Hon’ble Prime Minister had said that the country is moving from self-governance to good governance. It’s his model of Good Governance that we are able to save our economy, setting new milestones of progress, and reaching to the people with benefits of social welfare despite of Covid-19 challenges, the Lt Governor added.

The Lt Governor also spoke about Sardar Patel’s vision and his firm belief in fairness, transparency and accountability in governance for social and economic development and nation-building.

Highlighting various innovative programmes initiated by the UT Government, the Lt Governor observed that a strong foundation has been laid through programmes like Back to Village for strengthening the concept of Jan-Bhagidari by ensuring efficiency, transparency and credibility in the governmental process.

All 54 schemes of social welfare of the Central Government are being delivered at the doorsteps of the people. Responsibilities have been fixed for the officers, which is showing visible results on the ground, he added.

We are putting our dedicated efforts into making all services face-less and paper-less, besides connecting every gram panchayat with high-speed broadband, enabling financial inclusion through JAM (Jan Dhan, Aadhaar and Mobile) and ensuring mobile-based identity, said the Lt Governor.

Due to better policy and its implementation in the Sustainable Development Goals, J&K has performed well as per the SDG Index report which came out last month. Continuous efforts are being made in all the districts to make 100% electronic delivery of government services so that corruption can be curbed further. Citizens can send their complaints through JK-IGRAMS from any corner of the UT. Proper arrangements have been made for the redressal of these grievances. In this direction, LG Mulaqaat is another unique initiative, through which I directly communicate with the common people and try to resolve their grievances in the shortest possible time, the Lt Governor continued.

Terming the establishment of three-tier Panchayati Raj system as a cornerstone of participatory governance in J&K, the Lt Governor said Funds, Functions and Functionaries have made available to the ULB’s and PRI’s for the grass-root development. Historic Rs. 12,600 crore District Capex Budget has been announced, keeping in mind the needs of the common people, which is more than double the last year’s Budget of Rs 5134 crores, he maintained.

Noting the various key aspects of good governance practices are being touched during the two-day conference, the Lt Governor said it is important that the participants should be acquainted with the success stories of many reformative initiatives taken by the government. One of them is the launch of India Post Payments Bank which provided banking facilities to the villages.

The Lt Governor also spoke about the two Districts, included amongst the 115 others from the country under Aspirational District programme.

While speaking on the occasion, Union MoS, PMO, Ministry of Personnel, Public Grievances & Pensions, Dr. Jitendra Singh said that the Union Government is committed to transparency and justice for all, and the people friendly reforms taken in the last seven years have benefitted the entire country including people of Jammu and Kashmir.

Dr. Jitendra Singh brought forth the transformational changes pursued by Government through the Mission Karmayogi, wherein capacity building of 2000 civil servants in collaboration between NCGG and IMPARD will be undertaken.

The Union MoS complimented the government of J&K for efficient COVID management and congratulated the people of the UT for community management of the pandemic. He also announced the collaboration of DARPG with J&K Government for developing District Governance Index patterned on National Good Governance Index.

Sh. Sanjay Kumar Singh, Secretary, Department of Administrative Reforms and Public Grievances (DARPG), in his address, underscored the importance of providing all relevant information and services to the people through Digital Governance and Artificial Intelligence.

Dr. Arun Kumar Mehta, Chief Secretary, J&K, while speaking on the occasion, highlighted the significance of maintaining sustainability in innovation and termed it critically important for delivering good governance to the people.

Meanwhile, an e-Book titled ‘Minimum Government, Maximum Governance’ (MGMG), comprising of write-ups on select Administrative Innovations was also released by the dignitaries to mark the occasion.

The Conference is being organized by Department of Administrative Reforms and Public Grievances (DARPG) under the Ministry of Personnel, Public Grievances and Pensions in collaboration with the Government of Jammu & Kashmir.