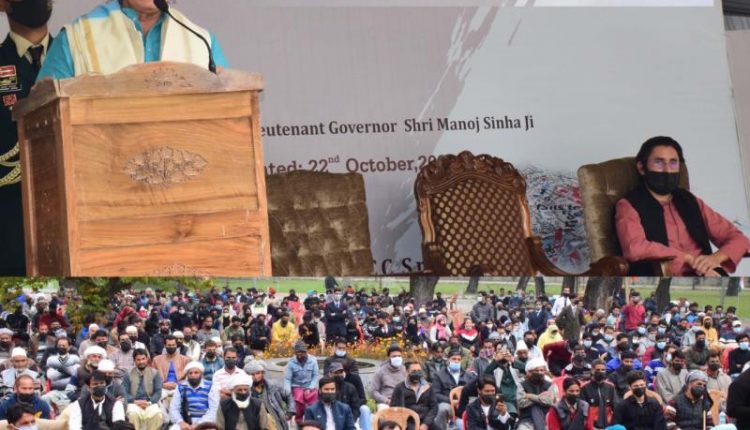 Says wound of Pakistani terror attack still fresh; October 22 will always remain a black day, not just for the people of J&K but for the entire humanity Pakistan’s atrocities against people of J&K have been exposed to the world: LG Young generation must be told about the stories of valour & sacrifice of bravehearts like Brig. Rajinder Singh, Maqbool Sherwani, Kanta Wazir & other unsung heroes: LG

SRINAGAR : Lieutenant Governor, Manoj Sinha today paid homage to all the brave soldiers and civilians who were martyred in the October 1947 terror attack by Pakistan army which disguised as Pashtun Tribals.

Speaking during a seminar on “Memories of 22 October, 1947” at SKICC, the Lt Governor said that the atrocities of Pakistan against the people of J&K have been exposed to the world.

“The wound of Pakistani terror attack is still fresh. October 22 is a reminder of Pakistan’s atrocities and will always remain a black day, not just for the people of J&K but for the entire humanity”, he noted.

The Lt Governor stressed the need to reach out to the young generation with the stories of valour and sacrifices of brave-hearts like Brig. Rajinder Singh, Maqbool Sherwani, Chief of Women’s Self Defence Corps Kanta Wazir, and other unsung heroes.

Our youth must know how Brigadier Rajinder Singh, with a handful of soldiers, fought the Pakistani tribesmen, sacrificing his life to save Kashmir and Kashmiriyat. They must be educated about Baramulla’s young man Maqbool Sherwani who resisted the Pakistani tribes and sacrificed his life and courage shown by groups of Kashmiri people to push back Pakistani militia, said the Lt Governor.

There is a need to remind the elderly and the younger generations about how Pakistan is killing our people and trying to divide us by disrupting communal harmony in Jammu & Kashmir, he added.

The Lt Governor asked the young generation to take inspiration from the sacrifice of Param Vir Chakra Awardee Major Somnath Sharma. To save innocent lives in Srinagar and Budgam, despite being heavily outnumbered, he along with his soldiers fought the Pakistani invaders and made supreme sacrifice.

The Lt Governor quoted Major Somnath’s last message- “The enemy is only 50 yards from us. We are heavily outnumbered. We are under devastating fire. I shall not withdraw an inch but will fight to the last man and the last round”.

This is the passion and love of our immortal heroes towards the motherland, protecting every inch of the land by putting their lives at stake, said the Lt Governor.

Sometimes it becomes necessary to turn the pages of history for the betterment of the present and future. As our great nation is celebrating 75th anniversary of Independence Day “Azadi ka Amrit Mahotsav”, we had decided to name institutions and roads after all such great personalities who have contributed to upholding the unity and integrity of Jammu and Kashmir, and the Lt Governor observed.

Under the guidance of Prime Minister Shri Narendra Modi, Jammu and Kashmir has embarked on the journey of progress and prosperity. We must unite to defeat the evil designs of the enemies. There will be challenges, but we will face them firmly and come out victorious, the Lt Governor added.

Prominent citizens from all walks of life, and large number of youth were present on the occasion.

We expect to be partners with Private Sector in areas of future technology development or strategic areas where we want India to create competencies like AI, Cyber Security, Semiconductors – Rajeev Chandrasekhar at CII Future Tech 2021