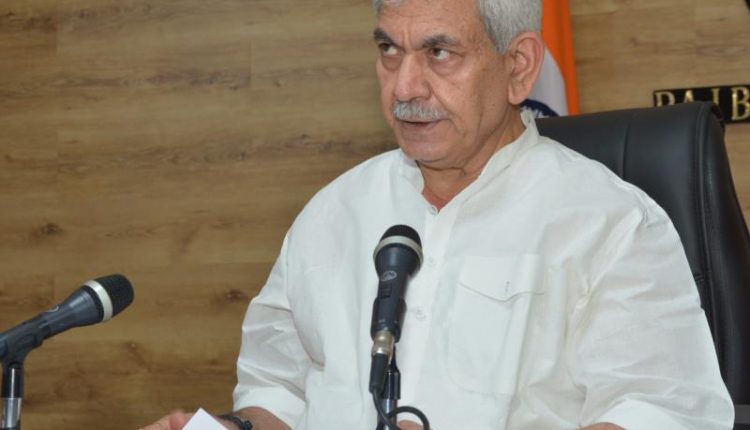 Lt Governor shares valuable suggestions, insights received from Citizens from across the UT

Pays heartfelt tributes to the martyred civilians and condolences to the bereaved families We'll hunt down terrorists, their sympathizers and avenge every drop of innocent civilian’s blood, says the LG Attempts are being made to disrupt peace and socio-economic progress of J&K and individual growth of people: LG Government remain committed to fast-paced development, will endeavor to build a prosperous and peaceful UT of J&K, says the Lt Governor · Expresses gratitude to the citizens for making valuable contributions in formulating policies reflective of their development needs & aspirations

SRINAGAR : Lieutenant Governor Manoj Sinha today connected with the people and shared the valuable insights and suggestions received from across the UT during the 7th episode of the monthly “Awaam ki Awaaz” programme.

The Lt Governor dedicated today’s programme to the civilians who lost their lives in recent terror attacks.

“I pay my heartfelt tributes to the martyred civilians and condolences to the bereaved families. We’ll hunt down terrorists, their sympathizers and avenge every drop of innocent civilian’s blood”, said the Lt Governor.

Attempts are being made to disrupt peace and socio-economic progress of J&K and individual growth of people. We remain committed to fast-paced development and will endeavor to build a prosperous and peaceful UT of J&K, observed the Lt Governor.

The Lt Governor expressed his gratitude to all the citizens for making valuable contributions that will go a long way in formulating policies that are reflective of the development needs and aspirations of the people.

Some of the suggestions received by the citizens received special mention by the Lt Governor during the programme today.

The Lt Governor welcomed the suggestion made by Shah Fozia Hussain regarding introduction of sericulture as a subject in secondary and master’s degree level and said that her valuable suggestion supplements the administration’s efforts at the revival and promotion of Silk Industry & entrepreneurship in J&K.

Referring to the suggestion made by Peer Ubaid Qureshi from Baramulla for promoting an integrated culture of 3P’s – People, Police, Policy-Makers in schools, the Lt Governor observed that such interactions are bound to inculcate a strong spirit of leadership in the next generation.

The Lt Governor mentioned Choudhary Ashraf Hussain and Hakim Singh for sharing interesting ideas for the enhancement, widening and enrichment of the nature and scope of the school education landscape.

While responding to the suggestions of Mohamad Younus Dar, Mir Sameer Fayaz from Ganderbal, Sammer Raina from BGSB University and Girish Chander Raina pertaining to strengthening the rural enterprises, setting up of incubation centres in the Universities, organizing zonal level competitions at various ladders of education system to create a strong sense of competition and a rich pool of talent in the UT, and beautification & development of historic Ranbir canal in Jammu, respectively, the Lt Governor passed directions to the concerned departments and officials in this regard, besides assuring that the valuable insights received from the citizens will be incorporated in the development policies.

The Lt Governor also made a special mention of Twin brothers- innovators- Refaz Ahmad and Ishfaq Ahmad Wani. He said that the youth with their ingenuity and innovations have become inspirations for the young generation.

To a suggestion from Dr Vishal and Gagandeep Kamra who had delved upon the need for promoting, expanding and incentivizing the solar energy installation infrastructure in Jammu and Kashmir, the Lieutenant Governor underlined the government’s commitment to the same. Direction has already been passed to the Power Department to adopt modern technology for the smooth exploitation of alternative energy, he added.

Pertinently, “Awaam ki Awaaz” initiative is in line with the government’s mission to make the governance process more inclusive, participatory and people-centric. Every third Sunday of the month, the programme is being aired on all local & primary channels of All India Radio (AIR) stations in J&K, while the telecast of the programme is being broadcast on DD Kashir.