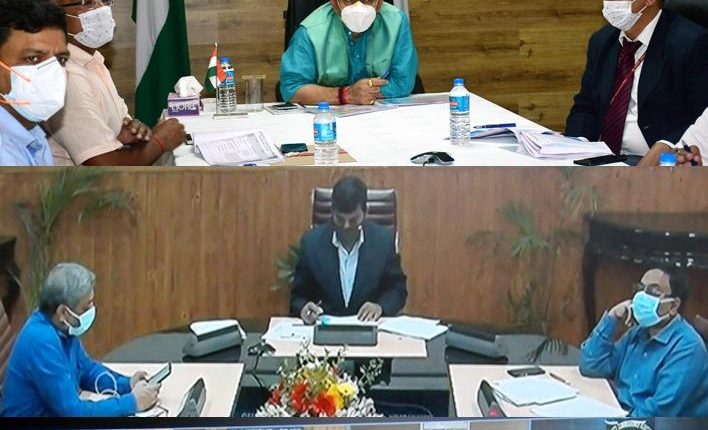 JAMMU : Lieutenant Governor, Manoj Sinha took a comprehensive review of the status of various projects being executed by the National Highways and Infrastructure Development Corporation Limited (NHIDCL), in the Union Territory of Jammu and Kashmir, at the Raj Bhavan here today.

The Lt Governor was briefed about the status, pace of works, and issues of various projects including the four-laning of Jammu-Akhnoor Road; two-laning with Paved Shoulder of Chenani-Sudhmahadev road section; Sudhmahadev-Goha Tunnel in the Jammu Division, besides the current status of Z-Morh Tunnel; Zojila Tunnel; Baramulla-Tangmarg-Gulmarg road among others in the Kashmir Division.

During the meeting, the Lt Governor directed the officials to expedite the pace of work on the major road projects. He issued directions for removal of any pending bottlenecks, besides calling for synergizing inter-agency/department coordination for achieving optimum results.

On the four-laning of Jammu-Akhnoor Road, the chair was briefed about the progress achieved under various packages of the project. It was informed that around 70 % progress has been achieved in the Canal Head to Ganesh Vihar stretch of the prestigious project, involving construction of a 4.6 km long Flyover.

The Lt Governor issued explicit directions to the concerned officials to stick to the timelines of the project. “This project is going to ease the life of thousands of our citizens. There should be no delay in the execution and the adherence of the set timelines must be ensured”, he added.

The meeting also discussed the current status of two-laning of Chenani-Sudhmahadev road section of NH-244, Sudhmahadev-Goha Tunnel, Goha–Khellani in the Jammu region. Further, a team of senior NHIDCL officials shall visit Doda next week, to resolve all pending issues related to the NH-244 project by working in synergy with district authorities.

Status of various projects being executed in the Kashmir division was also reviewed, including the Z-Morh Tunnel; Zojila Tunnel; Baramulla-Tangmarg-Gulmarg road, among others.

It was informed that the connectivity of Sonamarg highway will be ensured during the ensuing winter season and there would be effective deployment of snow cutters along all major roads that are affected due to heavy snowfall.

The Lt Governor directed the officers to undertake the technical supervision of works like earth-cutting along the highways. He observed that it is imperative to ensure the highest quality of works besides preserving the fragile ecology.