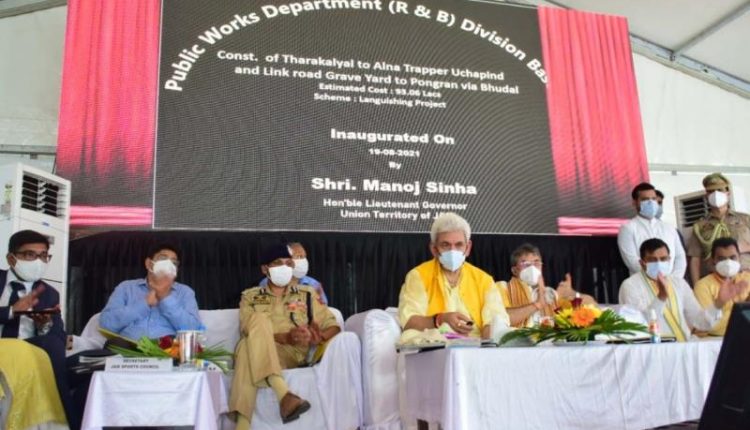 The Lt Governor also laid the e-foundation of Water Sports Centre at Ranjit Sagar Dam, to be completed at a cost of Rs 3 cr by March 2022; e-inaugurated the infrastructure of GDC Bani constructed at Rs 8.76 cr, besides developmental works of PWD, Health and Education sector worth Rs 8.39 cr and launched Divyang Sahayak- “An initiative for specially-abled persons to provide prosthetic aid”.

While speaking on the occasion, the Lt Governor observed that like Banaras, J&K has always been a great centre of Sanskrit. It is our collective responsibility to revive its glory. It is important for us to create opportunities for preservation and promotion of our civilization values, he added.

The Lt Governor further said that the inaugurations of various projects in Basohli today show the resolute commitment of the UT administration towards the economic, cultural, and social development of Basohli and adjoining areas.

“We are making efforts to revive the historical glory of Basohli and promote it as a unique destination for water sports with state-of-the-art facilities on the lines of Water Sports Centre at Srinagar, providing all necessary resources to the sports talent”, said the Lt Governor.

The Lt Governor said that the foundation stone laying of the new building of Chudamani Sanskrit Sansthan is a historic moment. Pandit Uttam Chand Pathak Shastri had done a great and noble work in promoting Sanskrit language, cultural, and heritage values.

The Lt Governor said that Sanskrit has been the only language of our country which has not only united different regions but also created a close relationship between Guru and disciples. The values of Sanskrit language were also recognized by great personalities like Albert Einstein, Oppenheimer, and Max Muller, he added.

“It should be our endeavor that Sanskrit is taught in schools according to the modern requirements. Today’s generation would like to get acquainted with wisdom in Sanskrit scriptures while dealing with the emerging challenges”, the Lt Governor said.

The Lt Governor observed that along with five official languages, the UT administration is trying to promote Sanskrit language according to the recommendations of the New Education Policy, and to establish Abhinav Gupta Institute.

Noting that the water Sports in J&K has seen significant development over the past few years, earning national and international reputation, the Lt Governor said that the Sports Centre on Ranjit Sagar Dam would provide ample opportunities to young boys and girls in various sports disciplines, besides generating employment avenues for local population.

Recalling his address to the students of NIFT, the Lt Governor said that the art and design of Basohli has shown way to the world. Government has initiated the work for GI tagging of Basohli Art, Tweed Fabric in April this year, and it will regain its glory soon.

“We must bring back its pride and rejuvenate the Basohli art”, he added.

Citing a report of the Department of Archeology, the Lt Governor said that it is the uniqueness and vitality of Basohli art that even after centuries, researchers are working on its origin and subsequent development.

Terming community participation as a priority of the UT government, the Lt Governor said that the administration is involving people in the development efforts to make it more effective and people-centric.

The on-ground presence of senior officers from various departments in Basohli also reflects our commitment to all-round development, he added.

The Lt Governor also felicitated people who are making sustained efforts for the promotion of Basohli art and Sanskrit language.

Prof Rajneesh Kumar Shukla, Vice-Chancellor, Mahatma Gandhi Antarrashtriya Hindi Vishwavidyalaya also spoke on the occasion and stressed on the need for the revival of Basohli’s identity as Vishwasthali which was once a centre of excellence for Sanskrit Learning and Indian Knowledge tradition.

The students of the Chudamani Sanskrit Sansthan presented a scintillating recitation of Sanskrit verses in connection with the upcoming Sanskrit day.

A video presentation titled “Legacy of Basohli” was also shown depicting the journey and historic context of Basohli paintings Art.