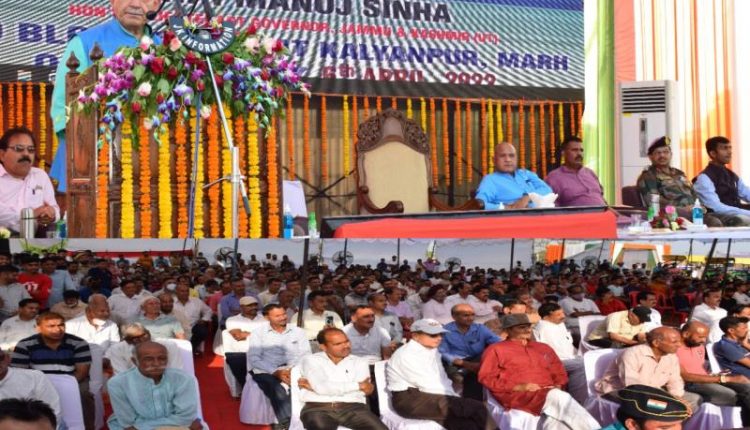 Terming Border village development as the main pillar of the Nation’s development, the Lt Governor said, under the guidance of Hon’ble Prime Minister Shri Narendra Modi Ji, J&K UT is determined to remove the developmental imbalances and truly realize the limitless potential and possibilities of border areas.

Highlighting the reforms introduced to bridge the Rural-Urban gap, the Lt Governor said that an unprecedented Rs 600 Crore has been allocated in this financial year to strengthen border infrastructure, creation of modern agriculture and agro-based small-scale and village industries.

The Lt Governor reiterated the government’s commitment to the goal of providing a better quality of life to the citizens living in far-flung areas by ensuring access to modern health care, education, roads, clean drinking water, skill training, self-employment opportunity for complete spatial and socio-economic transformation of border villages, making them vibrant centers of rural prosperity.

Our focus is on saturation of development schemes benefit, financial inclusion of women and holistic development of each village for inclusive growth, the Lt Governor added.

The Lt Governor urged the PRIs to actively participate in the formulation of the District Plans as per the needs of the local population.

For participatory development and effective empowerment of PRIs, the district plans are being finalized by representatives from all three-tiers of grass-root democracy, he said.

The Lt Governor said apart from various new projects, the long-pending works under Border Area Development Programme (BADP) have been completed. In the district capex, 1158 projects were completed in border villages, he added.

The Lt Governor called for adopting best practices and getting desired results on ground by implementing schemes through convergence mode.

On the occasion, the Lt Governor also highlighted the impact of the governance reforms introduced in the last one and a half years.

The completion of more than 50,000 projects in the previous financial year as compared to around 9,200 projects in 2018-19 speaks volume about good governance in J&K, observed the Lt Governor.

On average, more than Rs One crore has been given to each panchayat for developmental works. Under Aapki Zameen Aap Ki Nigrani in Jammu district, the land records of almost all the villages have been digitized and passbooks have also been issued, in three languages, in most of the tehsils.

In Jammu district, 16,810 new eligible beneficiaries have been added in March this year for pension schemes of the Social Welfare Department. Apart from this, beneficiaries have been linked with other schemes by organizing special panchayat level camps. Mission Youth and Jammu District Administration are facilitating youths in their border belts through Centre for District Youth Training & Empowerment where facilities are being provided to young boys and girls preparing for army, paramilitary forces and other competitive examinations, added the Lt Governor.

It was informed that the BSF will support 80 youths of the area for skill development, besides 35 youth will be part of Bharat Darshan tour. Moreover, the local youths will be provided support for their preparations for Paramilitary and CAPF recruitment, and three medical camps will be organized in the area in coming months.

On the occasion, the Lt Governor launched an E-rent application for direct money transfer to the accounts of all landowners in Jammu district benefitting around 30,000 people whose land is being used by the Armed Forces.

Earlier, the Lt Governor paid obeisance at the Baba Jitto temple at Jhiri and prayed for peace, progress and prosperity of the people of UT.

The Lt Governor interacted with the PRI members of the area and also inspected the stalls installed by various departments. He handed over tractors; land passbooks; sports kits; sanction orders to set up business units, houses under PMAY to the beneficiaries under different schemes, besides wheelchairs/motorized vehicles, hearing aids to specially-abled.

Sh. Bharat Bhushan, DDC Chairperson Jammu, while speaking on the occasion, expressed gratitude to the Lt Governor-led UT Administration for giving dedicated focus towards the development of border areas and villages of J&K.

Sh. Anshul Garg, Deputy Commissioner Jammu briefed about the development initiatives being undertaken by the administration with special focus on border villages.

iednewsdesk Apr 7, 2022
HYBR – the name is a play on ‘hibernate’ – has a mission to “fix the toxic student rental market”.The company…

University of Bristol: New rankings confirm subjects taught at the…