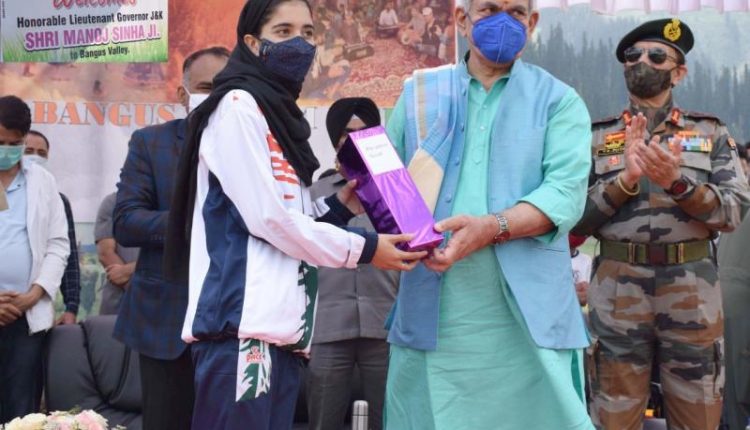 Observing the patriotic fervour and enthusiasm, the Lt Governor said that the spirit of celebration among the local population is a befitting response to all those who try to vitiate the atmosphere of peace and development. He noted that the government is continuously working to reach out to the last person in the queue with all developmental and welfare schemes.

While inaugurating the ‘Bungus Awaam Mela’, the Lt Governor paid tributes to the great revolutionary, freedom fighter Khudiram Bose, on his death anniversary. He also remembered countless others who have made sacrifices and invaluable contributions towards achieving the Independence of our country.

Speaking on the occasion, the Lt Governor observed that J&K is progressing rapidly in every sphere of life and the administration is working continuously towards achieving the goal of building a sustainable and prosperous UT.

To make the Bungus valley environmentally sustainable, the Lt Governor directed the Forests and Tourism Department to chart out viable “Eco-Tourism” plan for the region and all other prominent beautiful grasslands and meadows in the UT. He also suggested for undertaking a feasibility study for starting a cable car in this trekker’s paradise.

“Environment and Development are complementary to each other, we have to prioritize providing facilities in a scientific manner especially in places that are in Ecologically Sensitive Zones”, the Lt Governor observed.

Noting the demands and issues of the Nomadic population living there in the summer season, the Lt Governor directed the concerned officers for installation of pre-fabricated toilets for the seasonal population, besides ensuring drinking water facility without any interruption to all the 2,000 families, among other instructions.

Taking note of the development scenario in district Kupwara, Lt Governor expressed his appreciation for the commendable work done in the roads, education, water and power sectors, despite covid pandemic.

“Kupwara is our Aspirational District, so it is our endeavour to reach out to the poorest of the poor without any discrimination, bring positive changes in their lives through seamless access to government welfare schemes and continuous upgradation of educational, health, and road infrastructure”, he added.

The Lt Governor observed that this year’s Rs 767 crore district Capex budget of Kupwara is three times more than last year. Further, out of the 13,114 works which have been taken up, 5815 works will be completed in this financial year. “100% vaccination has been done in the 45 years above age group above and the figure has reached above 64% in the age group of 18 to 44 in the district”, he added.

“There is no dearth of resources and we are working on bringing about the necessary reforms, removing bottlenecks and minimizing the delay in implementation”, remarked the Lt Governor.

Speaking on the significance of Jan Bhagidari, the Lt Governor impressed upon the public representatives present on the occasion to put in their efforts to strengthen the service delivery system. He urged them to work with the spirit of collective commitment to raise the people’s standard of living.

The Lt Governor observed that for imparting necessary impetus to the handholding of our youth, the vision of youth clubs has been given top priority. He informed that out of 385 panchayats of Kupwara, youth clubs have been formed in 355 panchayats and in the remaining 30 panchayats the work will be completed by August 15.

The Lt Governor said that the UT administration has also started many initiatives like ‘Tejaswani’ and ‘Hausla’ aimed at making women financially independent. He said that 5568 self-help groups are being run by women in Kupwara, to which more than 44 thousand families are directly connected. I also appreciate the role of district administration, banks, and social workers for this because progress in the rural economy is possible only through the spirit of cooperatives, the Lt Governor said.

While concluding his address, the Lt Governor asked the teachers of the Seasonal Schools to celebrate Independence Day with full zeal and enthusiasm involving the children. “The children should be made aware of the immense contributions of our freedom fighters and a special National Anthem and painting competition should be organized on 15th August”, he added.

The Lt Governor also expressed his gratitude towards the army, administration and elected public representatives and all the people present in the Bungus Awam Mela. Over the course of its conduct, different activities including painting, racing, mountaineering competitions, and cultural programmes will be organised. Several NGOs, school children, representatives from various government departments will participate inviting the tourists to explore the untapped beauty of the incredible Bungus meadow. Cleanliness drives by way of collection and disposal of different wastes from the meadow will also be organised.

Shri Irfan Panditpuri, DDC Chairman, PRI members, besides large number of children and local people were present on the occasion.