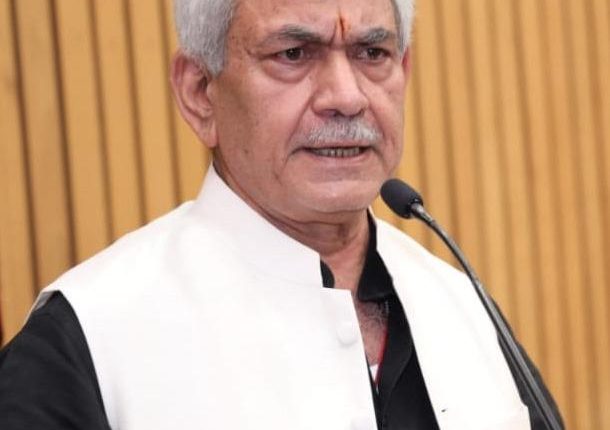 To restore the rich social fabric of the land, the government is committed to the return and rehabilitation of Kashmiri Pandit community in the valley Language is essential not only for culture but also for brotherhood, friendship, and unity: LG “Kalhan’s Rajatarangini and the Kushana literature talk about the flourishing Handicraft enterprise of the valley. Schemes like UMEED, SAATHI and KARKHANDAR are aimed at giving a fresh impetus to this sector”, LG Says in the field of school education post covid, we must inculcate the problem-solving skills, logical, creative and scientific temper in the child “A strong sense of responsibility amongst the people of Jammu and Kashmir is bound to take our land to the pinnacle of success and we must all become equal partners and companions in this glorious odyssey”: LG · Accelerated Recruitment Committee has been set up and instructed to fast track the pace of recruitments which has suffered on account of the pandemic

SRINAGAR : In this month’s episode of “Awaam ki Awaaz” radio programme, aired today on all local & primary channels of All India Radio (AIR) in the UT and broadcast on the Channel DD Kashir, Lieutenant Governor, Manoj Sinha spoke on the need for the rehabilitation of the displaced communities from the valley and outlined the recently launched online facility whereby the aggrieved families can submit their applications to get justice with respect to their immovable properties.

“To undo the injustice of decades, we are committed to bring back all the families who were forced to leave in despair, and restore the culture of glorious brotherhood in the valley”, he added.

In today’s episode of Awaam Ki Awaaz, he spoke on the suggestion of Sanjay Kumar Pandita who had written on the need for introducing the teaching of Sharda script at various levels of education. He also mentioned Sadaket Ali from Doda who suggested for the creation of separate sections for Bhalesi, Bhaderwahi, Padri, Sarazi and Poguli in J&K Academy of Art Culture and Languages. The Lt Governor informed that the government is conscious of the need and is determined to promote the forgotten and local languages through a comprehensive program. He also spoke on the existing arrangement whereby the scholars are provided with adequate opportunities to read and research on the Sharda script at both the State Archives and the State libraries in both Jammu and Srinagar.

The Lt Governor emphasized that the UT administration is committed to providing training, mentoring and intensive capacity building through initiatives like SAATH and UMEED, primarily aimed at reinforcing the rural women enterprise. There are schemes like KARKHANDAR which are aimed at giving a fresh impetus to the training in handicraft sector in the UT. These initiatives gain strength from the suggestions of Chander Kumar Bhushan from Ramnagar and Dr. Arif from Srinagar, who make an interesting case for the promotion of handicrafts and the revival of Copper Utensils Small scale industry of the valley, respectively.

To a suggestion from Prof. Geer Mohammad Ishaq from Srinagar who had delved upon some of the most thought-provoking steps related to reforms in school education, the Lt Governor underlined the indispensable need for inculcating the problem-solving skills, logical, creative and scientific temper in the children in the realm of education in post covid scenario. He also outlined the efforts of the Department of School Education which is working continuously on the lines of the New National Education Policy.

On the issue of Infrastructural delays and approvals, and the need for climatic specific construction techniques highlighted by Vickey Mattoo, the Lt Governor said that since last August, a total of 21,943 projects have been completed and with the incorporation of many best practices, a new era of Accelerated Project Finalization and Approval has been ushered in J&K. These decisions are based on adoption of innovative techniques in the project execution, discussions with the stakeholders and engaging with the best minds of the fields and are aimed at reforming and streamlining the process of infrastructural development in JK.

To the ideas of Muzamil Mir and Tanveer of Bandipora, and Sumit Puri of Jammu, all talking about the need for streamlining and speeding up the process of recruitment of youth, the Lt Governor added that the Jammu and Kashmir Administrative Council has recently constituted the Accelerated Recruitment Committee that has been set up and instructed to fast track the pace of recruitments which suffered on account of the pandemic. He also focused on the aims, objectives, and gains of the Mission Youth under which a new program has been launched to develop 75 tourist villages and provide financial assistance of Rs. 10 Lakh to the Self Help Groups of youth. Also, the roadmap of initiative like BACK TO VILLAGE, HAUSLA, TEJASWINI, UMEED, SAATH were also laid out, all of which aim at creating an ecosystem of women entrepreneurs in the UT so that a system of true financial independence can be established.

Mentioning Joginder Bhandari who had passionately written on engaging the local youth in the big power projects, the Lt Governor assured that no outsider will be given jobs in posts where the local youth are qualified and that the overall mechanism is always created to cater to the needs of local people in the best possible way.

The Lt Governor lauded Deepak Suri and Aamir Nazir whose suggestions complement government’s commitment to promote electric vehicles and create a sustainable future for the masses. On the suggestions of Ehsan Quddusi and Shahid Ahmad Bhat for the need to provide crop specific suggestions and training to the horticulturists, the Lt Governor outlined the detailed plan of the administration whereby phase wise training is being provided to the horticulturists, instructions have been provided to Krishi Vigyan Kendras to solve regional problems of farmers and information facility is provided to the farmers by means of the database prepared by the Agriculture and Horticulture department in collaboration with districts and Krishi Vigyan Kendras.

The Lt Governor also shared the suggestions of Priyanka Sharma from Kishtwar and Virender Thakur from Doda, both of whom have shared a detailed outline on the promotion of Tourist circuits in their respective districts. He also lauded Rhitik Jamwal who wrote extensively on creating a Green Jammu Kashmir drive in the schools.

Concluding his address, the Lt Governor added that a strong sense of responsibility amongst the people of Jammu and Kashmir is bound to take our land to the pinnacle of success and he wishes to see all of us become equal partners and companions in this glorious odyssey.