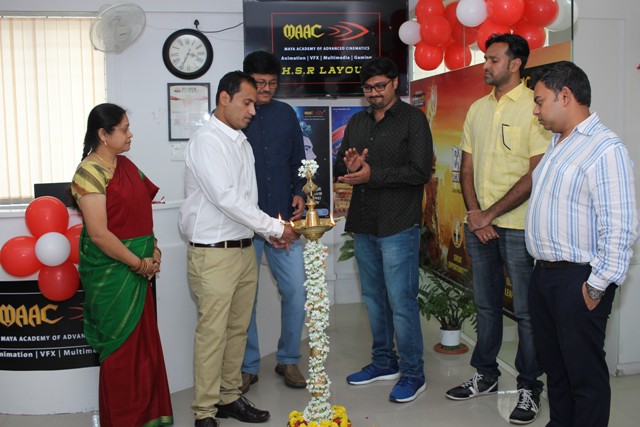 Bengaluru: Maya Academy of Advanced Cinematics (MAAC), India’s premier educator in high-end 3D animation and visual effects, today announced the launch of its 10th MAAC centre in Bengaluru. The decision to open the new centre on HSR Layout (Hosur-Sarjapur Road Layout), is part of MAAC’s strategy to expand its presence in the Tier-II cities of Karnataka in the next six months.

Innauguration of Bengaluru centre.jpgHSR Layout, a new suburb located in south-east Bengaluru, is also often referred to as the gateway to the IT hub – Electronic City. In addition to ten centres in Bengaluru, the company also has one centre each in Mangalore and Mysuru.

Commenting on the new centre Shajan Samuel, AVP, Aptech Ltd said, “With its proximity to the IT Hubs, MAAC HSR will offer students a chance to also engage with the IT industry. With state of the art facilities and the latest 3D animation and visual effects technology that meets international standards, MAAC strive to offer students a comprehensive education in the growing field of 3D Animation and VFX. Our vision is to expand in tier-II cities of Karnataka and we see tremendous potential here. Bengaluru is not only an education and IT hub of Karnataka; it also witnesses large population of aspirants from nearby states who wish to explore a career in animation and cinematics. Along with our Bengaluru centers, we plan to open centers in Belgaum, Hubli, Gulbarga, and Shimoga within the next six months. We are constantly trying to better ourselves with each centre by providing a global exposure to the students. These new centers will be an opportunity for all students to achieve superior training with our extensive curriculum.”

On the occasion of National Girl Child Day, Union Minister…

M. Amruth Kulkarni Director MAAC HSR – said he was delighted to Join with India’s leading Animation , VFX and Multimedia training brand MAAC and said it was an opportunity for students to harness their craft so that they can advantage of the numerous jobs within the media and entertainment industry.

Bengaluru is already the hub for animation and VFX in India. Some of the top global companies like DreamWorks Animation, Technicolor, MPC and also some of the very successful Indian studios like Xentrix Studios, Dhruva Interactive, and Moonfrog Labs operate out of here.

MAAC has been a pioneer in animation and VFX training across the country and MAAC HSR will offer students an opportunity to learn 3D Animation, VFX, Multimedia, Graphic & Web Designing, from the leading experts of the industry.

A recent report, jointly prepared by KPMG and FICCI, notes that the animation and VFX industry grew by 16.4% in 2016 as compared to the previous year. The animation business is has become a ₹59.5 billion industry. Key factors of growth have been increasing use of VFX in domestic film production and a growing emphasis on growing animation in content by broadcasters. These factors are also expected to grow the animation and VFX sector going forward at upwards of 17% rate. With more and more film-goers hooked to flying humans and stomping monsters, the Indian Animation and Visual Effects (VFX) industry has grown considerably.

In order to cater to the growing need of animators in various segments, the centre will offer advanced cinematic courses in animation, visual effects and multimedia. Some of the flagship courses such as – AD3D EDGE, ADMD, VFX Plus, Max Pro and Maya Pro will be available at the centre.