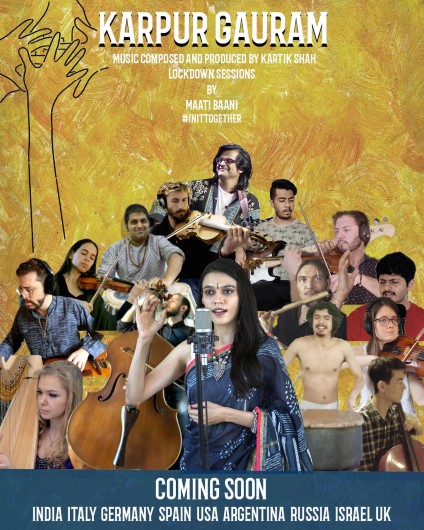 New Delhi: Known for their collaborations, the duo Maatibaani comprising of Indian Classical Vocalist, Nirali Kartik and composer producer, Kartik Shah, have reimagined an ancient chant to offer hope and positivity to the people amidst the ongoing lockdown during this daunting pandemic.Karpur Gauram is a chant found in Yajurveda, the ancient text that dates back to 1200 to 1000 bc. MaatiBaani had composed this track for a popular tv serial Devo Ke Dev Mahadev.

The song features musicians from different countries such as India, Italy, Israel, USA, Switzerland, UK, USA, Argentina, Spain, Russia. The pandemic feels like nature telling humanity to live in harmony with nature and with each other. We are but mere witnesses to the sheer magnitude of something like the current times.To depict this, Maatibaani has used instruments like taiko drums, orchestral gongs and also, the drupad styled vocal depicts the totality of how nature has grappled humanity in just one strike.

Maati Baani quotes,“These are testing times for the entire humanity. Through “Karpur Gauram” we wanted to offer positivity and hope; that this too shall pass.”

Maati Baani’s previous viral hits have been Heal the World Cover, folk songs like Banjara and some of the other collaborations with artists Ankita Joshi, Vidya Vox, Shankar Tucker and many others.The aim of the songs is always to offer hope, positivity and empowerment along with entertaining the listeners.

The staggeringly amazing features of this video are;
– It’s made during the lockdown period and all the other collaborators are from lockdown countries as well.
– Most of the footage has been shot on phones and recorded in homes of the artistes.
– The song took 20 days straight of working with different musicians across the globe
– The song features rare musicians as well as rare artistes.