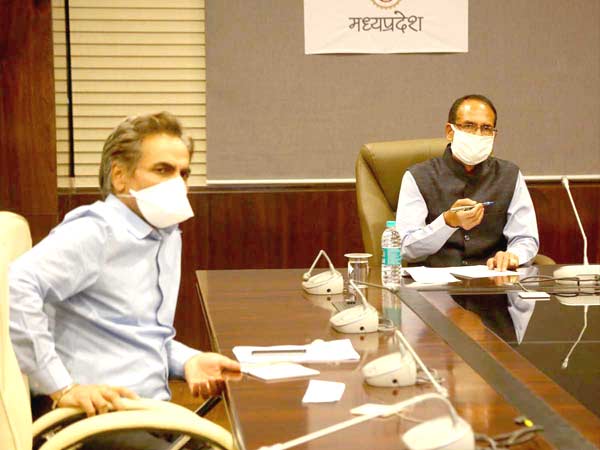 Chief Minister Shri Chouhan inaugurated the ‘Gharib Kalyan’ Week from the Statewide Poshan Mahotsav. The Mahotsav was celebrated simultaneously at more than 97 thousand Aanganwadi centres. Programmes were organized at 23 thousand 922 gram panchayat headquarters, more than 6 thousand wards of 376 urban bodies, 313 janpad panchayats and district headquarters. Village nutritional management strategy in Gram Panchayats and ward nutritional management strategy in wards were released. The virtual programme was broadcast on all major channels including Doordarshan. Along with this, a large number of people joined the programme through Twitter, Facebook and webcast.

Chief Minister Shri Chouhan said that Prime Minister Shri Narendra Modi is the architect of a glorious, powerful and magnificent India. Whatever he did, he did it with full passion and vision. Whether it is protecting the borders of the country, the concept of building an Atmanirbhar Bharat or the schemes for the welfare and development of the poor, the efficient leadership of Prime Minister Shri Modi reflects from every activity. Chief Minister Shri Chouhan said that from the birthday of such a dynamic Prime Minister, who is always concerned about the poor, the State Government has decided to conduct programmes for the welfare of the people under ‘Gharib Kalyan’ Week.

Chief Minister Shri Chouhan said that the work is being started on Poshan Sarkar through nutritional management strategy. We believe that it is necessary to connect the society in the fight against malnutrition. In this regard, Annapurna Panchayat will be set up in every village. Panchayats, urban bodies, self-help groups, school management committees, forest management committees besides others will be connected with Annapurna Panchayat. This panchayat will have the responsibility to monitor the quality of nutrition and health services. Shri Chouhan appealed to keep ‘Poshan Matka’ (Nutritional Earthen Pot) in every village. He said that fruits, vegetables, grains etc. should be collected in the pots, kept in the Anganwadis, with the help of affluent families. These should be used in enhancing the nutritional level of weak children and women. Chief Minister Shri Chouhan said that he will ensure that fruits and vegetables from the ‘Poshan Vatika’ (Nutrition garden), established in the Chief Minister’s house go to the nutritional pot of the nearby Anganwadis.

Chief Minister Shri Shivraj Chauhan said that the Ladli Laxmi Yojana was started to establish the idea ​​ to consider daughters and sons as equal instead of just considering the girls for household chores ​​‘Roti Banao-Kanda Thapo ki Jagah Beti-Beta Barbar Maano’ and to change the mindset of the society towards daughters. ‘I am happy that the girls, who were given NSCs at little age, are pursuing studies in 9th to 10th class today and are dreaming of becoming doctors and collectors. Our government is committed to provide equal opportunities to daughters. With this purpose, schemes have been launched for their support and welfare at every stage from birth to employment and marriage. Shri Chouhan said that violence against girls and women will not be tolerated in the state. Strict action will be taken against those who commit such acts. Respect, security and equality to daughters, sisters and mothers are paramount for the government.

Eight lakh children to get milk

Chief Minister Shri Chouhan administered the nutrition resolution to make the state free from anaemia and malnutrition as well as to move towards development and make the state a well-nourished state by effectively implementing nutritional strategy.

Chief Minister Shri Chouhan said that the responsibility of pre-primary education for children up to 6 years of age is now being entrusted to the Anganwadis under the National Education Policy.

On this occasion, Chief Minister Shri Chouhan interacted with girls and women from different places of the state. He sought information about the operation of Anganwadis, Ladli Laxmi Yojana etc.

Dia Suman said, she will become a collector

CM happy after conversation with Khushi

Do you feed the nutritious food packet or just throw it

Chief Minister Shri Chouhan told Smt. Rekha Pandram of Tejaswini Group that you have made Kondo Kutki famous in the country and the world. During a conversation with the self-help group of Dindori, Smt. Rekha Pandram said that the burfi, biscuits etc. made from Kondo Kutki is being sold through Madhya Pradesh Tourism. Each unit earns a net profit of Rs 20 to 25 thousand in a month. The Chief Minister asked other self-help groups of the state to take inspiration from this and take initiative to make nutritious food from local food items.