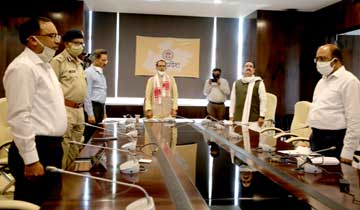 Bhopal : The Prime Minister Shri Narendra Modi paid tribute to the martyred army officers and soldiers before the start of the video conference with the Chief Ministers of the states today. The Chief Minister Shri Shivraj Singh Chouhan also paid homage to the martyred Army personnel. The Minister for Home and Health Dr. Narottam Mishra, Chief Secretary Shri Iqbal Singh Bains and DGP Shri Vivek Johri were present on the occasion.

Along with the Prime Minister Shri Modi, the Chief Ministers present at the video conference also observed two minute silence in their respective V.C. rooms and paid tribute to the martyred army personnel.

The Prime Minister Shri Modi said that every citizen of India is hurt by the incident happened on LoC in East Ladakh yesterday. We pay tribute to the Army Officers and Soldiers for their supreme sacrifice. Shri Modi further mentioned that India gives highest importance to its integrity and sovereignty. India always wants peace, but if someone plays foul with the country’s integrity and sovereignty, India is also capable to respond appropriately. He further mentioned that sacrifice is part of our national character. Valour is our identity. It has always been our effort that differences should never become dispute. India always believes in working closely with neighbours. Prime Minister Shri Modi said ‘I want to assure the country that unity and sovereignty will be given paramount importance’. The whole country is with the families of the martyred Army personnel. We will protect every inch of our land and self-respect.

University of Exeter: Scientists and industry to discuss energy…