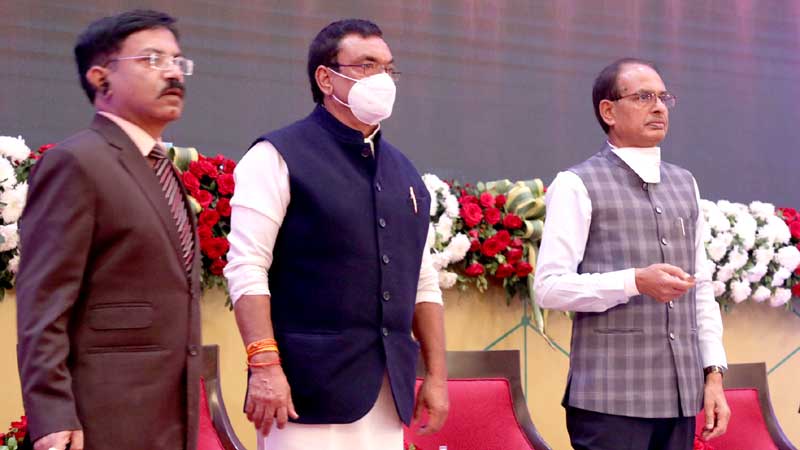 Bhopal : Chief Minister Shri Shivraj Singh Chouhan has said that the state government has taken several steps for the empowerment of women. Empowering self-help groups is an important step in this. Continuous work will be done in this direction so that the women become empowered and become partners in the creation of a strong society. Women of the state will not be allowed to remain poor. The work of forming self-help groups, training them, providing them bank linkages and providing economic benefits by taking advantage of marketing will continue. The work of preparing nutritious food will no longer be done by contractors but women self-help groups. The products of these groups will be able to reach other countries through the portal. This will be a great means to eradicate poverty. Madhya Pradesh Aajeevika Mart was also launched on this occasion.

While transferring an amount of Rs 200 crores in the accounts of self-help groups at a programme organized by Panchayat and Rural Development in Minto Hall Sabha Room today, Chief Minister Shri Chouhan, said that these groups in Madhya Pradesh will now be taken beyond making badi, pickles and papads, and linked to construction of kitchen sheds, leveling of waste land, work shed construction, well construction, cattle shelter building, storage building and animal husbandry. These new responsibilities will empower women financially.There is no work that our women cannot do. A short film based on the success of the groups was screened during the programme. Chief Minister Shri Chouhan also launched the new portal http://shgjivika.mp.gov.in/mpmart/index of the department, which will ease the work of selling the products of the villages. With this, registered groups, government institutions and individual consumers will be able to earn more profit by selling. Efforts are being made to improve the economic condition of 10 lakh families in the state. Financial assistance has been provided to more than 3 lakh self-help groups of more than 35 lakh rural poor families in the state. A total amount of Rs 2237 crore has been distributed in the state.

Congratulations for bagging second place in the country

Chief Minister Shri Chouhan said that self-help groups have done important work like making masks in the state during Corona crisis. Women of these groups fulfilled their responsibility in protecting the state’s population from Corona virus. For this, the women self help groups deserve to be congratulated. The working capacity of these women is actually remarkable. A total of Rs 1400 crore will be provided to the groups this year. This year an amount of Rs 883 crore has been distributed to the groups against the distribution of Rs 175 crore last year. Madhya Pradesh is second in the country by distributing more than Rs 708 crore as compared to last year. The credit for this goes to the women of the groups and the Panchayat Rural Development Department. Chief Minister Shri Chouhan provided funds to women of self-help groups of Bhopal district. As a symbol, funds were given to five groups. Among those who received the amount are Maya Didi, Seema, Rinkle, Sunita, Anita, Tara, Rukmani Didi, etc.

Will provide maximum facilities to women

The Chief Minister said that apart from empowering girls and women through self-help groups, work is being done to benefit them through other schemes. In the previous years, women have been provided benefits including bicycles to go to school, amount for nutritional food after pregnancy and childbirth, implementation of Sambal Yojana and Ladli Laxmi Yojana.

Women should become partners in the campaign against drug addiction

Shri Chouhan said that a campaign has been launched against the mafia in the state. Along with this, several steps have been taken to save the youth from drug addiction. Women can also assist in this work by preventing children from drug abuse.

Women should also be helpful in Beti Bachao Abhiyan

The Chief Minister said that government departments are active to ensure that there is no crime against women and to speed up the Beti Bachao Abhiyan. Our women should also assist in this task. Economic offenders who dupe people in the name of chit fund, who commit hooliganism will not be spared. Women should also extend support in these efforts.

This loan disbursement has taken place for the third time in the last five months. Bank loans worth Rs 207 crore were distributed to the members of self-help groups formed under the State Rural Livelihood Mission. Earlier, Shri Chouhan had disbursed loans in virtual programmes on September 20, 2020 and November 23, 2020. The Mission has so far disbursed bank loan worth more than Rs two thousand 30 crore to self-help groups.The Panchayat and Rural Development Department has provided benefits to beneficiaries by organizing virtual programmes regularly since lockdown to strengthen the economic condition of rural families during the Corona period.

Panchayat and Rural Development Minister Shri Mahendra Singh Sisodia said that the government is promoting rural women. Chief Minister Shri Chouhan deserves to be congratulated for this. Through regular reviews, he has given pace to this work.

By linking women from poor rural families with self-help groups under Madhya Pradesh Rural Livelihood Mission they are being socially and economically empowered. Generally, people in rural areas are deprived from the benefits of various schemes despite being eligible, due to difficulty in documentation and other formalities in banking service processes. With a view to further simplify this process, the State government has also resolved to provide adequate bank loans for self-help groups by establishing coordination with banks on a large scale.