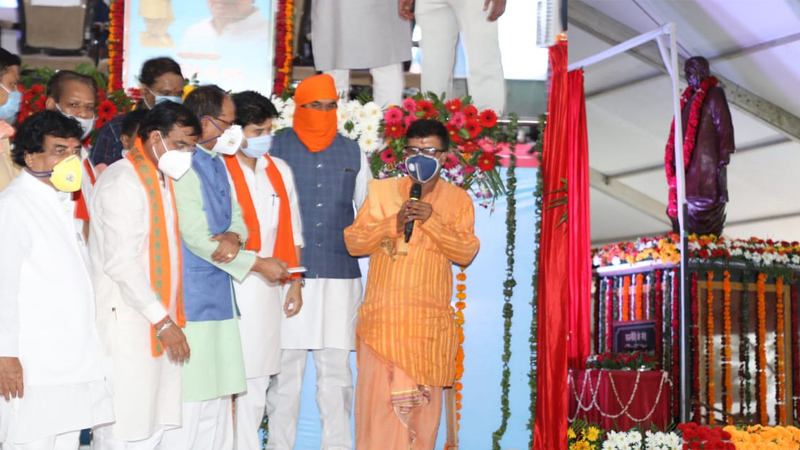 Bhopal : The Chief Minister Shri Shivraj Singh Chouhan unveiled the statue of the Former Chief Minister Late Shri Kailash Joshi in Hatpipalya of Dewas district on Tuesday. On this occasion, he announced that the Bagli tehsil of Dewas district will be made district. He also announced that the micro irrigation project of 96 thousand 800 hectare irrigation capacity costing Rs. 2 thousand 540 crore in Hatpipaliya and Nal-Jal Yojana worth Rs. 241 crore too for 103 villages will be approved soon. Members of Parliament Shri V.D. Sharma and Shri Jyotiraditya Scindia also addressed the programme.

The Chief Minister distributed forest right lease deeds (pattas) to the beneficiaries and presented cheque of Rs. 10 thousand to each beneficiary of the Street Vendors scheme. Recollecting the memories of the Former Chief Minister Late Shri Kailash Joshi, the Chief Minister said that he will always guide us. Hatpipalya was not only his Janmbhoomi but it was also his Karmbhoomi. Paying respect to the wish of Late Shri Joshi, Shri Chouhan made the announcement to upgrade Bagli tehsil into a district. He mentioned that we all together will make Madhya Pradesh number one state once again. Shri Chouhan said that the previous government had put the burden of interest on the shoulders of farmers, we will relieve the farmers from this burden. All forest dwellers will be made owners of land by providing pattas to them.

The Chief Minister Shri Chouhan further stated that pension has been deposited by the government in the accounts of elderly. Rs. One thousand has also been deposited in the accounts of each migrant labourer. At present, three months ration has been distributed to poor. Free ration will be given to all poor till November. The Chief Minister Shri Chouhan said that Madhya Pradesh has set a new record by procuring one crore 29 lakh MT wheat this season. Sambal yojana has been restarted. At the same time, complete arrangement for education of children is being made. He suggested people to take full precautions during corona crisis and administered resolve to the people present on the occasion to combat with corona and for making Madhya Pradesh a Atma-Nirbhar state.

The Former Union Minister and Member of Rajya Sabha Shri Jyotiraditya Scindia said that the background of the former CM Late Shri Kailsah Joshi was of public service. He ruled hearts of the people. He used to say that today people come into politics to become leader. Late Shri Joshi used to say that an individual only moves on the path of development and progress, when he/she works for the upliftment of poor. The Government has completed 100 days. Several schemes have been implemented in these 100 days, he added.

The Member of Parliament from Khajuraho Shri V.D. Sharma said that Late Shri Joshi had played an important role in the rise of party. He established the values in politics. He further mentioned that Madhya Pradesh has bagged Karishi Karman award constantly for 5 years under the leadership of the CM Shri Chouhan.

The Member of Parliament from Dewas-Shajapur constituency Shri Mahendra Singh Solanki stated that Late Shri Joshi was emotionally connected with the people of this area. We all are overwhelmed with emotions with the unveiling of his statue. The former Minister Shri Deepak Joshi also addressed the programme.

The Former MLA Shri Manoj Chowdhary informed that approval for construction of 10 roads under the first phase has been granted by the Chief Minister.