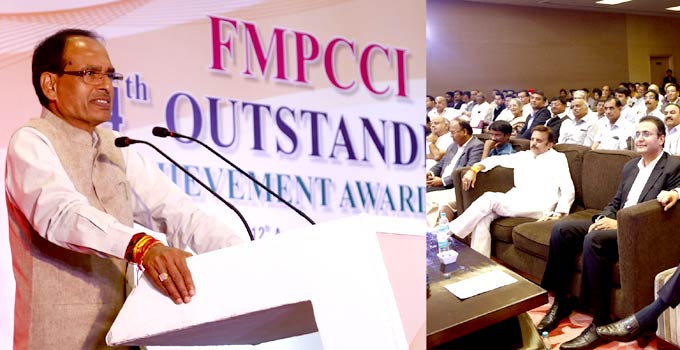 CM Shri Chouhan stated that youth must come forward to tackle the prime challenges of present era. Efforts to eliminate terrorism mentality are must to finish terrorism. Moreover, devotional activities are needed to eradicate poverty considering poor as Lord. Shri Chouhan said that works on Poor Welfare Agenda are being undertaken in the leadership of the Prime Minister Shri Narendra Modi. Basic amenities and facilities like ration at low prices, free education, scholarships and other economic assistance, medical treatment and housing facility are being made available to help poor in Madhya Pradesh also. Shri Chouhan further stated that additional activities are required to bring women which constitute half of world’s population at the equal level. Efforts for women empowerment has been made in the real sense in Madhya Pradesh. Women are being involved in government mechanism here. Reservation in urban bodies and government services has been made for them and concrete works related to the social security of girls since birth have been carried out in the state. Similarly, effective efforts are must for encouraging talent and therefore Mukhya Mantri Medhavi Vidhyarthi Chhatravratti Yojana has been launched in the state.

Shri Chouhan laid emphasis on need for secured environment for future generations. He mentioned that balance between development and environment is must. Nature should be utilized, exploitation is not proper. He also informed about the efforts made in the state regarding environment conservation. Shri Chouhan said that problem of addiction is becoming serious before the world. Efforts are needed to make the world free of addiction.

Welcoming the participants, Shri Chouhan said India and ASEAN countries enjoy relations since ancient times. Their views, traditions, culture and heritage are common. He stated that a philosophy towards path of peace was originated first in India in the form of Mahatma Buddha. Shri Chouhan mentioned that Madhya Pradesh is the fastest progressing state of the country. The state is full of cultural, historical heritages, forest and wild life prosperity. Chief Minister Shri Chouhan called upon the participants to observe heritages of the state. Moreover, he mentioned that participants will always be welcomed warmly in the state.

Union Minister of State Shri V.K. Singh said that the youth leaders are the builders of the future policy. The experiences of the summit will inspire youth on innovations and their implementation. It will lighten up their path to realise dreams of their future. He said that the beliefs, destiny and past of the Indo-ASEAN countries strongly connect them to each other. He said that the Indo-ASEAN area’s population is young which will be the basis of our power in the world in future. Shri Singh said that the source of innovations in GDO, industries in the region is youth power. He expressed the hope that the mutual ties between the youth during the summit will form the base of the joint ventures in future. Shri Singh said that the effective efforts taken in Madhya Pradesh for the welfare of various categories should be studied carefully. This will assist the participants in their better implementation as per prevalent circumstances.

Secretary in External Affairs Ministry Sushri Priti Saran threw light on the efforts to strengthen mutual ties between Indo-ASEAN countries. She said that study and training programmes for parliamentarian and diplomats are also organised during political security, economic, social, cultural support programmes. She said that the experiences of the participants and their conclusions will decide the region’s governance and policy making in future.

Well-known film actor Shri Anupam Kher has said that India was a slave for a long time but we always remained happy and continued to remain so. As a result of the capacity for tolerating the bad times and maintaining our inner joy, we have been able to keep our culture and traditions alive. Shri Kher was having an inspiring dialogue with youths from different countries taking part in the Indo-ASEAN Youth Summit.

Shri Anupam Kher said that the representatives have come here from different countries but their culture, traditions and sensitivities remain the same. The objective of the summit is to express and strengthen this solidarity prevalent in these countries. He spoke to the representatives of Thailand, Brunei, Myanmar, Croatia, Maos, Indonesia, Singapore and Philippines. Shri Kher said that 90 per cent of life is full of uniformity and one should have the courage to live through this with positivity. India Foundation Director Shri Dhruv Katoch proposed the vote of thanks.