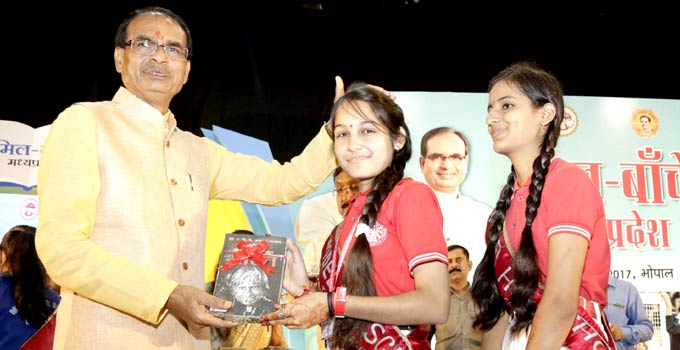 Bhopal : Chief Minister Shivraj Singh Chouhan reached Government Middle School at MANIT premises in Bhopal in the role of a teacher under the Mil Banche Madhya Pradesh Abhiyan to teach children. Shri Chouhan taught the students about the mantras for success in life through incidents and stories. More than 2 lakh 15 thousand elite citizens today reached different government schools of the state and taught children.

Chief Minister Shri Shivraj Singh Chouhan ‘s affinity and love for the children was clearly visible during the programme. When the CM was distributing books, children unhesitantly thanked him saying ‘Thank You Mamaji’. When he was telling them about the Mukhya Mantri Medhavi Vidyarthi Yojana, he asked them if they had no money to pay their fees for admission in Medical , Engineering College, who would pay their fees, all children replied in unison –“Shivraj Mamaji”.

Chief Minister Shri Chouhan conversed in a most simple and effective manner with primary and middle school kids. Inspiring children to do good deeds, Shri Chouhan said that only those people are successful in life today who are supportive in the progress of the society and country. Shri Chouhan explained to the students to inculcate the knowledge that they gain through books in their behavior. Small good habits make a person great, he said. Shri Chouhan inspired the children to respect their elders, always speak the truth, maintain cleanliness and plant saplings. He said that it is equally important to play games and spend time with friends along with regular exercise as this helps strengthen one’s mind, be happy and stay healthy. Encouraging children to secure good marks, Shri Chouhan said government will pay the fees for education of students who secure more than 75 per cent marks in 12th standard.

Explaining the importance of oxygen for life, blind felling of trees which is a source of oxygen and the ill-effects of pollution in a questionnaire form, Chief Minister Shri Chouhan said that the sudden rise in temperature is leading to natural calamities. If felling of trees and pollution of water resources is not stopped, human life can be in deep trouble. He educated the children about maintaining cleanliness in their surroundings to avoid seasonal diseases.

Chief Minister Shri Chouhan narrated inspirational stories like the birds and the hunter, Satyavadi Yudhishthir and incidents related to Father of the nation Mahatma Gandhi.

He made children read out stories from the books and solve Math problems. Shri Chouhan presented them with gifts to inspire them and resolve to improve standard of education. The Chief Minister inspected the Smart Class in the school and planted saplings in the school premises.

CM in the role of an ideal teacher

Chief Minister Shri Chouhan displayed the role of an ideal teacher in the school under the Mil Banche Madhya Pradesh Abhiyan. He established such an enlivening connection with children through his conversation that they rushed to him on his call. Shri Chouhan made Amit Kushwaha, a student of Class 8th read a lesson “Muktanand Ji” from textbook “Bhasha Bharati”. Student of Class 4th Radhika read out a lesson ‘Samay Bada Anmol”. Class I student Krish recited a poem ‘Jisne Suraj Chand Banaya’ from Bal Sulabh with ease. The Chief Minister tested the numerical abilities of the students in the most natural manner. He made student Ayushi add a sum of first two numbers. Then he made a 5th standard student Dipti add a sum of three numbers each. He also made them do subtraction of a sum of four numbers which was correctly solved by a Class 8th student Akshay. He spoke affectionately with Student Leader Environment Shalini and Kanak.

Teachers should pay attention on personality development of students with teaching

Conduct and Behavior of Children should be Similar: CM Shivraj Singh Chouhan